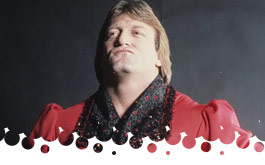 - Hosted by Vince McMahon and Bruno Sammartino, taped on January 7th from the Mid-Hudson Civic Center in Poughkeepsie, NY. We're promised to see the match between George "The Animal" Steele and "Macho Man" Randy Savage from the recent edition of Saturday Night's Main Event (courtesy of NBC). Also, in action, Terry Funk, The Magnificent Muraco, the tag team of the Junkyard Dog and Paul Orndorff, and a Six-Man Tag with the "Very Special" Hillbillies. That was Vince's wording, not mine.

I don't think we've seen this combination before (Orndorff and the Dog, not X and Mirto). The babyfaces come out to "Grab Them Cakes" for the obvious reasons (got to sell those albums). Orndorff is still sporting a cast to sell the bounty that was put on his head. The JYD starts, causing the opponents to have a brief conference. Mr. X is quickly caught in a wristlock. Orndorff comes off the ropes with an elbow and picks up with working on the arm. JYD no-sells having his head rammed into the turnbuckle. Mirto tags in and is peppered with right hands. He backs into the wrong corner and gets snatched by Orndorff. Total babyface move. Mr. X tags in and gets a few punches in before Orndorff clobbers him and connects with a dropkick. X gets tossed over the top rope and Orndorff flexes. Back inside, Orndorff clotheslines X with the cast and finishes with the piledriver at 3:25. JYD continues to be the laziest worker on these tapings, literally doing a wristlock and throwing a couple of punches, all at half-speed.

- Lord Alfred Hayes is standing by with this week's "Update." Big John Studd and King Kong Bundy's combined efforts took Andre the Giant out of action, as we see clips from nearly 3-months ago from Toronto's Maple Leaf Gardens. Now Andre is back and BURNING with anger. I half-expect to see an Update on last year's WrestleMania with how far back these Update segments like to dig.

No attempt from The Fink to get over the "Terrible" nickname that the WWF was desperately trying to attach on Funk's name. Lockup, Funk grabs a side headlock and comes off the ropes with a shoulder tackle. He plants Gee with a slam, but Gee pops up and gives Funk three slams of his own, sending Funk to the floor for a breather. Back inside, Funk backs Gee into the corner and lights him up with a chop. Gee fights back and slowly runs into the corner with a knee. Funk shrugs him off, connects with a pair of headbutts, and puts him down with the sleeper hold at 2:27. Post-match, Gee gets branded. Funk gave Gee a little too much here, but he still won with relative ease. McMahon says Funk is the meanest Texan to ever step off the prairie.

- "Mean" Gene Okerlund hypes the card at the Boston Garden on February 8th, headlined by Bruno Sammartino and Roddy Piper inside a Steel Cage.

Dose is incorrectly identified on-screen as "Paul Rose" despite Fink hitting the "D" hard. Lockup into the ropes and Muraco gives a clean break. Muraco with a hip toss and knee into the back of the head. Bruno gives Muraco credit where it's due despite his antics in the ring. Loud "Beach Bum" chant as Muraco tosses Dose out of the ring. He geek gets caught in the ropes and surprisingly doesn't get whacked by Fuji. Vince calls it "somewhat embarrassing." Back inside, Muraco takes Dose over with a suplex. Sammartino says Muraco wrestles based on his mood. Muraco with a gut-wrench suplex. McMahon calls Dose the proverbial punching bag, as Muraco has done the opposite of Funk and given the geek nothing. Muraco puts the boots to the guy and connects with a back breaker. He slaps Dose around a bit, hits him with a gut buster, and finishes with the Spike Piledriver at 3:16. If only Muraco was eating a sandwich as he punished his opposition. Not one mention of his feud with Ricky Steamboat, for those curious, but Vince talks about Muraco wanting to venture into Hollywood as a leading man. OH, YES.

- WrestleMania 2: WHAT THE WORLD IS COMING TO. FINALLY! 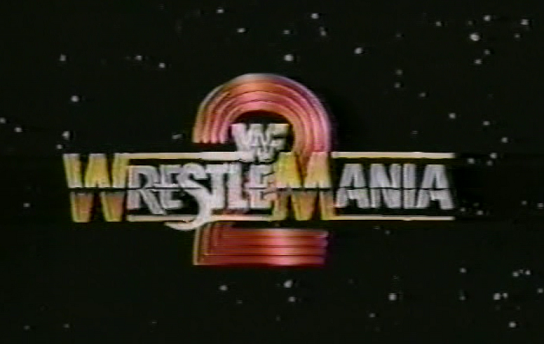 - More hype for the Boston Garden, where Tito Santana defends the Intercontinental Championship against "Macho Man" Randy Savage. Okerlund says Santana played for the Kansas City Chiefs, and coincidental enough, he's a Patriots fan, holding up a Patriots shirt. He compares himself to the Patriots, who were considered underdogs for their entire playoff run that year, which makes Savage the nearly unbeatable Bears. You deserve to lose, Tito.

I love that the Bulldogs are just from "England." Davey Boy starts, grabbing a side headlock on Gibbs and coming off the ropes with a shoulder tackle. Bruno says the Bulldogs can take the Tag Team Titles from Valentine and Beefcake. Dynamite with a shoulder tackle, snap suplex, and scoop slam. Davey Boy back in, taking Carabello over with a suplex, followed by a fisherman suplex for a near-fall. Bulldogs with a double headbutt, followed by Dynamite's signature hooking clothesline. Whip to the ropes and the Bulldogs with a double shoulder tackle. Davey Boy straddles Carabello across the top rope and Dynamite brings him down with a super-plex for three at 2:58. Those old WWF rings had no give. Crowd goes wild for the Bulldogs, who worked unlike any other team in the company. They stretcher the poor geek out to sell the effects of the super-plex.

- Piper's Pit with the Tag Team Champions, Greg Valentine and Brutus Beefcake, managed by Johnny Valiant. Piper calls them the best tag team combination the world has ever seen. Valentine brags about being Champions since winning the belts in Philadelphia back in August. What of Captain Lou? Beefcake says Lou eats more cheeseburgers than the New York Jets, and makes fun of the puppy dogs he manages. The Bulldogs detour from their path to confront the Champions, and Albano demands a title match on their behalf. Valiant asks who have they beaten that mean anything? Lou says they've beaten everyone and want the belts, and they want that shot on television. Piper suggests they do it next week, but Valiant says he'll think it over as he plucks at his beard, triggering Albano to deck him. Well, that escalated quickly.

- Vote for the Best Single Vocal Performance on The Wrestling Album. You know all the nominees at this point. My vote is for Nikolai Volkoff.

We're wrapping up the in-ring action this week with a barn burner. Like the Bulldogs generic hometown, I love that Chung Lee is from "Korea." Who the heck is DR. MIDNIGHT, and I'm sure he's doing the job in this match. After all these years of white washing it out of existence, hearing "Don't Go Messing with a Country Boy" sounds weird now. We have a Hillbilly Hoedown to get the crowd going. We get a wide shot of Elmer's back. Jim starts, locking up and shoving Lombardi into the ropes. Lombardi's shoulder tackle doesn't budge Jim much. He tries it again and gets hip tossed. Jim plants him with a pair of slams and tags in Luke to combat Tiger Chung Lee. WOOF. McMahon insists the Hillbilly corner conference was them discussing their last possum dinner. Luke whacks Chung Lee with an axe-handle (double fist, not an actual axe handle). Elmer tags in to throw Midnight around. Whip to the corner and Elmer with the world's slowest avalanche. Jim back in with an elbow drop to finish at 2:23. Bruno: "It's midnight for Mr. Midnight." Hey, at least Bruno is having fun with this.

- BREAKING NEWS: Valentine and Beefcake face The British Bulldogs. NEXT WEEK. In a Non-Title Match, of course.

- Gene Okerlund hypes the February 8th card in Boston. Ricky Steamboat faces Mr. Fuji in a MARTIAL ARTS MATCH. Wait, that doesn't sound right. I'm sure this was changed to Steamboat vs. Muraco. Bruno Sammartino comes in and cuts a promo to hype the Cage Match with Piper, where Bob Orton Jr. is BANNED from ringside.

- Next Week: The British Bulldogs vs. Greg Valentine and Brutus Beefcake. Sammartino insists if the Bulldogs win, the Champions will be forced to defend the Tag Team Titles against them.

Final Thoughts: This turned from a perfectly acceptable show of squashes to a glimmer of excitement with an angle officially kicking off surrounding the Tag Team Championships, and oh yeah, WRESTLEMANIA 2 is coming. Wait, correction: WrestleMania 2 is WHAT THE WORLD IS COMING TO. Whatever that means (spoilers: I know, but for fun, we'll play along and wait for the WWF to announce things).