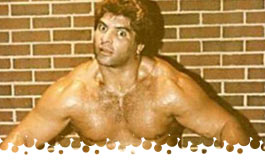 - Taped from the Mid-Hudson Civic Center in Poughkeepsie, NY on December 17th, 1984, with Vince McMahon and Bruno Sammartino calling the action, unless otherwise noted. You can see the pain in McMahon's eyes whenever he mutters the word "wrestling." We're promised more of the training of Hillbilly Jim, as well as seeing the Tonga Kid and the Super-Team of John Studd and Ken Patera in action. Again, I'm not doing a week-to-week recap of WWF television, I just happen to have access to a decent amount of stuff from this month.

The Tonga Kid vs. Mike Powers

The Tonga Kid would go on to become Tama of the Islanders, and I'm pretty sure is the youngest wrestler to ever headline a card at Madison Square Garden (19 years old), and less than 2-years into his professional career. Tonga Kid is credited as the Cousin of Jimmy Snuka. Powers tries to take it to Tonga, but that doesn't go well for him. Whip and an ugly back-drop. Tonga Kid comes off the ropes with a shoulder tackle and plants Powers with a slam. Sammartino is critical of the lame punching from Powers. Tonga no-sells, doing a break dance that his brother would be far more known for (that's Rikishi, by the way) years later. If you like headlocks, this is YOUR match. Tonga with a back breaker, and a flying headbutt finishes at 3:55. Tonga celebrates with more dancing.

- We see the same highlights from last week with Cyndi Lauper and Lou Albano from Studio 54, then NEW footage of them introducing the audience to WWF Champion, Hulk Hogan. Hogan jokingly makes fun of Albano's appearance and gives him credit for changing his ways. "I'm standing with the man in the mirror..." No, I don't care if that song wasn't written for a few more years.

Notice Valentine is without a manager. I'm sure that will change sooner than later. The crowd taunts the Hammer with chants of "Tito", so he shows off the IC Title to show them who the man is. Mirto starts off hot, and by hot, I mean he strung together two moves before getting his clock cleaned by Valentine. Valentine drops an elbow across the "lower abdominal area", followed by a knee across the chest. He hooks Mirto for a butterfly suplex but chooses to pound on him instead. Valentine with a standard suplex and the wind-up elbow drop before finishing with the Figure-Four at 2:20. Did Valentine break a sweat for that match?

- "Mean" Gene Okerlund is standing by for an interview with Mike Rotundo (taking on the Iron Sheik) and Barry Windham (taking on Nikolai Volkoff) hyping the card at the Boston Garden on February 2nd. Rotundo is SO vanilla of a babyface promo, he makes vanilla go "damn, is that what people think of me?" The headlining match is a Texas Tornado Tag between Andre and JYD against Studd and Patera.

- Hulk Hogan is standing by with Hillbilly Jim for more training. Jim is more willing to drink Hogan's protein beverage, and pops a pack of pills... what, you don't know of Hogan's Python Power?! They're in the gym, and Hogan is still frustrated with Jim always wearing his hat, but his technique when it comes to bench pressing and doing squats has improved dramatically. 20-years later, and we got equally charming montages with William Regal and Eugene. Hogan doesn't think he's ready to learn wrestling yet, but he thinks he's ready, showing off his bear-hug on some poor sap. I have no desire in watching "Hillbilly" Jim in action, but being associated with Hogan at this point is almost a guaranteed rocket push unless something catastrophic happens, like breaking your leg and watering down the gimmick, but what are the odds of that happening?

- "Mean" Gene Okerlund is back for more interviews to hype that card coming to the Boston Garden. Andre the Giant comes in let Okerlund know it was his idea to make his match at the Garden a Texas Tornado Tag. He calls out Studd for getting DQ'ed last time, but he'll keep getting in the ring with them because he'll never get tired of beating on them. Also, on the card, Wendi Richter defends the Women's Title against Judy Martin, and Ivan Putski takes on "Mr. Wonderful" Paul Orndorff.

How can a wrestler be sanctioned if he's neither listing a hometown or making weight? The name "U.S. Express" is still never mentioned. Vince calls them "The American Express" during their entrance. Reynolds surprises everyone by taking Windham over with an arm drag. Windham returns the favor, with much better technique. Windham with a monkey flip, sending Reynolds out of the ring. Rotundo plants X with a slam and drops the elbow for two. Windham with a whip and diving forearm for two. Rotundo with an airplane spin, knocking Reynolds silly in the process, and that's enough for a three count at 2:41. The crowd really digs Rotundo and Windham.

- "Rowdy" Roddy Piper is standing by from Piper's Pit with the Tag Team Champions, Dick Murdoch and Adrian Adonis. He was looking for the Briscos, but only found a cheap bottle of wine that they've been drinking from. He says it doesn't make sense how they beat the Champions. Murdoch sticks to the story they wrestled the match with the flu and wrestled against doctor's orders. Adonis now says it was the Taiwan flu, and the fever was 104 degrees. Adonis says there's other teams, like Frankie Williams and "Rivera" in line for title shots, so Jack and Jerry need to get in line.

Danbury, CT isn't a hometown you hear often. Lockup and they fight over a waist-lock. Kelly gains control, but Santana quickly counters with a head scissors. Crisscross and Santana with a hip toss, followed by a slam and deep arm drag into the arm-bar. Santana with a fireman's carry into a chin-lock. McMahon draws attention to the surgically repaired knee of Santana, courtesy of Greg Valentine. Kelly gets his token offense in. Santana fires away with right hands and starts to punish the leg, finishing with the Figure-Four at 2:51, sending a message to the Intercontinental Champion.

- The Magnificent Muraco and Mr. Fuji are hanging around Hawaii. Muraco says that Magnificence is a short time away to end the reign of Hulk Hogan.

I'm going to give the odds to the jobbers... via getting beat-up so bad, the referee DQ's their opponents. The crowd is all over the Heenan Family with jeers. Vince McMahon claims Patera is the first man to ever military press 500 pounds. I didn't think the boulder weighed that much. Patera throws Powers across the ring with a slam and drops an elbow. Studd with a jogging shoulder tackle, then a cheap shot to Marino for the hell of it. This match is the definition of methodical. Marino tags in, and immediately gets pounded on like the Cops answering a 9-1-1 call from a closed McDonalds. Studd continues to showcase his offense, this time jogging in with an elbow. Studd drops an elbow, but he pulls Elway up at two. Patera with another throwing slam, then Studd carelessly drops him across the top rope. Patera traps Montana in the Full Nelson, and that does it at 4:44. I don't think Studd even gave either scrub a punch.

- "Mean" Gene Okerlund is standing by to promote the card on February 2nd at the Boston Garden. Okerlund interviews Ladies Champion Wendi Richter, who is set to defend the title against Judy Martin. She says if she can whoop Moolah, she can handle Martin, too. Iron Sheik cuts the interview off, and all Okerlund has to say is "isn't she attractive?" Wow, welcome to 1985. Sheik is scheduled to break Mike Rotundo's back and make him humble.

- Vince McMahon talks about the award presentation from MSG... and again they can't show the footage. Maybe next week!

- THE INCREDIBLE Hulk Hogan will be making a Non-Title appearance next week! Brutus Beefcake, Blackjack Mulligan, and The Junkyard Dog will be here next week, too. (Spoilers: We won't actually see it, sorry)

Final Thoughts: Watching week to week, full episodes, isn't something I'd recommend. To be honest, I only watched this episode to see the further adventures of Hulk Hogan training "Hillbilly" Jim. Once again, we've touched base that the angles to look forward to are Valentine/Santana for the IC Title, Andre vs. The Heenan Family, and which babyface team will jockey for position to challenge Adrian Adonis and Dick Murdoch.