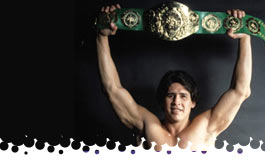 - Hosted by Vince McMahon and Bruno Sammartino, taped on December 17th, 1985 from the Mid-Hudson Civic Center in Poughkeepsie, NY. This week we'll see plenty of tag team action, with the thrown together teams of George "The Animal" Steele and Junkyard Dog, Tito Santana and Pedro Morales, and Ricky Steamboat and King Tonga. Championship Wrestling is STILL using the instrumental of Michael Jackson's "Thriller."

Sometimes the best part of recapping these old syndicated shows is how they'd throw some random teams together to give the fans "more bang for their buck", if you will. Steele doesn't waste time, throwing Spot out of the ring. Spot comically stops on the way down so soften the blow. PROTECT THE BUSINESS, SPOT! Meanwhile, JYD works the arm of Mr. Rizzo. The Dog gets caught in the wrong corner. Spot and Rizzo work him over with punches, despite Steele's multiple attempts at making a save. The referee can't bother to get anyone out of the ring. What am I watching, 1986 WWF or All Elite Wrestling? Rizzo sucks so bad he can't even take a bump through the ropes without looking awful. Steele in with biting. JYD with a snap mare and chin-lock applied to Rizzo. Wow, this match desperately needed a rest hold, didn't it? JYD casually hits a headbutt and that finally finishes things at 3:23. Post-match, Steele continues to fight with Spot, because why not. A plastic chair gets tossed around for the hell of it. JYD and Albano get Steele to start dancing, and that is probably the only highlight of this 5-minute segment. It's hard for a squash match to be awful, but this one proved such things are possible.

- Lord Alfred Hayes is standing by with this week's "Update." The Hawaiian Islands have produced many great superstars, but none as great as Ricky "The Dragon" Steamboat and Magnificent Muraco, who's rivalry has turned into A LIFE AND DEATH STRUGGLE. We see clips of Ricky Steamboat in action, and that's that. You know, I LOVED the Update segment that we associate more with Gene Okerlund, as it usually covered something with more meat than "oh, hey, these two guys still hate each other. Remember?"

Sexton seems to always have a new spelling for his last name, but he's wearing a sequined jacket and seems to be spoofing Michael Jackson, if you need to put a face to the name. The Poughkeepsie crowd chants "A$$hole" at Funk. McMahon calls attention to the fans but pretends he can't make out what they're saying. Uh-huh. Still using that excuse in 2019, too, huh? Sexton surprises Funk with a drop toe hold. Funk responds by clobbering him with rights and dumping him to the floor. Sexton doesn't take kindly to being assaulted by Jimmy Hart, leading to a race around the ring, with Funk trailing behind and eventually nailing the distracted Sexton with a forearm across the back of the head. Back inside, Funk continues to pound away and dumps Sexton out, again. Funk with a slam and some mock JYD-style headbutts. Sexton no-sells them and gets slapped. Whip and Funk hooks a sleeper for the victory at 3:00. Post-match, Sexton gets branded across the chest. There's to schools of thought: Sexton no-sold because Funk's headbutts weren't meant to hurt, because it's not his move, or because African Americans were immune to head blows back then. Either way, Funk made this entertaining.

- You can vote for the following personalities in Land of a Thousand Dances... Captain Lou Albano, Fred Blassie, Roddy Piper, and The Iron Sheik. Oh, and again, EVERYONE IS ELIGIBLE FOR VOTING.

Is it too insensitive to call Tito and Pedro the Mexi-Rican Connection? I can only imagine fans in 1985-86 complaining that Santana, as the Intercontinental Champion, spent much of his 2nd run with the belt doing nothing but meaningless tag team squashes. Justifiably so, considering there wasn't 19 championships to pass around like somas. Santana starts. Lombardi with a side headlock and shoulder tackle. Santana takes control with a hip toss and slam. Morales in to work the arm as McMahon notes Santana is recovering from a bruised groin. Whip to the corner and Morales with a back body-drop, followed by a slam. Navarro in to try his luck, including giving a clean break in the ropes. WUSS. He's not so sportsmanlike on the second try and pounds on Morales with rights. Morales throws Lombardi overhead to break a front face-lock. Santana lays into Navarro with rights and plants him with a slam. Whip to the ropes and Santana with a back body-drop. Figure-Four finishes at 2:58. Nothing much to see or talk about here, other than wasting Santana as the secondary Champion.

- "Mean" Gene continues to hype the card at the Boston Garden and interviews Bruno Sammartino and Paul Orndorff.

It seems like the WWF never could make up their mind on Cripley's name. Heenan insists on being called the Manager of the Year, despite losing to HILLBILLY JIM of all people. Cripley and Dose back Bundy into the corner, but they don't hold him there for long. Bundy rams their heads together (DOUBLE NOGGIN KNOCKER) and tosses Cripley out. Whip and an elbow lays Dose out. Bundy with another double noggin knocker. Bruno jokes that Dose and Cripley are the handicapped in this situation. Bundy piles the geeks onto each other and finishes with a splash at 1:58, and yes, he did demand a five-count. A decent showcase to put Bundy over as an unbeatable force.

- Piper's Pit, and a very special edition, too. Jimmy Hart comes on to the set with an unidentified bag of goodies and introduces us to "The New" Adrian Adonis. He comes out with his hair cover in bows and carrying his leather jacket. He says he's been rough, tough, and mean all his life, and he can wear whatever he wants. He feels so much like Adrian Adonis with that stuff in his hair, that he retires the leather jacket, and presents it to Piper. Adonis starts doing kicks and tells the Rockets to eat their hearts out as the segment ends. Quite the adjustment for Adonis' character, though his explanation makes sense. One of the long-told rumors in wrestling was that Piper kept the jacket and even kept wearing it years after Adonis' death in 1988. Even if it's not truthful, that's still a great attention to detail, and I'm sure the actual jacket was kept in his possession, if never actually worn on TV.

I don't expect to see much offense out of a goober named Joe Williams. As noted on last week's Update, Muraco is still feuding with Ricky Steamboat. McMahon buries Williams' physique (or lack of one) as Muraco quickly pummels him to the canvas. Muraco takes him over with a loose suplex and drops a knee across the face. McMahon suggests Williams is "green" and "inexperienced." Williams gets dumped out, where Fuji greets him with a knife-edge chop (and a recipe for dog lo mein). Back inside, Muraco jerks the head of Williams between his knees and comes off the top rope to drive Williams backwards onto the canvas. Spike Piledriver finishes at 2:38. Muraco's piledriver would gain a more memorable name as the "Tombstone" a few years later. Decent squash, and McMahon pooping on enhancement talent is always worth a laugh.

- Vote for the best singles performance on the Wrestling Album. It's the same names we've seen last week and will see for a few more weeks after this: The Junkyard Dog, Nikolai Volkoff, Hillbilly Jim, Jimmy Hart, Captain Lou Albano, Roddy Piper, and Gene Okerlund.

Oh, my God, I forgot this is an original recording, I almost crapped my pants hearing The Alan Parsons Project's "Sirius." Older fans will likely remember Tonga as "Haku" or "Meng", but here, he's a clean-cut babyface from the Islands. Tonga starts with Petruzzi. Tonga fights out of a hammerlock and nails Petruzzi coming off the ropes with a chop. Then he dances. Okay, babyface Haku just doesn't work for me. Lockup and Tonga works the arm. Steamboat comes off the ropes with a chop across the top of the head and picks up where Tonga left off. Petruzzi escapes with a slam, but he sells the arm, which allows Tonga to come in and further punish him. Tonga with a back suplex for two. Shaw tags in and is nailed with a double chop. Petruzzi tags back in, pounding on Steamboat with rights. Tonga nails Petruzzi with a short-clothesline and Steamboat comes off the top with a flying body press for three at 4:03. Shaw literally did 20-seconds in the ring.

Final Thoughts: We started the show off with a very rough squash match, but the rest was entertaining stuff, including a memorable Piper's Pit where Adrian Adonis officially begins his transformation into being "Adorable", as well as entertaining squash matches from Terry Funk, The Magnificent Muraco, and King Kong Bundy