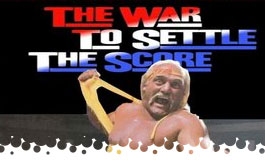 - I've mentioned in other recaps for this era that I wouldn't be covering the MSG card that hosted this event, but thanks to the power of the internet, we can get to enjoy the special that aired on MTV.

- Presented on the MTV Network and hosted by "Mean" Gene Okerlund and Alan Hunter. This has, according to Hunter, "social, political, and artistic implications." Okerlund says Roddy Piper has gone beyond criticizing a form of music and before he could finish, Hunter cuts in to say he hit a woman (that would be when he brushed Lauper aside at the show held at MSG on December 28th, 1984). Okerlund says it started as "The Brawl to Settle it All" between Cyndi Lauper and Captain Lou Albano. We get highlights of the promos from Albano and Lauper that were featured prominently on Piper's Pit. Lauper chose Wendi Richter as her representative, and Albano chose Ladies Champion, The Fabulous Moolah. The result was Richter taking the Championship home, ending Moolah's 27 YEAR REIGN AS CHAMPION.

- We cover Lou Albano's change of heart, which is blamed on a type of brain damage. Albano joined Lauper in raising money for multiple-sclerosis, and on December 28th, they were presented with several awards from Dick Clark. Roddy Piper interrupted the ceremony, smashing Albano over the head with the framed record, kicking Lauper to the canvas, then slamming David Wolff. The act was so heinous it took WEEKS to get clearance for footage to be seen on syndicated WWF television.

- Gene Okerlund describes the scene as a nightmare as David Wolff is being tended to by a physician. Wendi Richter calls Piper immature and jealous over his actions. We get a bunch of quick soundbites from Lauper's mother, Wolff, and Albano wanting Piper's blood. Even Dick Clark is expecting Piper to "get his." Bobby Heenan thinks otherwise. He said Piper did a great number and he condones his behavior. Orndorff says Piper stood up for everything he believed in, and Lauper deserved to get stomped on. Dr. D says Albano got what his fat butt deserved, and Lauper should be at home cooking in the kitchen. Piper doesn't care who you are, if you slap him, he'll knock you out.

- MORE SOUNDBITES! Gloria Steinem is ANGRY about Roddy Piper and he's not fit to wear a skirt. Jimmy Snuka thinks Piper has no class. Bruno Sammartino says he has no respect for the business. Ted Nugent says something, and he doesn't matter. Dee Snider says rock ‘n' roll will get him.

- We finally get Hulk Hogan's promo, with "Eye of the Tiger" blaring in the background. He's heard Piper say over and over "you have to pay the piper", and he hopes to be the Marshall Dillon of the Rock ‘n' Wrestling Connection and wants Piper to feel his wrath.

- Roddy Piper accepts Hulk Hogan's challenge, but only if the WWF Championship is on the line. On the set of Piper's Pit, Piper tells Hogan to send him his girlfriend at the same time he hands the belt over to him. Hogan signs the contract and throws it in Piper's face.

- Piper cuts a promo on MTV. We get soundbites from the likes of Andy Taylor (from Duran Duran) and Kenny Loggins making fun of Piper for wearing a skirt. All the heels side with Piper, of course. Blassie demands the Russian National Anthem be played on MTV. Rock ‘n' Roll doesn't exist where Nikolai Volkoff comes from, then sings… I think you know what. Once again, Hogan's promo is accompanied by EYE OF THE F'N TIGER, even if it lasts only 8-seconds. Seriously, there's so many jump-cuts from one talking head to another, it's giving me a headache.

- In one of the goofiest segments, a bunch of stuffy critics over-analyze rock music and wrestling before being interrupted by "Handsome Dick Manitoba: The 1st Singer to Discover the Rock and Wrestling Connection." That's so stupid it made me laugh.

- We recap some of Piper's prior antics, like smashing a coconut over the head of Jimmy Snuka and beating the piss out of Frankie Williams for standing up for himself. "That's great, you got no room for nobody, but you're a lousy wrestler." Is it weird I didn't notice his "Superman" shirt during that Williams segment until just now?

- More Eye of the Tiger and clips of Hogan as "Thunderlips" in Rocky III. On January 23rd, 1984, Hogan broke the Iron Sheik's dreaded camel clutch and brought the WWF Championship back to America.

Gorilla Monsoon and "Mean" Gene Okerlund are calling the action. Bob Costas is here to do the ring introductions. Piper smashes a guitar to tick off the fans and gets pelted with trash. I didn't think it could happen but hearing Eye of the Tiger 10-times in half an hour makes me sick of the song. Mr. T is front row to support the Hulkster. They get into a slugfest before the bell and roll back and forth for position on the canvas. Whip to the corner and Hogan follows in with a big elbow. Hogan with a pair of slams and a crushing elbow drop. Piper reverses a whip to the corner and charges in with a clothesline for a two-count. Piper with boots to the face of the Champion, followed by a double chop to the throat. Gene Okerlund is more interested in telling us that Joe Piscopo and Danny DeVito are in the crowd. Whip and Piper hops on Hogan's back with a sleeper. Monsoon and Gene claim it's a choke as Hogan arm drops twice. The finger wags on the third drop and he fights to his feet, carrying Piper on his back and ramming him face-first into the turnbuckle. Piper recovers first, clobbering Hogan with an axe-handle. Orton gets a cheap-shot in, but Hogan fights free and smashes the injured arm of Ace into the turnbuckle support bar. Hogan with a rake of the eyes, Piper with a rake of the eyes. They go back and forth until Hogan hits him with the running clothesline (AXE-BOMBER!). Suddenly, Paul Orndorff shows up at ringside to support Piper. Piper blocks an atomic drop, and in the process, bumps the referee. Orndorff climbs the ropes and hits Hogan with a flying knee drop. It's a blatant 2-on-1 now. Lauper hops on the apron, but she's of no help. Orndorff and Piper tease going after her, but MR. T HOPS THE RAIL TO SAVE. Piper challenges T to get in the ring now and the crowd is RABID. Orndorff with a distraction, giving Piper the opening for a cheap shot. It's HULK-UP TIME! We've got even sides, 2-on-2, and Piper and Orndorff decide to bail out before they can get their comeuppance. Once they find the courage to attack, with Orton at their side, a group of agents, prelim wrestlers and police officers make sure we don't get a conclusion. Call it a Sports Entertainment Finish at 7:30, by the way. This was all action and a hot crowd with the necessary wild finish to build towards you-know-what. For the entire spectacle, call it ***1/2.

- Gene Okerlund is in the locker room for comments. Alan Hunter says it's hard to have impressions over the confusion but "Rock n' Roll came out well in the end." HOT F'N TAKE, ALAN. Gene says this was supposed to be the War to Settle the Score, but nothing was settled at all. HOT TAKE, GENE.

Hogan comes in and says he doesn't mind fighting for his life. He saw the devil in Piper's eyes and he's only interested in destroying the Rock n' Wrestling Connection. It doesn't matter what he has to do, Hogan wants to put an end to this pack of rats, and he's willing to die for rock ‘n' roll and the WWF Title.

David Wolff and Cyndi Lauper are next. Wolff says this is what happens when everyone sticks together. Lauper says she won't stand for the actions that took place and calls Orton half-a-man with half-an-arm. She doesn't care what anyone does to her, she stands up for her friends.

Mr. T was here to see a good match, but he doesn't respect a chump or sissy trying to hit a lady. Hogan says he sees the Eye of the Tiger in Mr. T and he loves him like a brother. T says any time Hulk needs him, he'll be there to have his back.

The parade of interviews continues with ANDY WARHOL. He has nothing to say. Literally. Gene Okerlund does all the talking for him and proves his ability to hold segments together. JOE PISCOPO is excited to have Hogan's sweat drip on him and compares the show to a Bruce Springsteen concert. BILLY SQUIRE doesn't respect them smashing the guitar before the match. Hitting a woman? Whatever, but SMASHING A GUITAR?! SHAMELESS BEHAVIOR! Danny DeVito is happy to be here and inspired for a wrestling career of his own as The Trash Man. Roddy Piper interrupts and says if Hogan doesn't have the guts to fight him 1-on-1, then leave the title with him. The fans didn't see Hogan pin him, all they saw was a piece of crap. Piper offers to fight the woman, the little black man, and the blonde guy all by himself.

Final Thoughts: The best way to describe this is a precursor to WrestleMania, with the emphasis on celebrity involvement blended together with the hottest angle the company had going for itself. I'm not going to pretend this should've had a clean finish, because that wasn't the point of the story. This was to launch the company into high-gear for WrestleMania at the end of March, formally bringing Mr. T into the mix along with Hulk to combat the trio of Piper, Orndorff, and Orton.