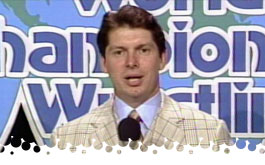 - I don't plan on recapping many of the weekly television programs produced by the World Wrestling Federation from this time, but this episode is one that certainly stands out and is worth giving at least one look, and yes, this is the first time I'm watching what has become known as "Black Saturday", when Vince McMahon bought out Georgia Championship Wrestling from under the nose of Ole Anderson (through backdoor dealing with the Brisco Brothers, Jack and Jerry) and immediately replaced their content on WTBS with second-rate left-overs that infuriated the regular viewers. There seems to be a myth surrounding the whole deal, suggesting that the WWF content tanked in ratings and was immediately replaced, but WWF's "Georgia Championship Wrestling" actually ran through March of 1985, or about 9 months. Ted Turner devalued the timeslot by adding wrestling to the regular lineup on Saturday morning and Sunday evening, and eventually Vince McMahon sold the time slot to Jim Crockett. I know the whole situation probably deserves more than a paragraph worth of explanation, but honestly, there's not much more to say without sounding repetitive.

- Freddie Miller welcomes us to the WORLD WRESTLING FEDERATION'S World Championship Wrestling, and welcomes Vince McMahon to offer us a lineup of what to expect on the following programming.

Taped on July 10th from Brantford, Ontario for their Maple Leaf Wrestling program. Murdoch and Adonis are the NEW WWF Tag Team Champions, having defeated Tony Atlas and Rocky Johnson on the May 26th episode of Championship Wrestling, but taped way back on April 17th. Did they ever give Murdoch and Adonis a lame name like the "East-South Connection?" Murdoch and Jones start. Lockup to the corner and the referee forces a break. Jones with a side headlock. Adonis with a series of maneuvers, but Jones counters with a wrist-lock. Crisscross sequence and Jones with a slam. Adonis over-sells a headbutt and tags back out. Jones avoids a cheap shot in the corner and drops Murdoch with a headbutt. DeCarlo tags in to work on the arm of Adonis. Murdoch in and he falls into the same trap. Murdoch with rights and the Champs with a double elbow drop. Adonis with an abdominal stretch, but Jones comes in to break it up with a headbutt. DeCarlo fends off Murdoch and hot tag to Jones. He whips Murdoch into Adonis and connects with more head-butts. Adonis from behind with a knee to the back. Whip to the ropes and a double elbow. DeCarlo tags in to do the job... sorry, spoiler alert. He meets an elbow on a charge to the corner. Murdoch lifts him in the air and Adonis from the top with a clothesline for three at 6:12. The crowd was surprisingly hot for Jones, but there wasn't much to this.

- "Mean" Gene Okerlund interviews Mr. Fuji and his newest protégé, George "The Animal" Steele. I guess Fuji has retired from full-time in-ring competition since we last saw him on a Madison Square Garden broadcast. Of all the people to feature an interview with, you choose FUJI and GEORGE STEELE? This show is deliberately tanking.

Taped on June 17th from the Met Center in Minneapolis, MN, a general TV taping with stuff featured on all sorts of different programming. I'm sure putting on shows in Minnesota made Vern Gagne happy. Ventura's attire is the subject of conversation between Gorilla Monsoon and Gene Okerlund. I'm not sure, but the referee looks like a young Joey Marella (adopted son of Gorilla Monsoon). If you didn't expect it, we get some stalling after the bell. Lockup into the ropes and Ventura doesn't even tease a clean break, clubbing Curtis across the chest and throwing him into the corner. Ventura rakes the eyes with the laces of his boot. Ventura with a slam, but a leg drop missed. Curtis with a short offensive burst before running into a knee in the corner. Ventura pounds away on the back and decides to go to work on the arm. He flips again, targeting the back, and the over-head back breaker gets the submission at 4:19. Standard squash match. I'm not a fan of Ventura's in-ring work, so this being short was the only thing I was hoping for.

- "Mean" Gene Okerlund with another recycled interview, this time with B. Brian Blair, Mr. Personality himself. If only he thought up the term Mr. Electricity before Herb Abrams, he might've gotten beyond the prelims as a solo performer in the WWF. An absolutely DULL promo from what appears to be Blair coming out of sedation. BUT WAIT. The segment isn't over. Now ALEXIS F*CKING SMIRNOFF GETS PROMO TIME. Again, this show is being tanked intentionally. Nobody could feature this much crap without trying.

From the same TV taping as the opening match with Dick Murdoch and Adrian Adonis. Sheik has been headlining shows with Sgt. Slaughter for most of the Spring in some of the better matches the WWF was offering, but he's still not someone that fans of Georgia Championship Wrestling are going to enjoy. Hutchinson looks like a pale Richard Simmons without the lift in his afro. Even the Canadians don't like the Iron Sheik. Lockup and Sheik with a fireman's carry takedown. He sends Hutchinson to the corner and takes him over with a back drop. Sheik with a stomach buster after holding him up in the air for an extended period of time. Crowd chants "We Want Slaughter" as Sheik continues to put the boots to his opponent. Sheik with a twisting back suplex and the Camel Clutch finishes at 2:09. Very economic squash for the Sheik, who wasn't bad in the ring, just an annoying foreign menace in a sea of them under the WWF banner.

From the July 7th card held at the Philadelphia Spectrum. Seriously. Big John Studd vs. BOBO BRAZIL is the featured match this week. McMahon hypes this as a comeback, but this is actually Brazil's last in-ring appearance for the WWF, three-days shy of his 60th birthday! I have no hope for this being anything but terrible. Studd takes exception to Mel Phillips understating his height and weight. Lockup into the corner, Brazil blocks a right and unloads with some pathetic blows. There's working light and then there's what Bobo Brazil is doing. Whip to the ropes and Studd with an elbow. He goes to the bear-hug, since there's nothing much else for him to do. Studd's claims of 7'0" (or even 6'10") are kind of thrown out the door when he's SHORTER than Brazil, who's listed at 6'6". Bobo turns it around and they trade eye rakes. Studd stalls on the floor, to my delight. Saves me from having to watch more bad punches and head-butts. Back inside (boo) and Studd chokes. Whip to the ropes and Bobo stops on a dime before Studd gently blows him over with an alleged shoulder tackle. Bobo with another comeback. Whip to the corner and Bobo telegraphs a counter by about a week and a half. He dances around and lands a headbutt, but misses a leg drop. Studd with an elbow drop for three at 5:47. Atrocious. On the positive side, I'm sure almost anyone who started watching the show had already turned it off before this abortion made it to broadcast.

Final Thoughts: This was one sad excuse for an hour of wrestling programming. Did someone seriously think taking over a popular time slot and replacing it with garbage like Bobo Brazil vs. John Studd, interviews with George Steele and Alexis Smirnoff, and recycled, second-rate squash matches was going to be enticing enough for viewers to keep interest after shockingly discovering their beloved program was replaced? There's the curiosity factor here, but even that isn't enough to recommend viewing this turd. One of the least enjoyable episodes of any WWF programming I've ever witnessed.