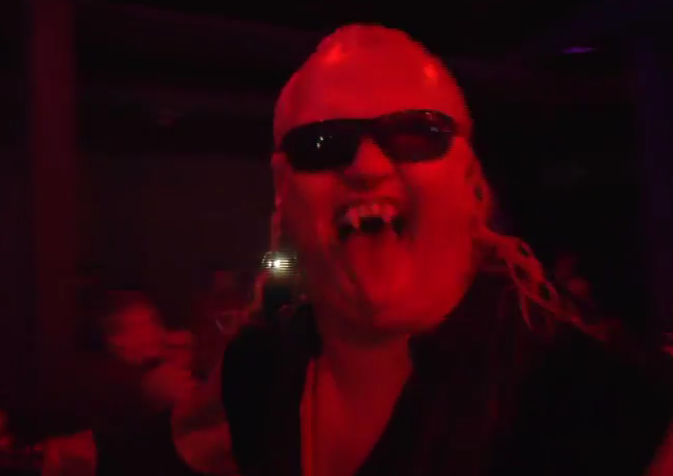 Happy Halloween Havok! The pandemic isn't over, but we're all getting ready to Trick or Treat like it's 2019. Pop open a Sam Adams Jack-O beer and settle down with (maybe) the best of Gangrel's late WWF career and adventures in the North American independents, where his status of "Everyone's Favorite Vampire" is challenged by the nefarious Kevin Thorn.

Gangrel (with The Hardy Boyz) vs. The Inferno Kid

WWF Metal - October 9th 1999
The WWF has offered up a jobber to Gangrel as a friendly Halloween present. Gangrel shakes off some token offense and nails a double underhook suplex. Inferno Kid scores a sunset flip for 2, so Gangrel angrily finishes with the Impaler DDT at 1:48. The Hardy Boyz pick up the scraps while Gangrel considers having an early dinner. Basic squash, and a rare win for our favorite vampire. 0 for 1.
Winner: Gangrel

We jump ahead to the December 26th 1999 episode of Sunday Night Heat, where we find Luna Vachon mixing it up with the Godfather's ladies. She's inappropriately fixating on their jewelry and looks, so the Godfather might be regretting his decision to welcome Luna to the Ho Train. 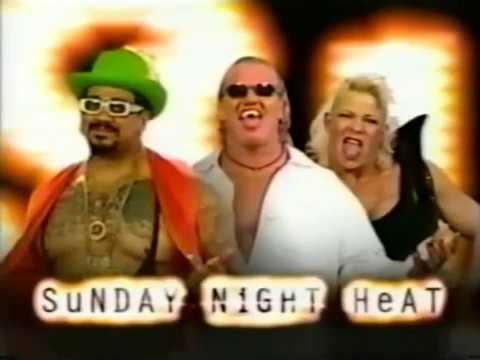 The Godfather (with the Ho's) vs. Gangrel

WWF Sunday Night Heat - December 26th 1999
Godfather has no ho's for Gangrel and introduces Luna as his newest employee. This sends Gangrel into a rage and he takes it to Godfather early. Godfather comes right back with a power slam. Scoop slam by Godfather, but Gangrel blocks a Vader Bomb. Luna joins the other ladies to cheer for the Godfather, and they flinch while Gangrel stomps him down in front of them. Godfather hits a scary reverse suplex into the ropes. Godfather gets away with a spin heel kick into the groin, but Luna sprays blood into his face! Gangrel delivers the Impaler to win at 3:38! Luna and Gangrel reunite for a Boxing Day miracle! The match itself was pretty rough, and was surrounded by a totally cringeworthy angle, *. 0 for 2.
Winner: Gangrel

Gangrel (with Luna Vachon) vs. Test

WWF Smackdown - January 13th 2000
Test hits a quick shoulder block and pummels Gangrel. Irish whip, but Test runs into Gangrel's boots, and eats a suplex. Gangrel dumps Test to ringside for some cheap shots from Luna. Body slam by Gangrel, and then a pair of elbow drops for 2. Test pops up for the big boot and pump handle slam. Test stops to chase Luna from the apron, and Gangrel nearly steals it via small package. Gangrel's rope assisted cover fails and Test hits a full nelson slam, but Luna pulls out the ref. Test slams Gangrel again and gives Luna a spanking. The ref finally calls for the bell at 2:40. Test slams Luna and Gangrel again for good measure, and then finishes with a flying elbow. Match was total car crash TV, ½*. 0 for 3.
Winner via DQ: Test

WWF Sunday Night Heat - May 28th 2000
You have to wonder if Rikishi will attempt a stinkface, considering his opponent has fangs. Gangrel assaults Rikishi before the bell, and hits a flurry of aggressive ground and pound attacks. Rikishi shoves Gangrel out of the corner and comes back with punches and a running corner splash. Gangrel does indeed end up taking a stinkface. The Rikishi driver finishes at 2:17. Good short match, Gangrel looked downright wild on offense, but couldn't overcome Rikishi's crowd pleasing bag of tricks, *. 0 for 4.
Winner: Rikishi

WWF Jakked - June 24th 2000
Christian finally gets an opportunity against his former mentor, albeit on the F show. Gangrel is still mad about how things ended with the Brood and pummels Christian and hits a scoop slam. Christian blocks the Impaler , but the Unprettier gets blocked. High back body drop by Gangrel and then some aggressive elbow drops. Christian snaps Gangrel's neck on the ropes and lands a springboard crossbody to ringside! Backbreaker by Christian gets 2, so he applies a chinlock. Gangrel escapes, so Christian hits a reverse neckbreaker for 2. Gangrel answers with a belly to belly suplex, and then hits a powerslam for 2. Gangrel sends Christian into the buckles, but the Impaler gets blocked, and Christian gets the pinfall with his feet on the ropes at 4:35! Energetic short match that was probably too good for this particular show, **. 1 for 5.
Winner: Christian

"Battle of the Vampires": Kevin Thorn vs. Gangrel

OSCW 10th Anniversary Show - March 13th 2016
Both guys enter to their WWE theme songs, which you can get away with in smaller feds. Thorn politely wipes blood from Gangrel's face, but then sticks the cloth into his own mouth. This ends Gangrel's jovial mood, but he cheers himself up by getting the fans to sing "We Will Rock You" by stomping his foot. Thorn stalls for a short lifetime, playing off of the rowdy fans. When Thorn is finally ready to fight, Gangrel starts stalling, and gives out high fives. They finally lock up at the 4 minute mark, and Thorn corners Gangrel for some easy shots. Gangrel goes for the throat, but Thorn punches him away. Thorn misses a falling closed fist, and needs a timeout. Thorn drags Gangrel to ringside and takes control with a clothesline. Thorn's beatdown is basic and slow, even Baron Corbin would find it to be boring. There's "making every move count" and then there's "doing basic stuff because that's all you know" and I'll let you guess which category this falls into. The fans get behind Gangrel as he escapes a chinlock and mounts an aggressive comeback. Russian leg sweep by Gangrel gets 2. Thorn loses his temper, sprays Gangrel in the eyes, and grabs a chair, but the ref won't let him use it. A blind Gangrel puts the ref down with a DDT. When all hope looks lost, a skinny guy runs in for a save, Thorn tosses him. Gangrel and Thorn duke it out as a new ref calls for the double disqualification at 13:43. This was rough, there is no reason for anyone to watch this, DUD. 1 for 6.
No Contest

Thorn and Gangrel go through a standard pull apart brawl, and I guess this feud must continue.

VCW Quarantine at 6:15 - February 3rd 2018
Gunn earns a "Smoking Gunns" chant by pointing out a young fan cosplaying as him circa 1994. He asks all the parents to cover their kids ears so he can say "S*ck it." They're probably getting paid by the minute, because they don't lock up until 2:30 is gone. They get a clean break and Gunn considers taking his @ss out. Shoulder block by Gangrel, but Gunn leap frogs into position for the uppercut. Gunn cuts Gangrel down with superkicks. Irish whip by Gunn and then a back body drop sends Gangrel fleeing to ringside. They sleep walk through a standing brawl, and you'd be shocked at just how many people are in attendance, as the cameras catch full upper seating in the Masonic Temple. Gangrel hits the gentlest clothesline ever onto the ramp and rakes the back to take control. Gunn makes a comeback, misses the Fame-asser, but saves face with a modified clothesline. A local guy makes a failed run in, and Gunn hits the Fame-asser to win at 14:03. Total snoozer. I understand that they're slumming here and don't want to get hurt, but that doesn't mean it's fun to watch or that we should pretend it's worth watching, *. 1 for 7.
Winner and still VCW Heavyweight Champion: Billy Gunn 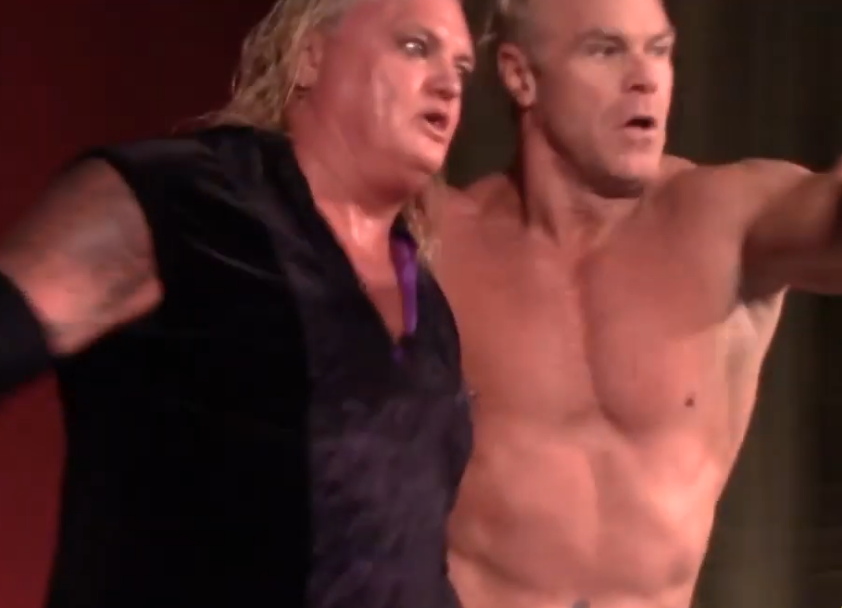 HOW: Heavy Halloween - October 29th 2017
Thorn stalls for time before the bell and seems to consider biting a mouthy young fan in the front row. They spend about two minutes pacing around before locking up. Thorn corners Gangrel for some easy shots. Scoop slam by Thorn, but Gangrel answers with an elbow drop. They head to the floor, where Gangrel smashes Thorn into a conveniently placed casket. Thorn fetches a plastic Jack-o-lantern display, but Gangrel bounces it off his skull. Thorn reverses an Irish whip into the concrete wall and they disappear into the unlit crowd. They brawl into a bathroom, the camera doesn't follow, so there's several seconds of dead time with fans just waiting around. They burst out, and Thorn has toilet paper hanging from his fangs. Thorn kicks the bottom rope into Gangrel's joy department, and presses a crucifix charm into Gangrel's face, which is sold like a burning iron. Kudos to Gangrel for living the gimmick. Thorn then chokes with his tie, which I'm sure hurts too. Thorn smashes open a skull jar and tries to cut Gangrel open with a jagged edge. Gangrel blocks and looks for a DDT, but Thorn shoves him into the referee. Thorn puts on some shades and takes a swig of fake blood. Gangrel hits a low blow, causing Thorn to spit up blood all over himself. The ref wakes up, sees Thorn covered in red goo, and calls for the bell at 12:37. That's an appropriately crappy finish for this kind of match. This needed to be about 25% more silly, if they weren't going to go for an epic brawl, *. 1 for 8.
Winner: Gangrel 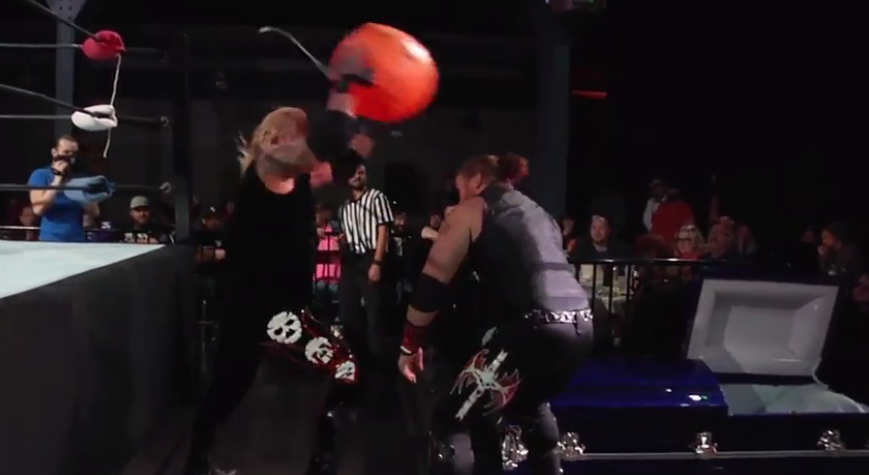 An irate Thorn attacks the ref, so Gangrel puts him down with the Even Flow DDT.

The Carver (with Copperhead) vs. Gangrel

Timebomb Pro Wrestling - July 29th 2021
The Carver is rocking a Leatherface gimmick, complete with an apron covered with human faces. The venue appears to be a log cabin church, so the image of Gangrel spraying blood is totally surreal. Gangrel hits a quick DDT, but Carver shakes it off and hits standard punchy, kicky offense. Gangrel answers with a Russian leg sweep, forcing Carver to flee the ring. Carver gains control of the brawl on the floor. Gangrel comes back with a baseball slide dropkick, but Carver kicks the ropes into his groin. Carver steals the Impaler DDT, but Gangrel totally no sells. Gangrel dispatches Copperhead with a back body drop, and Carver hits Gangrel in the head with an axe to win at 3:54. Good enough for WWF Metal, pretty silly by 2021's standards, ½*. 1 for 9.
Winner: The Carver 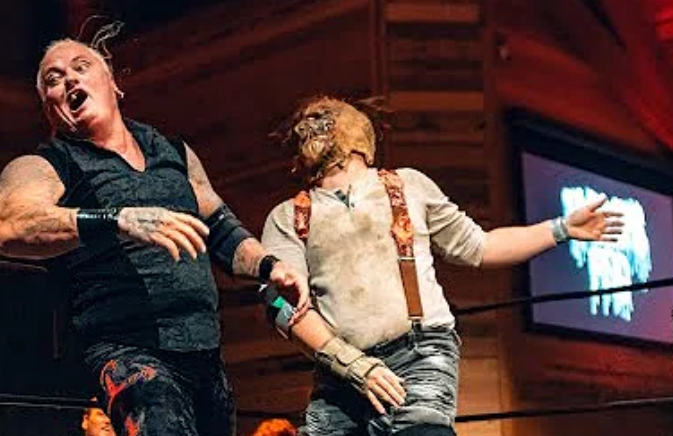 Final Thoughts: There's not enough Sam Adams Jack-O beer in 7/11 to make these matches interesting or entertaining. This collection belongs in the Trick heap. Still, everything covered is readily available on Youtube if you want to give this a second opinion.