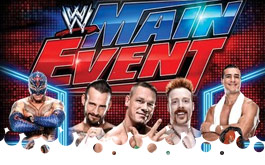 - I always love it when wrestling companies introduce a new television show. Despite the fact it'll no doubt end up hosting matches on par with what's typically on Superstars, the first episode(s) tend to have a bit more star power to attract attention. Hell, I guess this is going to be just like Superstars, expect televised for the American audience. I don't have the actual data, but I'm pretty sure Superstars only airs in International markets. Speaking of International markets, damn you people for getting Vintage Collection, too.

- Taped on October 1st, 2012, from Tulsa, OK. Michael Cole and reigning Intercontinental Champion The Miz are calling the action, unless otherwise noted. So WWE wants Cole to be more of a babyface now, yet they team him up with his heel man-crush? This company makes a lot of sense. I should also question airing this on the ion Network, home of a bunch of re-runs of Criminal Minds, and not much else since the Tampa Bay Rays television contract is exclusively owned now by FS Florida/Sun-Sports.

- Cole and Miz welcome us from the middle of the ring, hype the main event, and throw it to a video package of C.M. Punk, which seems to be pulled from hhis upcoming DVD set, Best In The World, available either now or very, very, soon. I'm sure I'll end up picking up a copy. We cut to the locker room, where Matt Striker gets a word from Punk, reigning champion for 318 days, you know. He's going to win tonight because he's the best in the world. Then we throw it to Josh Mathews, who is with Sheamus, reigning World Heavyweight Champion. Time for another video package, but I don't remember there being a Sheamus DVD, so who knows where this is pulled from.

Have to say it's a pretty smart move to do all those videos and interivews leading into the actual match, instead of waiting around for another 30-minutes. Michael Cole reminds everyone that the main event ISN'T the last match to go on. Even though neither title is on the line, you have to expect a bullshit finish, especially since Punk already did a clean job on Raw this week. Lockup to the ropes, and we get a clean(ish) break. Punk grabs a headlock, but Sheamus powers out with a hammerlock, then takes Punk over with a headlock of his own. We hype Miz vs. Sheamus on Smackdown while he rocks the hold. Whip to the ropes, and Sheamus with a shoulder tackle for two. He brings Punk back down with the headlock, then comes off the ropes with another shoulder. Criss-cross sequence, and Punk connects with a jumping heel kick. Punk with a pair of knees into the midsection, followed by some stomping in the corner. Punk charges in and meets the boot. Sheamus flips himself up to the top rope, but Punk pushes him off, into the security rail.

We return from a commercial break, with Punk pounding away across the chest of Sheamus on the apron. Sheamus turns the tide, hanging Punk up across the top rope. He throws Punk back into the corner, and unloads with rights and stomps. Punk grabs the tights to throw Sheamus into the buckle to kill any built momentum he had going. Punk with a snapmare and kick to the back. He comes off the ropes and drops a knee across the chest. Punk hooks the arm, and throws him shoulder-first into the buckle. Sheamus offers a comeback, but Punk kills it again with a basement dropkick. Punk with a neck breaker for a two count. Punk hooks a rear chinlock, and while we break the action, I have to say Cole and Miz are a fantastic team... as long as they're playing it straight. Sheamus escapes and runs through Punk with a pair of axehandles. He comes off the ropes with a knee lift, then plants Punk with a running powerslam for a two count. Sheamus tries to club Punk across the chest, but Punk counters with a roundhouse kick for two.

Back from break #2, with Sheamus laying around clutching his arm on the arena floor. Punk goes for a suicide dive, but Sheamus meets him in the ropes with a forearm. Sheamus with a slingshot shoulder tackle back into the ring for a two count. Sheams sets up for the Brogue Kick, but Punk does a 180 and hides in the ropes. Sheamus pulls him out, and Punk removes a turnbuckle pad in the process. Sheamus clubs Punk across the chest with ten forearms, then connects with White Noise for two. Sheamus with knees across the back, but a Clover-Leaf attempt is blocked. Punk charges into the corner with a running knee, then connects with a short-arm clothesline. Punk to the top rope, and the Macho Man elbow gets two. Punk signals for the GTS, but Sheamus hooks the leg and slaps on the Clover-Leaf! Punk finds something deep down to crawl to the ropes to force the break. Punk eyes the exposed turnbuckle (dum dum dum!), then drives a pair of headbutts to the midsection of Sheamus. Punk dives into the corner, but Sheamus counters with a back breaker. He goes for the Brogue Kick, but Punk drop toe holds him into the exposed buckle, and a victory roll gets the three count at 12:06. Had a handful of tights, too, I think. For free television, you can't ask for much. With commercial breaks, the match went 20-minutes, with another ten devoted to hyping both participants. Not the cleanest finish, but i was more than expecting a DQ or something along those lines. Post-match, Matt Striker tries to get a word from Sheamus, and guess what... he doesn't have respect for C.M. Punk. OOOH!

- Josh Mathews is backstage with Heyman and Punk to continue hammering home the point that Punk wants respect, but he needs to face John Cena... again... to get it. How many times as Punk beaten Cena, three times? I'm sorry, but Punk cheating to win a match is one thing to argue against giving him respect, but not giving Cena another shot when he clearly doesn't deserve it? That's garbage.

- Next week on WWE Main Event: Randy Orton vs. The Big Show. That's like Action Zone giving us Bret vs. Owen, HBK/Diesel vs. Razor/1-2-3 Kid, and the next week Mabel/Yokozuna.

First Round match in the #1 Contender's Tournament to, you guessed it, the Tag Team Champions. That goof Ryder actually has one of Marella's Cobra's on. They cut an insert promo, and wow, two of the most annoying goobers in the WWE on one team. Marella is OK in small doses, but I just don't like Ryder. There's almost no time left. Miz references John Morrison refering to his first Championship in WWE. Marella and Gabriel shake hands, then fight over a waist lock. Gabriel with a side headlock, followed by a shoulder tackle. Criss-cross sequence, and Marella's poor excuse at a leg sweep leads into both men tagging out. Kidd with a headlock, and a criss-cross sequence ends with a one-man flap jack from Ryder for two. Kidd with a drop toe hold and kick to the chest for two. Gabriel and Kidd with more double teaming for a near fall, and Kidd quickly hooks a front facelock. Gabriel with a sunset flip for two. Ryder counters a suplex, but a roll up is unsuccessful. Marella and Gabriel spill to the floor, and Kidd rolls up Ryder for two. Whip to the corner, and Ryder catches Kidd coming with knees to the face. Ryder with the Broski Boot, then a somersault plancha to Gabriel. Marella tags in, and the Cobra strike finishes Kidd off for the three count at 4:05. Feh. Didn't care for it too much, and I seriously doubt Marella and Ryder will advance past Cody Rhodes & Damien Sandow in the Semi-Finals.

Final Thoughts: I'd have to say this was a pretty good show, fueled by a very strong main event between Punk and Sheamus. As already mentioned, devoting roughly half of the run time to hyping both participants and giving them plenty of time to work (for free TV) is something that should be used better on Monday Night Raw. There's absolutely nothing wrong with filling 10-minutes on a 3-hour show hyping participants and a scheduled match. The show kind of came to a crawling end with a little too much in pushing the "Punk demands respect" envelope and a lackluster tag match, but overall, solid. Give Punk/Sheamus a look, and if you get Ion, 60-minutes is a lot more managable than 3-hours.