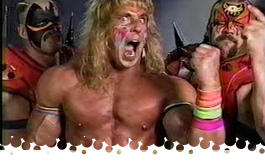 - The WWF finally returns to MSG after a near five-month gap between shows, and only managed to sell slightly more than half the tickets available. Ouch. Gorilla Monsoon and Bobby Heenan will be calling all the action, unless otherwise noted.

The MSG debut of Dustin Rhodes, back when he was a green rookie and all he had going for him was his last name. Rhodes quickly goes to work on the arm. Diamond with a "nice leverage move", but Dustin hangs on. Whip to the corner, Diamond misses a charge, and Dustin keeps working the arm. Rhodes comes off the ropes with a shoulder tackle, followed by a dropkick. Diamond with a slam but misses an elbow. Heenan says he can see Dustin as a "Midnight Cowboy". Diamond blocks a hip toss and grabs Dustin by the throat to slam him to the canvas. Rhodes reverses a whip to the corner and hooks another arm-bar. Crisscross and Diamond with a knee to the midsection, followed by a pair of elbows for two. Heenan gets on Diamond's case for lollygagging. Dustin fights out of a chin-lock but misses an elbow drop. Diamond responds, missing his own elbow. Rhodes goes for a clothesline but meets an elbow in the corner and Diamond goes back to the chin-lock. Rhodes escapes, but they blow a spot in spectacular fashion (they seemed cross on who was doing a leapfrog). They repeat the spot without a smooth transition. Rhodes with rights, but that corner turnbuckle isn't his friend. Diamond with a roll up, but the referee sees his feet on the ropes. Diamond meets the post on a charge. Whip to the corner and a clothesline, followed by mounted punches for two. Whip to the ropes, Dustin ducks a clothesline, hits a diving clothesline, and finishes with the Dusty Elbow at 12:24. Perfectly acceptable preliminary match, with one bad botch. Much better than the edited down version featured on Prime-Time Wrestling that still left the spot intact. **1/4

I'm just hoping for a short match. Slaughter does not have General Adnan in his corner. We get some stalling to start. Monsoon calls it "both men being overly cautious". Lockup and Volkoff with a shove into the corner. Slaughter with a side headlock, but a shoulder tackle does not budge Volkoff. Two more, and still no effect. Volkoff with a headlock and shoulder tackle, followed by a pair of slams. Slaughter with a cheap shot to take control. Volkoff with lefts and rights, but Slaughter hides in the ropes. Whip and Slaughter with an elbow. Knee drop gets a two count. Volkoff ducks an elbow and hits his signature roundhouse kick. Volkoff with a series of boots and knee lift for two. Whip and a clothesline for two. Slaughter ducks an elbow and hits an awful clothesline, with an even worse bump from Nikolai. Slaughter works the back, and the Camel Clutch finishes at 8:31. No Atomic Noogie!? I'm disappointed. This match felt like it came from 1984, and even then, it felt dated. -*

Lord Alfred Hayes is filling in for Heenan. The Barbarian seems directionless since his singles run started shortly before WrestleMania VI. Lockup and shove to the corner. Barbarian with choking. Whip to the ropes, Santana ducks an elbow and hits a Thesz Press for a near fall. Santana with a side headlock. Shoulder tackle does nothing, so he cradles Barbarian for another two-count. Barbarian counters another headlock with an atomic drop. Santana with a sunset flip. Barbarian blocks, but gets cocky about it, and Santana finishes the move for two. Santana with rights. Whip to the corner and Barbarian catches him in a bear-hug. Santana fights free but takes a big boot to the face. Santana fights out of another bear-hug, but Barbarian stays in control. He slams Santana into the turnbuckle but misses a second rope elbow drop. Whip to the ropes, Santana with a fist to the midsection, followed by a running clothesline. He goes for the Figure-Four, but Barbarian throws him off. Santana bounces off the ropes but gets caught with the Hot Shot for a near fall. Barbarian goes to the top rope, but Santana ducks the flying clothesline! Santana makes a trip to the top rope and hits a flying body press, but Barbarian rolls through and hooks the tights for three at 13:23. The bear-hug sequence in the middle killed the momentum of what was looking to be a decent match. *1/2

The gimmick of the advertisement is that a coin toss would determine which member of Power & Glory would compete. In the data available on TheHistoryOfWWE.com, Paul Roma competed 9-times, and Hercules 7-times, with only one loss coming between them (Roma in Albuquerque, NM). Useless "fact" checking! This would be recycled for Super-Tape Vol. III. Jannetty hits both with a dropkick before the bell. He blocks a boot from Roma and counters with an atomic drop. Jannetty with mounted punches in the corner, followed by a hurricanrana. Roma uses the tights to throw Jannetty to the floor. Jannetty sweeps the leg and pulls Roma out, only to get rammed against the ring. Whip to the ropes, Jannetty scoots to the apron, and slides back in between the legs. Whip, Jannetty sets too soon, and Roma clubs him across the back. Roma sends him from corner-to-corner and comes off the top with a sledge for two. Roma with two back breakers and a running power-slam. He wastes a lot of time before covering. Jannetty counters a hip toss with a back slide for two. Small package for two. Jannetty fights out of a chin-lock but gets turned inside out with a short-clothesline. Jannetty picks Roma up on his back and rams him into the corner to escape another chin-lock. Whip is reversed, but Jannetty misses a dive into the corner. Jannetty blocks a suplex and counters with his own. Jannetty gets the better of a slugfest and follows with an inverted atomic drop and clothesline. Whip to the ropes and diving elbow. Fist to the midsection and running knee lift. Roma meets a boot in the corner and Jannetty with a modified bulldog from the middle turnbuckle. Jannetty comes off the top with the flying fist drop, but Hercules pulls Jannetty to the floor. Back inside, Jannetty with a Super-Kick. He goes for a slam, but Hercules sweeps the leg, and Roma lands on top for three at 13:38. The chin-lock sequence in the middle went a bit too long, but otherwise a good match with fast-paced action. ***

- Intermission! We get promos hyping the next card at the Garden, from Tugboat, Mr. Perfect & Bobby Heenan, Ted Dibiase (still with Sapphire, so probably taped way in advance), and the Hart Foundation. <

Bradley is subbing for Akeem, who was moved to a different tour as a fill-in for Bad News Brown against Jake Roberts as one of the top matches on the card. Bradley is looking more muscular than usual. I don't think I need to say any more to get my point across. Lockup to the corner and Bradley with rights. Garvin responds by throwing him across the ring with a handful of hair. Bradley with a side headlock. The usual polite MSG crowd doesn't hesitate chanting boring after a few minutes of nothing. Bradley does his awkward back flip elbow into the corner. Garvin with a small package for two. Bradley with a slam, followed by choking. Garvin finally mounts some offense and rolls him up for two. Whip to the ropes and Garvin hooks a sleeper. He lets go and gives Bradley his patented Garvin Stomp. He goes for the "Reverse Figure-Four", but Bradley rakes the eyes. Monsoon speculates if there's an injury to explain Garvin's lackluster performance, then asks if Bradley is a graduate of the Terry Garvin School of Self-Defense. Garvin comes off the top with a flying body press for two. Crowd boos the kick-out. Bradley with a jumping elbow drop for two. Garvin with a small package for two. Bradley blocks a piledriver and sunset flip, but gets cocky, and rolled up for three at 13:20. This was lame, the crowd hated it, and turned out to be Garvin's final appearance at MSG. -1/2*

Lord Alfred is back on commentary. Rude went from touring against the WWF Champion to fighting the guy who is used as a Six-Man Tag partner or maybe a C-Tour headliner. That was a quick drop. Long lockup. Rude does push-ups to display his physical superiority. Another lockup goes in Duggan's favor. Rude stalls, so Duggan calls him out being a chicken. Rude rakes the eyes before they could lock-up for a test-of-strength. Whip to the ropes and Duggan sends him to the moon with a backdrop. Duggan with an atomic drop, clothesline, and slam. Whip and Duggan grabs a bear-hug. Rude bites to escape, so Duggan bites him back. Rude catches Duggan with his head down and drops him with a clothesline. Rude from the top with a sledge across the face for two. Rude with a chin-lock. Duggan escapes with elbows but gets caught with a sleeper. Rude climbs the ropes again but gets nailed on the way down. Duggan sends him from corner to corner but misses a shoulder tackle. Rude pounds away in the corner. The referee chastises him, so Rude tosses him for the Disqualification at 9:08. Post-match, Duggan chases him from the ring with the 2x4. Before the next match, Heenan gets heat for mocking Boss Man's mother, so Duggan scares him off, too. Weak effort. ¾*

The Ultimate Warrior & Legion of Doom vs. Demolition:

Main Event of the night. Vince McMahon must've been having heart attacks at the idea of so many people wearing face paint. This would also be recycled for Super-Tape Vol. III. Warrior runs over some schmuck on his lap around the ring. Quarter-star right there. The Warrior and LOD quickly clear the ring with clotheslines. Smash with axe-handles to Animal. Whip is reversed and Animal takes him over with a Power-Slam for two. Hawk and Crush get into a shoving match. Crush with an eye rake and back breaker. Hawk comes back with a clothesline and dropkick. Whip and Hawk with a diving shoulder tackle. Jumping fist drop for only a one count. Warrior puts the boots to Ax in the corner. Whip is reversed, but Warrior gets a boot up and runs him over with a clothesline. He slams all three members of Demolition but misses a Splash on Ax. Warrior gets dumped and double teamed on the floor. Hawk tries helping but gets tossed. Animal breaks up the Decapitation attempt. Animal cleans house briefly, but Smash saves Ax from the Doomsday Device. Crush with a bear-hug. Animal turns it around, but Ax breaks it up. Side note: Monsoon keeps referring to the LOD as Doom. Animal gets worked over while the referee tries to keep order. Smash with a back suplex for two. Ax with a snap mare into a chin-lock. Animal lays out Crush with a clothesline and hot tags the Warrior. Clotheslines to Smash while LOD takes out Ax and Crush. Shoulder tackle and Splash finishes at 13:05. Nothing spectacular, but decent. The crowd interest wasn't as high as you would expect, either. **

Final Thoughts: Lackluster show. The two best matches were a preliminary opener (Dustin/Diamond) and undercard nothing match (Roma/Jannetty). The Main Even Tag was alright, but the only other match with star power (Duggan/Rude) was worse than I anticipated with little effort from both sides. Volkoff/Slaughter put on a dated match, and don't get me started on the mess that was Garvin/Bradley.