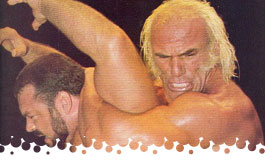 Our next MSG show on the docket sees a HUGE double main event plus various other matches of interest!


Note: The official release of this show omits the first three matches to take place, which can best be thought of as Jobber Paradise, with Lenny Hurst vs Rocky Tamayo, Johnny Rivera vs Joe Turco, and S.D. Jones vs Jack Evans. No biggie, though it would have been nice to see Special Delivery whoop ass on someone lower down the food chain than he was.

Setup: The Rock's Granddad comes to MSG to face the former World Champion Stan The Man.
Match: Maivia cuts a promo pre-match where he says he is "proud and happy to be in this...place." Guess Dwayne didn't inherit his mic skills from him. Stasiak seems to be pushing a redneck gimmick, being announced from "Buzzard's Creek, Oregon". The crowd is HOT for this match, and so is McMahon, who goes crazy whenever Stasiak tries his dreaded heartpunch. The two get into it on the apron, and Stan tries his signature move, only for Maivia to move and make Stan punch the ringpost! Maivia reenters the ring, and Stasiak must have blacked out from the pain, as the referee counts him out and The High Chief gets his big win.

Result: Maivia via countout at 7:35
Rating: 2 (Good) A hot, hard fought match with a decent finish.

Setup: The future Living Legend and Captain Wicked Perm face off against a team best described as The Masters Of The Foreign Object.
Match: All four men fight in the ring pretty liberally in this one and early on Steele and Scicluna dominate Larry and Tony, stomping the holy hell out of them and beating them into the ground. Eventually the referee seems to think they're being too violent, so he calls for the DQ on the heels to end the First Fall. Fall 2 sees Larry really take charge of Scicluna, and show signs of his future greatness while Garea still gets beaten by Steele and pretty much has to be saved. The Finish comes when Zbysko holds The Baron in a front facelock and tags Garea, who does a pretty sunset flip over Scicluna to get the pin.

Result: Garea and Zbysko via 2 Falls to 0
Rating: 2 (Good) A bit clusterfricky at times for my taste, but still good and made Larry look like the man.

Setup: Having survived the onslaught of Bruno rematches, Superstar defends the title in the Garden against the Polish Power.
Match: Superstar cuts a promo prematch and man, if they had let him run with the title as a face he would have been incredible. He also wears a cool Arizona State muscle shirt to the ring as well and manages to make Ivan look puny in comparison. Putski at least is super over in the 70s WWWF world of ethnic babyfaces, and the crowd's enthusiasm and Superstar's ability to carry him cover up much of his flaws here. Lots of power exchanges and brawling, with Putski blowing his wad and hitting the Polish Hammer too early which sends Graham into the ropes and saves his bacon. Eventually Putski thinks he has Superstar in trouble with a couple of shoulderblocks, only to have Graham backdrop him over the top rope on the third attempt. Putski must have landed pretty hard, as the referee counts him out and he doesn't get up until two minutes later and limps back to the locker room without a word of protest.

Result: Superstar via countout at 18:01 (Retains Title)
Rating: 2 (Good) Though not a pinfall finish, pretty much a clean win where Superstar legitimately outsmarted his babyface opponent.

Setup: The "former AWA champion" comes from the frozen tundra of Minnesota to face Nikolai in The Garden.
Match: Verne certainly proves he was NO joke as a wrestler, as he basically DESTROYS the much bigger Volkoff, tying him up in knots and causing Nikolai to do a lot of his trademark yelping like a dog. McMahon talks extensively about Verne and his feud with Nick Bockwinkel in the AWA as well as even giving a shoutout to NWA Champion Harley Race and I feel as if I've entered the Twilight Zone. Volkoff tries to use his power but Verne's acumen proves to be too much as he is rolled up after a backbreaker attempt and pinned down.

Result: Gagne via pinfall at 7:10
Rating: 2 (Good) Certainly good for what it was, a non-WWE legend making a rare MSG appearance and wrestling circles around a much bigger brawler.

Setup: Not sure what the basis of the feud is, but apparently these two hated each other enough to go No Holds Barred.
Match: You know, even as he's promoted as an Olympic athlete and wears a big USA symbol on his tights, you wonder how Patera could be such a hated heel. Bruno don't mess around though, and the brawl is under way, although the lack of weapons in such a match is perturbing, and Bruno has obviously lost a step from his whirlwind days. Eventually Patera locks on a full nelson and Bruno kicks out of the corner and lands on top, allowing him to get the win with a Moolah Finish.

Result: Sammartino via pinfall at 12:13
Rating: 1 (Okay) I know, I know, the Moolah Finish helps a heel to hold onto his heat, but still there was something...lacking here.

Setup: These two had had a boring match in MSG on 6/30/73, but at least on this go the curfew time is near.
Match: Blassie comes out with Fuji here and actually gets physically involved(!), first by being chased around by Strongbow and then attacking him with his cane for a 2 on 1 beatdown prematch. Eventually Blassie leaves ringside and the match begins and it isn't long before Fuji starts in with the nervehold crap again, with Strongbow fighting him off a couple of times before the bell rings and the fans are told to get the hell out.

Result: Curfew Draw at around the 6 minute mark.
Rating: 1 (Okay) This score is solely for Blassie's unusual pre-match involvement, without him it's an easy Zero.

Overall Rating: 2 (Good) Better than most available shows of this era, even with a disappointing Bruno match (and the omission of the jobber matches), so if you dare, see if you can get it from your most trusted online retailer.