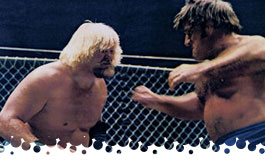 Our next available show sees a VERY hot sold out crowd come to see Bruno return prematurely from a broken neck to meet Stan Hansen in the cage!

Setup: Two charisma-free nobodies jerk the curtain because, well....?
Match: These two guys couldn't draw flies in a pile of dung, but the fans who came to see Bruno get into the match regardless. Rivera is said to be "very popular", and hits a lot of high flying moves on Canitz but still fails to get the pin (perhaps there's no power behind them). Canitz uses sneaky tactics to stay with it with some nice chain wrestling thrown in until Rivera finally catches him for the 3 count.

Result: Rivera via pinfall at 10:41
Rating: 1 (Okay) The chain wrestling kept it from being a total snooze.

Setup: Two of the greatest jobbers of all time meet in this epic battle at the Garden.
Match: WWE Hall Of Famer Rodz was unpredictable before Dick Slater made it cool, while S.D. will always be known for being squashed by Bundy in record time at the first Mania. Apparently both guys were pretty over at this time, as the crowd is hot for it. Rodz uses dirty tactics until he punches S.D. on top of his head (uh-oh) and sells it like he broke his hand. Quite a good brawl, which ends with Special Delivery getting the pin.

Match 3: The Executioners vs Jose Gonzalez and Dominic DeNucci (2/3 Falls For The World Tag Team Titles)

Setup: Having recently won the belts from Parisi and Cerdan at a TV taping, the masked champs defend against an ethnic face team.
Match: The Masked Executioners are, in reality, Killer Kowalski and Big John Studd, and early on their continuity is BEAUTIFUL, cutting the ring in half and beating their smaller opponents to a pulp. Kowalski reveals his true self by resorting to the claw hold throughout the match, while DeNucci actually manages to BODYSLAM Studd, but alas, masked men don't give away 15 grand. The champs take the first fall by pinning DeNucci with a double backbreaker, then in the second fall we have Gonzalez (who's built like a little fire hydrant) constantly going for Kowalski's mask while also making the mistake of distracting the ref so the heels can double team some more. Finally DeNucci gets pissed and hits an airplane spin on Kowalski for the second fall. Third fall doesn't last long as little Jose also tries to slam Studd only to get hit in the balls by Killer, causing Big John to fall on top for the pin.

Setup: Brody makes his big debut in MSG, and poor pre-Satan Kevin is the piece of meat thrown to him.
Match: The Grand Wizard comes out with Brody as McMahon mentions him being the number one contender. Straight out destruction here, as Brody beats Sullivan stiffly and finishes him with the Human Torture Rack backbreaker.

Result: Brody via submission at 2:29
Rating: 1 (Okay) Got the point across that Brody is a monster.

Setup: The Fake Native Americans are the number one contenders but first need to clean up a couple of bums.
Match: The Italian Strongbow is said to "need no introduction", while Whitewolf is really the one and only Iraqi madman General (Sheik) Adnan Al-Kaissie. Tamayo sports a wicked afro while Scicluna continues to sadly labor under the delusion that he is a big and important star. Not much to speak of as the Baron uses an international object as his primary offense before tagging Tamayo, who quickly loses the fall when Adnan Whitewolf catches him with a double tomahawk chop.

Setup: Hansen had broken Bruno's neck legit four months earlier, and Bruno was rushed back at great personal risk to take revenge because ticket sales had been dropping.
Match: Anyone that knows anything about Bruno is that you DON'T want to face him angry in a cage, and Hansen clearly doesn't realize how badly he's screwed up. Hansen attacks Bruno as he enters, and that's really all Big Stan can do as Bruno takes over and beats the living poo out of Hansen for the rest of the way. Multiple throws into the cage leave Hansen a bloody mess, and after Bruno decides he's beaten him into enough of a quivering pulp, casually strolls out of the cage and back to the locker room.

Result: Sammartino via leaving the cage at 11:11 (Retains Title)
Rating: 2 (Good) VERY brutal beating, but at least Big Stan took it like a man.

Setup: Bobo gotta come do his thing so he gets a guy nicknamed "Gashouse".
Match: Not sure if this is Eddie Gilbert's brother or not, regardless Bobo is attacked as soon as he hits the ring but the ring announcer still announces both men while the fight is on. Bobo comes back and hits his big headbutt, which sends Gilbert out of the ring and running back to the locker room while Bobo never even got his jacket off.

Result: Brazil via countout at 45 seconds
Rating 0 (sh*t) There was no match here, just a guy running away.

Setup: The future head of Devastation Inc. is undefeated, but now has to take on the "leader of the Polish Army".
Match: At least Putski played up the goofball aspect of his character well, grabbing the mic and babbling away happily, while it's interesting to see Akbar as an actual wrestler and not just an evil manager. Putski yells into the mic that's he sending Akbar back to Tel Aviv. The bell rings and we don't have much to work with here, as Akbar tries some sneaky stuff but soon gets overpowered and Polish Hammered to death for the pin.

Overall Rating: 1 (Okay) Some jobber junk, but seeing Bruno deliver one of his more brutal beatings was nearly worth it, plus the tag title match was solid, so if you wish, be sure to order this show from your most trusted online retailer.