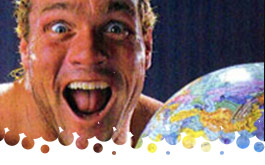 - The 2nd of 3 nights in the New York/New Jersey market. This is an incomplete show, though most of the "important" matches are featured. What we will NOT be getting to see includes: Skip def. Aldo Montoya, Men on a Mission def. The Smoking Gunns, Jean Pierre Lafitte def. Doink (the Clown), and Hunter Hearst Helmsley def. Duke "The Dumpster" Droese.

Yay, we're treated to this garbage instead of several decent options that didn't make the cut. Rock thrills the live crowd by showcasing his guitar skills. Backlund rudely dropped Mr. Mountain's guitar to set up this little house show loop rivalry. Did I mention the WWF lost several million dollars in 1995? They stall. A LOT. Backlund offers a handshake, repeatedly. First contact is made at 4:00, with Rock taking Backlund to the ground, amateur style. Backlund goes to the ropes to hide, but Rock rolls him up for three at 4:38. What the hell was that?! Post-match, Backlund jump the Mountain Rocker and brings him down with the Cross-Face Chicken Wing. Whatever. -***

This was originally scheduled as a Tag Team Title defense, but Ramon was injured the night before, forcing some changes for the next few weeks. Yoko and Owen do the old house show "flip a coin" trick to decide who will compete. Vega counters Yokozuna's Japanese flag waving by showing off a mini flag of Puerto Rico. It gets the babyface pop, so that could mean one thing… bring Pedro Morales out of retirement and put him over the regularly featured Superstars and make them look like geeks. Whoops, that's 2019 mentality, sorry. Yokozuna's distraction allows Owen to attack from behind. Whip is reversed and Savio runs wild with a hip toss, dropkick, and slam. Vega avoids a boot in the corner and unloads with mounted rights. He takes Owen over with a back body-drop and sends him out of the ring with a clothesline. Owen tries to bail, but Savio follows and gives the Tag Champions a double noggin knocker. Yoko even does his stagger sell, walking into the post, for good measure. Owen uses another distraction to send Savio out of the ring with a dropkick. Yoko gets a few shots in while referee Danny Davis is distracted. Back inside, Owen puts the boots to Savio. Owen with an elbow and leg drop for two. He feeds the boot to Vega and connects with an enzuigiri for two. Whip and Owen hops on his back with a sleeper. Vega rallies to his feet and rams Owen backwards into the turnbuckle. Savio with a flurry of right hands and a back body-drop. Owen counters a second attempt with a glancing blow (as in it missed entirely). Whip to the corner is reversed, sending Owen chest-first into the buckle, and Savio rolls him up for three at 7:24. Post-match, Vega fights off both Owen and Yokozuna to stand triumphant. Solid match, though the finish was weak. **3/4

I'm longing for days without the Million Dollar Corporation, or at least the Corporation without Tatanka featured regularly on all the shows. No cartwheel from Bigelow, but he does have Max Moon's pyro launching jet pack. Tatanka tries an attack, but Bigelow throws him over the top rope. Bigelow follows and gives him a slam and suplex on the floor. Tatanka somehow tricks Bigelow into the ring for a few cheap shots, but Bigelow quickly regains control. Whip to the ropes and Tatanka with a body press for two. He tries it again but Bigelow counters with a spine-buster for a two-count. Tatanka avoids a charge to the corner and hits the End of the Trail™. Despite being Tatanka's finisher, Bigelow staggers to his feet, only to get clotheslined out of the ring. Back inside, the usual Tatanka heel offense commences. Odd spot where Bigelow blocks a kick and goes for an enzuigiri, but somehow, with his foot held, Tatanka avoids the kick. Bigelow fights out of a chin-lock and plants Tatanka with a slam, wiping out the referee in the process. He climbs the ropes and hits the flying headbutt, but there's no count to be made. Dibiase hops in the ring for a distraction that helps nobody as Bigelow hits a DDT. He climbs the ropes again, this time teasing a moonsault, but Dibiase sweeps the legs, knocking him down, presumably landing on his head. Tatanka with the slow crawl into a cover for three at 6:39. WHAT A GEEK. *

Bomb sure earned this spot, huh? No Roadie at ringside for the second night in a row. Did you know that Adam Bomb's legion of fans were known as "The Bomb Squad"? Lockup and Bomb with a shove. Jarrett naturally complains about a hair-pull. Jarrett goes for an overhand wristlock, but Bomb is too strong and throws him down with ease. Next attempt, a side headlock. Same result, with Double J taking another powder. Jarrett sweeps the leg and unloads with rights. Bomb shrugs it off and connects with an atomic drop and clothesline for two. Crisscross and Bomb counters a leapfrog with a powerslam, then sends Jarrett out of the ring again following a running clothesline. Jarrett teases taking a walk, but Savio Vega cuts off the exit. Bomb tosses him back in the ring, only to get knocked to the floor like a geek. Jarrett with a choke across the ropes while taunting Vega. Whip to the corner and Jarrett with a swinging neck breaker for two. Jarrett with a flying clothesline and more trash-talk to Savio. Bomb ducks under an elbow and flies through Double J with a cross body press for two. Jarrett quickly recovers and hits a dropkick for a one-count. Jarrett with a sleeper, but Bomb escapes. Whip to the ropes and Bomb with a DDT for a near-fall. Bomb with a hip toss and series of clotheslines. Whip to the corner, Jarrett greets him with a boot, sweeps the legs, and puts his feet on the ropes, but Savio forces the referee to stop counting and shows him what's up, and DOESN'T get Bomb DQ'ed? Bomb with a distraction roll-up on Double J for two. The WWF is LOVING THAT SPOT on these shows. Jarrett decides to go after Vega, and gets counted-out at 11:40, awarding the match, but not the title, to Adam Bomb. Decent, but Bomb isn't the worker Razor is as far as a big man making the smaller heel look great, and we got another weak finish. **1/4

Michaels is subbing for Diesel, making the match about 200x better by proxy. Shawn attacks from the top rope and slams Sid's head repeatedly into the canvas. Sid blocks being rammed into the cage and pounds away with his terrible looking punches. Whip to the ropes and Shawn with a pair of boots before slamming Sid face-first to the canvas. Sid prevents escape and knocks Shawn down from the top rope, to the canvas. Shawn blocks Sid's climb with a waist-lock but goes flying from an elbow. Sid sends Shawn from corner to corner, hitting him with rights in between. He charges in after the third time and misses a diving shoulder tackle. Both men climb and trade blows from the top rope, with Shawn taking another big bump. Sid seems to have things in control but takes forever and a week to get a leg over the cage, buying Shawn time to block. Sid fights him down again, and this time Shawn rattles the cage, straddling Sid across the top rope in the process. Shawn goes for the door, but Dibiase slams it back in Shawn's face. Sid pummels Shawn in the corner rather than go for the easy escape. His punches ARE SO F'N BAD. Whip and Shawn does the flip in the corner, smacking his legs into the cage.  Sid "climbs", but Shawn won't stay down. He throws a few rights, but Sid stands tall and slams Shawn into the cage. Shawn keeps fighting from his back and gets rag dolled. Shawn almost clings to the cage on a throw but takes the bump when the grip doesn't take. Whip to the ropes and Shawn surprises Sid with a DDT. Sid zombie-style sits up and pulls Shawn back in by his hair, capped off by slamming Shawn from the top of the cage. Visually, the match should be over, but it's Sid. He punishes Shawn some more, planting him with the one-handed chokeslam and a Powerbomb. It's even more over. Sid calls for one more. He balks and goes for the door, but Dibiase stops him and convinces him to finish the job. Shawn limply gets to his feet and uses the tights to send Sid into the cage. Shawn forgoes the easy route and climbs the cage for the victory at 15:07. Post-match, Tatanka ambushes Shawn and throws him back in the cage for some extracurricular shenanigans. Shawn eats a Powerbomb before the save is finally made by Bam Bam Bigelow after the unsuccessful attempts from Aldo Montoya, Savio Vega, and Billy Gunn to break into the cage. This went way too long for a Sid match hampered by the cage gimmick, but it was watchable thanks to you-know-who. **1/2

Final Thoughts: For what's preserved on video, the only match that really stands out is the Main Event of Shawn and Sid in the cage, and even that isn't good enough to go out of your way to find a copy. There's a couple of decent matches elsewhere, but it's all very basic stuff, as well as an absolute stinker and the laughable treatment of Bigelow getting his big babyface push.