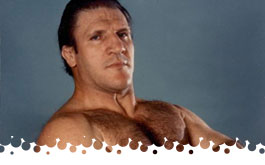 Nearly a year later, the next available MSG card features a major battle (though not the last) between Bruno Sammartino and Superstar Billy Graham for the title!


Note: The release of this card omits the opening match between seemingly two jobbers in Frank Monte vs Pete Sanchez. Just as well.

Setup: Fred Blassie has a new discovery, the "grandson of the world’s strongest man" (though who that man is is never said) and he needs some fresh meat.

Match: Blassie comes to the ring with Cyr, and talks a LOT of shit, to Flores, the fans, the ref, and even the ring announcer before leaving. Cyr is your usual slow-witted lumberjack, while Flores is your typical genial, balding, Mexican babyface. Not a lot of action save for punching and kicking from two charisma-lacking guys, though some nice near-falls towards the end improve its lot before Cyr hits a shoulderbreaker for the win.

Setup: Arion has demanded an opponent on this night, and the pudgy pre-Satan babyface Sullivan is served up on a platter.

Match: Those who remember Satanic Sullivan may be surprised here, as he sports no beard and short hair, but still has his flabby physique. Arion was obviously on the tailend of his career and looked a bit chubby himself. Some decent back and forth before Spiros hits the atomic drop to end it.

Result: Arion via pinfall at 6:44
Rating 1 (Okay) Enough workrate to keep me awake.

Setup: Ladd calls himself the "King" (without a crown) and must prove it to the Italian star DeNucci

Match: Lots of fun to watch, as both guys carry an aura into the ring (especially the Big Cat) and thus things never get boring. Ladd gets a psych-out edge with a lot of stalling, and McMahon wonders aloud about that taped up thumb. Eventually Ladd hits DeNucci with the Thumb Of Doom and puts his legs on the ropes for good measure.

Setup: This dream match of the 70s sees the Polish Power take on the Russian Bear.

Match: Extremely good power vs power matchup here with a hot crowd as the two exchange bearhugs and other power holds with near-perfect psychology. Unfortunately both men fight onto the apron and the idiot ref counts them both out even though Koloff was reentering the ring (and it should be noted that ALL the refs on this night were usually slow and out of position).

Result: Double Countout at the 11:00 minute mark
Rating: 2 (Good) Proof that restholds in a match can work with great psychology.

Setup: Freakshow Time, so let’s just toss some midgets in the ring to fight, it don’t matter which ones.

Match: I guess when you’ve seen one midget tag team match, you’ve seen them all, with the only variation being BOTH teams brawling between themselves over various mistakes and a tendency from the face midgets to bite their opponents on the ass, plus you NEVER hit a black babyface on top of the head because well… Eventually the good guy dwarfs get the win, and all is well in Munchkinland.

Result: Coco and Louie via 2 falls to 0 at 18:29
Rating 1 (Okay) At least their usual comedy spots were on target.

Setup: Superstar had earned a countout win over Bruno at the last MSG show, and this is their big rematch.

Match: This was one of THE big rivalries of the late 70s, and the passion is there, for even though we get the dreaded "match joined in progress" logo, we still get a good 15 minutes of heated action here. The crowd is going insane while these too exchange powerholds back and forth, and eventually Superstar gets busted open bad. The referee tries to hold back Superstar to check on him, but he gets tossed aside. The two legends go at it tooth and nail until the bloodied Superstar is too blinded to connect with his shots, and FINALLY the ref stops it due to blood, making Bruno the winner but taking NONE of Superstar’s heat away from him.

Result: Sammartino via Referee Stoppage at 17:55 (Retains Title)
Rating 3 (Great) A hard passionate match between Bruno and one of his greatest rivals.

Match: Oddly enough, despite his obscurity, Scicluna IS a WWE Hall Of Famer, while Barrett looks like an out of shape Irish jobber. Indeed, when Barrett turns his back stupidly, Scicluna is all over him, stomping one mudhole in him after another. After enough stomps to give the man multiple concussions, Barrett regains his feet and gets off a couple of token moves, before the Baron whips him into the corner, and Barrett catapults his own head into the turnbuckle for the finish.

Result: Scicluna via pinfall at 6:44
Rating 1 (Okay) Really just a fun to watch asskicking of a particularly pussy soft babyface.

Match: Parisi’s partner, Louis Cerdan, was apparently stranded at the airport, and that must have put Tony out, as he leaves Bobo in to work most of the match. Blackwell was always one of the more unpleasant fat guys, and Bugsy was more of a crazed animal than the "zany" guy you might have seen in the early 80s. The first fall is a DQ as dumbass Bugsy chokes Bobo with the tag rope in front of the ref. Soon Bobo gets the tag to a very fresh Parisi who bodyslams 400-lb Blackwell and hits the Cannonball off the top for the winning pin.

Result: Brazil and Parisi via 2 falls to 0 at 11:34
Rating: 2 (Good) Solid match, with a definitive finish that turned out to be enjoyable.

Overall rating: 1.5 out of 3. Pretty good card, with Bruno and Superstar really bringing the house down, and you too can witness this history by ordering from your preferred online retailer.