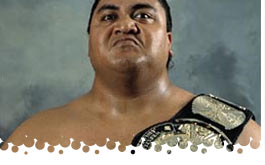 - Taped from the Westfalenhalle in Dortmund, Germany, on February 6th, 1994, part of 10-day long European Tour, something that became more and more regular for the WWF during their down-years of the mid 90’s. Considering how weak the roster was becoming, could you believe that this isn’t a loaded card? The only notable happening during this tour was the termination of Marty Jannetty, bringing his all-time WWF total to about 67. No idea why, maybe he got loaded one-time too many and they figured “it’s only Marty Jannetty, will anyone really care if he’s gone?” Side Note: This show only runs 70-minutes long, which means the following matches weren’t recorded for reasons that may involve visiting the toilet and/or the concessions: Doink the Clown going over Bam Bam Bigelow, and Diesel defeating Marty Jannetty in a “loser goes back to rehab” match. I’m usually not too upset about missing matches, but when a website lists the matches as being on the disc, you feel a bit disappointed.

We’re off to a great start. We’ve got Billy, but no Bart. I guess Bart Gunn stuck around for the North American tour, doing jobs for recently (no pun intended) rocket-strapped-to-him Owen Hart. Bomb doesn’t have Harvey Wippleman with him, probably because the WWF was cutting down on sending managers on the road, especially overseas when they aren’t needed. Lockup and Bomb with a shove to the corner. Gunn with a side headlock, but a shoulder-tackle doesn’t benefit his cause. Bomb blocks a roll-up attempt, but runs into a drop toe hold. Gunn with a flurry of rights and a drop-kick, sending him to the floor. Bomb wants a test-of-strength and actually dominates for a bit before resorting to cheap shots. Gunn counters with a monkey flip and works the arm. We get some fancy ZOOM work as Billy cranks on an arm-bar. Whip to the ropes and Bomb surprises Billy with an elbow. He follows Gunn to the floor and lays him out with a clothesline. Back inside, the Neutron Bomb (slingshot clothesline) gets a two count. Bomb with a dropkick (quite impressive for his size), sending Gunn back out of the ring. Snap suplex into a cover gets two. Bomb with a snap-mare, and its chin-lock time. Gunn escapes and takes Bomb over with a sunset flip for two. Bomb quickly regains control with a clothesline. Whip to the corner, Bomb meets boot on a charge, and Billy hits a big clothesline from the second rope. Billy wins a slugfest and hits another clothesline. Whip to the ropes, boot to the midsection and DDT. Gunn to the top rope, but Bomb avoids the flying body press. Bomb finishes with the side suplex for three at 10:20 (time approximate). No Atom Smasher? I’m disappointed. ** I was expecting a bomb (pun intended), but was surprised by the effort and competent work from one guy who was mostly working tags and another who you just can’t predict.

Good gravy, Jim Powers is still kicking around (and using “Crank It Up”) and looks juiced. Kwang is WWC headliner Juan Rivera (TNT), but probably better known to the WWE audience as Savio Vega. Kwang was given a few weeks of hype before being rushed into main events subbing for an injured Ludvig Borga. Imagine the disappointment of a Great Muta/Kabuki knock-off as your Main Event substitution… 4 years later, he would repeat the process at No Way Out. Ha! Didn’t think I could work that one in, did you? They trade waist-locks and wrist-locks until Kwang grabs the ropes. Kwang with a cheap shot in the corner. Whip to the ropes and Powers sends Kwang to the floor following a hip toss and clothesline. Back inside, Powers cranks on a headlock for a solid three minutes. Considering the immediate use of him on TV, why is Kwang being treated as a scrub for Jim Powers? Kwang finally takes control and spits mist, the highlight of the match thus far. He shows off his martial arts skills of choking and hits a tame spinning heel kick for two. Powers with a body press out of nowhere for two, sandwiched by LONG nerve holds. Whip to the corner, Powers gets a boot up and rams Kwang to the buckle. Powers with a fist to the midsection and running knee lift. Whip to the ropes and a drop-kick gets two. Another whip, Kwang with a funky leap frog and a reverse crescent kick finishes at 12:33. DUD Short and simple, this wasn’t very good.

(Jacques & Pierre vs. Rick & Scott Steiner)
No Johnny Polo at ringside, again, probably budget cuts for an expensive tour. The Steiners were just going through the motions at this point, waiting for their release and deliberately left off the WrestleMania X card in favor of the less popular and less logical choice of Men on a Mission. Scott and Pierre start. Lockup and Scott quickly takes him over with an arm-drag. Pierre goes for a hip toss, but Scott blocks and counters. Whip to the ropes and Scott connects with a double-underhook suplex. Jacques tags in and immediately hides from Rick. Those cowardly French-Canadians. Rick catches Jacques in mid-air with a Power-Slam for two. Pierre comes off the top with a double axe-handle, but a second trip is countered with a slam. Lots of stalling, more so than usual between these two teams. I can’t tell, but is that a U-S-A chant!? Scott continues to dominate both Quebecers until a cheap shot from behind finally puts him in peril. Jacques slams Pierre across the chest of Scott for a near fall. CHINLOCK! Jacques cuts off the hot tag attempt and back drops Pierre on top for another two count. Jacques with a piledriver, but the Tower of Quebec misses. Rick with the hot tag. He dumps Jacques on top of Pierre with a press-slam, and Scott sends Pierre to the floor with a clothesline. Rick with a belly-to-belly suplex, Scott hits the Frankensteiner, and Jacques pulls Pierre out of the ring and they take the easy Count-Out at 12:22. I already typed in “Jacques tackles the referee for the DQ”, so at least they changed the finish from the norm. *1/2 This one never seemed to get out of second-gear. Just a lot of resting and stalling. Crowd still ate it up with a spoon.

Jarrett is subbing for Ludvig Borga for the entire tour. Luger is “Made in the USA” and scheduled to be part of the unique WWF Championship scenario at WrestleMania X. Jarrett would spend most of 1994 floundering in the mid-card. Another loud “USA” chant, which just seems odd coming from a foreign country. They must really dig Luger. They trade hammer-locks until Jarrett goes to the ropes to force a break. Luger grabs a waist-lock, and I almost anticipate a german suplex every time he picks Jarrett up. We get some stalling, then suddenly the camera points to the ceiling, we get a jump, and we return to the action with Luger making Jarrett submit to the Torture Rack at around the 4:00 mark. Well, no point in rating this one, considering I don’t know what the hell we missed. Yet another match that falls under false advertisement, but to be fair, the match was sucking, so I’m not that mad, either.

Yokozuna © (w/ Mr. Fuji) vs. Bret “Hitman” Hart: We’ve got just shy of 20-minutes left on the disc, so I’m assuming the entire match is present. Note that Fuji is the only manager who made the trip, so we can probably expect him to be involved in the finish. Yokozuna throws his ceremonial salt, so Bret just attacks with rights. Yoko catches him off the ropes with a slam, but misses an elbow drop. Bret rolls out of the way of a splash attempt and connects with a leg drop for two. He goes for the Sharpshooter, but Yoko kicks him to the floor, where Fuji greets him with a whack of the flag pole. Yoko with a lot of choking. The crowd rallies behind Hart, but Yokozuna remains in control. We get the trusty Yokozuna nerve hold, so we can relax for a while. Bret escapes with elbows, but gets laid out with a clothesline. Yoko with the (really big) leg drop, sending Bret to the floor, possibly to make sure his nose is still part of his face. Back insie, Yoko goes for the Banzai Drop, but Bret rolls out of harm’s way. They slug it out with Hart gaining the upper hand. He connects with a drop-kick, but Yoko side-steps a second attempt. Yoko with a snap-mare and another nerve hold. Bret fights to his feet, so Yoko brings him down with a back suplex. Whip to the corner, Yoko misses the avalanche. Bret with a bulldog from the second rope for a two count. Bret with three clotheslines, followed by a second rope elbow drop for two. Bret escapes a bear-hug with biting, but runs into an elbow. He gets a boot up on a “charge” and grabs a sleeper, but Yoko escapes by crushing him and the referee in the corner. Bret blocks a shot with the bucket and lays Yoko out with it instead. The referee comes back to life and gets a long two count out of it. Bret slaps on the Sharpshooter, and surprise, surprise, Fuji s-l-o-w-l-y enters the ring and whacks Bret with the flag pole for the DQ at 15:20. *1/2 Hot start and hot finish doesn’t make up for an incredibly weak middle. It’s almost amazing how quickly Yokozuna’s conditioning became a factor in his performance, going from capable of having long matches to almost constantly relying on long rest holds.

Final Thoughts: I don’t know what to complain about first… the quality of the show or the quality of the recording? The wrestling featured was mostly below average. I didn’t expect anything to really wow me, but Bret vs. Yokozuna felt much more flat than I would’ve guessed, and holy dogging it, Batman, it was almost a joke seeing how little effort was being put forth in the Tag Title Match. The rest of the show, or what was there, was just… whatever. As for the recording itself, WOW. Worst I’ve ever seen. I know that the generation quality would be weak due to the origin of the tape, but the video at times was almost unwatchable, the audio was really bad, and while I know the match sucked, I just hate when half of a match is recorded and then boom, it’s over. Even if you’re a fan of fan-cam recordings, strongest possible recommendation to avoid.