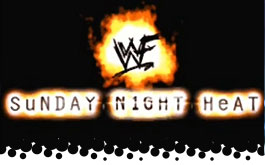 - Taped on September 29th from East Lansing, MI. Shane McMahon and Jim Cornette are calling the action unless otherwise noted. "We’re two weeks away from Judgment Day where we crown a NEW WWF Champion." Card Subject to Change.

X-Pac is the reigning European Champion, and I should note he’s with DX minus Billy Gunn, who was teasing distention within the ranks at the time that ultimately went nowhere. Triple H rips off the Michael Buffer intro, and considering Buffer’s history of litigation over his shtick, I’m amazed Hunter got to do it for as long as he did. Owen comes out completely disinterested, having injured Dan Severn with the Austin Tombstone spot. Because Russo. The bell rings and out comes D’Lo Brown to join the commentary team. Lockup into the corner and Owen with a clean break. WHA?! Crisscross and Owen just stands there to take a dropkick. Owen takes a powder, but X-Pac follows and rolls him back in the ring. X-Pac with a slam and sliding leg drop. D’Lo hypes a rematch he’ll have with X-Pac TOMORROW ON RAW. Whip to the corner and X-Pac straddles the buckle on a missed dive. Owen exits the ring again and X-Pac chases him down again. Owen continues to play defensive until he gives up on an O’Connor roll at 3:11, giving X-Pac the hollowest victory imaginable. If you wanted to see Owen booked to work a match like he doesn’t give a crap, here you go. Unless a match is really good or bad, I’m not rating them. You can imagine how "good" this was based on the story being told.

- Post-match, Michael Cole asks the million dollar question of where Billy Gunn is. Hunter calls him a nimrod and says, "he’s not here."

- Courtesy of Raw, highlights are shown of Steve Austin assaulting Vince McMahon, followed by Kane and Undertaker "breaking" Vince’s ankle after he flips them off for their failure to stop Austin. We cut to Vince McMahon’s hospital room LIVE via satellite to give us an update on his condition. His leg has been CRUSHED and he’ll never forgive Undertaker or Kane for what they did… but it was all Austin’s fault!

Last week on Heat, Matt and Jeff Hardy upset Kaientai, so I expect some 50/50 booking. Lockup and Hardy with a side headlock, followed by a shoulder tackle. Crisscross and Funaki connects with a dropkick. Whip is reversed and Matt with a tilt-o-whirl slam. Funaki powders out but Matt follows with a pescado. Back in the ring, Matt plants Funaki with a reverse slam but misses a flying elbow drop. Hardy regains control and hits a crucifix powerbomb. Funaki brings up the knees to block a Lion-Sault and hits a Fisherman Buster. Funaki to the top rope and a diving headbutt finishes at 2:08. See? They packed in a lot of action, but with only 2-minutes to work with, it’s just moves without a purpose.

The Oddities (w/ The Insane Clown Posse) vs. The Head Bangers:

Last week on War Zone, ICP were a factor in Mosh and Thrasher losing to the freak show, so here’s a rematch to set the record straight, probably with another dirty finish. Mosh goes after the leg of Kurrgan. Whip is reversed and Kurrgan takes him over with a back body-drop. Wow, Kurrgan almost fell over doing a big boot. Thrasher comes in and Kurrgan "dances." REMINDER: PACIFIC BLUE IS NEXT ON THE USA NETWORK. Golga in to work the arm. Whip to the corner and Golga follows in with an avalanche. He comes off the ropes with an elbow and leg drop for two. Thrasher avoids a second avalanche and Mosh hangs Golga up across the top rope. Kurrgan comes in for the save, but the referee chases him off. The ICP straddle Thrasher on the top rope and Golga sits down n Mosh for three at 2:30. PLAY THAT TOTALLY NOT ICP MUSIC!

- Steven Regal is a REAL MAN’S MAN, and he’s coming to the WWF.

Mankind and Shamrock are tag team partners who don’t get along, one of the fanciest tropes of the Attitude Era. Last Sunday at Break Down, they went to war inside a cage (along with the Rock, the winner of the match). Skull and 8-Ball attack Shamrock before Mankind gets to the ring. 8-Ball pounds away and catches Shamrock off the ropes with a side slam for two. The twins take turns dropping elbows. Whip to the ropes and Shamrock hits Skull with a cross body press for two. Shamrock with a arm twist and standing high heel kick. He forcefully tags Mankind in to do some work. Skull forces him to the corner, allowing 8-Ball to get some cheap shots in from the apron. Mankind makes the comeback, but we cut backstage to Steve Austin trying to gain entrance to the production truck. Back to the ring, Mankind is back on defense, getting rocked in the corner. Whip to the ropes and DOA with a double clothesline. Skull (or 8-Ball) with boots. Whip to the corner and Mankind greets him with an elbow, followed by a clothesline. Shamrock short arms Mankind, allowing 8-Ball (or Skull) to cut him off. Mankind with a boot and double-arm DDT out of nowhere. Ellering picks the ankle and gets the fingers in his mouth. Shamrock with a chair and he smashes MANKIND ACROSS THE FACE WITH IT, allowing DOA to pin Mankind at 4:51. Wow, MICK FOLLEY DID A JOB FOR A HARRIS TWIN.

- Steve Austin has successfully entered the production truck and puts an axe to the wire giving the signal to McMahon’s connection. YOU KNOW HOW MUCH MONEY THAT COST HIM?! Before the next match can begin, Steve Austin makes his way to ringside, and even without the belt, he’s still super-over. He’s sitting in on commentary for the final match of the night.

The Rock vs. Jeff Jarrett:

We’re in a weird period where Rock was giving the impression of a slow-burn babyface turn, while Jarrett is looking for a way to get over after ditching the dumb country singer gear and cutting his hair at SummerSlam. Jarrett tries an ambush but Rock counters and unloads with right hands. Whip to the ropes and Rock catches Jarrett with a Samoan drop for two. Whip to the corner and Rock misses a clothesline. Jarrett comes off the second rope with a clothesline of his own and throws some right hands of his own. Whip to the ropes and Rock hangs back to avoid the dropkick. He goes back to pounding away in the corner but is taken down with a swinging neck breaker. MR. MCMAHON joins in on commentary via telephone, so the match is background noise to McMahon and Austin yelling at each other. Jarrett with the seated splash across the ropes. Here’s Dennis Knight of "Southern Justice" to hit Rock with a clothesline while the referee is distracted. Jarrett goes high risk and hits a flying body press, but Rock rolls through for two. Jarrett pops up and hits a clothesline for two. Rock fights out of a chin-lock but runs into an elbow. Rock blocks a suplex and counters with his own, making the slow cover for a near-fall. I HATE JARRETT’S ARM UP AT TWO KICKOUT. Whip to the corner and Rock runs out with a clothesline. Whip is reversed and Rock hits the DDT. He triggers Knight, distracting the referee and opening the door for a blatant low blow. Rock with a slam and the People’s Elbow but Knight pulls the referee out at two. Austin has seen enough and cleans Knight’s and Jarrett’s clock as we never get an official announcement. Obviously a DQ at the 6:00 mark. Rock and Austin have a face-to-face and that closes the show.

Final Thoughts: There’s some highs and lows here, that’s for sure. As expected, most of the matches are short, and sometimes that is a handicap when young wrestlers like Matt Hardy are trying to get so much in with only 130 seconds to play with. The only bad match is X-Pac vs. Owen, solely for the story they were telling at the time. The show-long bit with Austin looking to piss off Vince paid off in a kind of lame way, but teasing Rock and Austin in early October is some great foreshadowing for WrestleMania XV. 1998 WWF is what it is. If you like seeing everyone having a reason to fight, you might like it. If you want long matches and more traditional storytelling, hard pass.