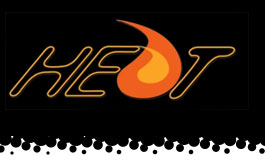 - Starting out in August '98, Sunday Night Heat was introduced to give in to the high demand for more WWF content. Remember, at that time, it was all about Raw is War/War Zone, with a bunch of recap shows and Shotgun buried in midnight timeslots. Heat would feature main event talent often for the first year or so, but when Smackdown debuted on UPN at the end of the Summer, Heat started losing that luster, and soon became the stomping grounds of the mid-card guys that weren't a factor in major (or even minor) storylines. In the Summer of 2000, the WWF ditched the USA Network for TNN (formerly the Hee-Haw Network), resulting in Heat canceled, and moved to the MTV Network. Yes, 16 years after the Rock ‘n' Wrestling connection began, the WWF finally has a regular timeslot on the station, though in 2000, it was a much different world, with gross-out humor taking the place of round-the-clock music videos.

For the first few months, Heat underwent a significant change in presentation. Instead of simply hosting from whatever arena the matches were taped from, Heat was hosted from WWF New York, a restaurant operated in Times Square (and a huge money bleeder from what I've read), with the play-by-play done on location, acknowledging they were watching the matches on tape, instead of pretending to be there live. Also, each week a WWF Superstar (or Superstars, maybe a team or a solo guy with a manager) would be a guest on location and interact with the audience. If it was anyone of importance, it was to sell whatever storyline they were involved in. Lesser talent were there to simply take up space. With that long introduction out of the way (please forgive me), let's get to the action…

- Presented LIVE from WWF New York, MTV personalities D.J. Skribble and Rebecca. OK, quick confession: I was never "hip" to the MTV scene, so I have no idea who these people are, nor do I care. We got a TABLES MATCH and TWO CHAMPIONSHIPS ON THE LINE! "Stone Cold" Steve Austin (just back on TV after a near year-long hiatus due to injury) quickly makes his way to the stage. He snubs the duo and is still on the hunt for the man that ran him over. We throw it to Michael Cole and Tazz, who will be calling all the action throughout the hour. Tazz was still a regular in-ring competitor, and this would be his start in the broadcast position. All matches featured were taped on September 26th from Pittsburgh, PA (part of the Smackdown taping).

Sometime in the summer, the WWF dropped the "Holly" from Crash's name. Regal is back in the fold after his arrival in 1998 involved substance abuse issues and his release. Thankfully, he's ditched the "Real Man's Man" thing and is just a British snob. I guess with Austin and Richards around, we didn't need another Steve/Steven. Cole calls Crash the most-prolific Hardcore Champion in WWF history. Regal with a quick waist-lock takedown. Whip to the ropes, Crash slides between the legs and throws some rights. He takes Regal down with a spinning head-scissors but is slammed down grabbing a side headlock. Whip and Crash surprises Regal with a victory roll for two. Regal drops him with an elbow and hooks a Cobra Clutch. Crash counters a forearm with a back-slide for two. Small package for two. Rolling school-boy for two. He plants Regal with a slam and comes off the top with a missile dropkick for two. Regal nails him coming off the ropes with a knee to the face and hits a rolling senton before finishing with the Regal Stretch (modified STF) at 2:50. Suddenly, NAKED MIDEON runs into the ring and freaks Regal out. Crash adds to the insult, knocking him out of the ring with a dropkick. Good for a sub-3 minute match.

- Steve Austin is backstage with DISTURBED.

It's easy to forget the title was still around. The same title that went into exile for a year under Gillberg's reign. Cole says Malenko wants to be known as "The James Bond of the WWF." Give me a break… Malenko comes to the ring with two "hoochies" (Tazz's words). Malenko goes for a waist-lock and brings TAKA down with a hip toss. He goes for the arm and rolls into a cross arm bar, but TAKA escapes and grabs a side headlock. Whip to the ropes and TAKA with a shoulder tackle, followed by a dropkick that sends Malenko to the floor. TAKA follows, coming off the apron with a double axe-handle. Back inside, TAKA with chops to the throat, snap mare, and kick to the back of the head. He connects with a basement dropkick and puts the boots to Malenko in the corner. Whip to the corner and TAKA with a flying body press for two. Malenko blocks a whip with a knee to the midsection, then presses him in the air for a crash landing. Tazz keeps making bad jokes at Austin's expense. TAKA with a small package for two. Whip to the corner and Malenko with a clothesline, followed by a snap suplex and cradle for three to retain at 2:20. That was abrupt. Again, as good as you're getting for a match with so little time. They're selling it like an injury to TAKA's shoulder on the press drop.

- Lillian Garcia is backstage to get words from Road Dogg, who will be challenging for the Intercontinental Title later in the show.

- Steve Austin is still hanging out with Disturbed.

Chyna is absent, doing a promotional tour for her spread in Playboy Magazine. Not to speak ill of the dead, but a lot of people were curious to see it because we all thought she was a dude. I know, teenagers are stupid, I know. Does anyone honestly remember Road Dogg is a former Intercontinental Champion? Eddie with a shove and Road Dogg throws a series of right hands. Whip and a clothesline, sending Eddie out of the ring. Road Dogg follows and sends Guerrero into the steps. Back inside, Road Dogg puts the boots to Eddie in the corner. Eddie fires back but Road Dogg turns it back in his favor with more right hands. Eddie asks for a truce but gets pulled into a clothesline. Eddie with a cheap shot in the corner, followed by a snap mare and boot across the face. Guerrero with a slam and slingshot senton for two. Road Dogg ducks a clothesline and hits the signature jabs and shake rattle ‘n' roll knee drop. He signals for the Pump-Handle Slam, but Eddie escapes and takes out the knee with a basement dropkick. Whip is reversed and Road Dogg with a powerslam, but Eddie rolls through and hooks the rope with his legs for three to retain at 2:54. The weakest of the matches so far, but watchable.

- Kevin Kelly is backstage with Steven Richards. God, I've successfully blocked "Right to Censor" out of my head for most of the last TWENTY YEARS. Richards cuts a heel promo on MTV and their smut television.

- The WWF Boot of the Week, brought to us by Lugz, is Steve Austin going crazy and giving Stunners to X-Pac, Al Snow, and referee Mike Chioda on the recent episode of Smackdown.

- Steve Austin introduces us to Disturbed for a second performance, this time their cover of Austin's theme song.

Tables Match: The Dudley Boyz vs. Right to Censor:

The Goodfather and Bull Buchanon are representing the RTC tonight. Only one man from the team has to go through a table for a winner to be declared. Tazz is nearly intolerable on commentary. Bubba Ray and Goodfather start. Lockup and Goodfather with a knee to the midsection, followed by right hands. Whip and Goodfather with a shoulder tackle, followed by a clothesline. Bubba Ray avoids the leg drop and throws rights. Whip to the corner and Bubba charges in with an avalanche. He takes the Goodfather over with a suplex and D'Von comes off the ropes with a leg drop. Whip and D'Von with the spinning back elbow. Bull comes in and pounds away. Whip is reversed and Bull hits a diving shoulder tackle. D'Von avoids a charge to the corner and throws more right hands. Bull pulls himself to the top rope (skin the cat style) and comes off the ropes with a double axe-handle. Whip and D'Von comes back with a diving forearm. He goes for a cover and Goodfather saves despite this being a TABLES MATCH. Bull with a boot to the midsection and scissors kick to take out D'Von. Bubba avoids an avalanche from both men, slams the Goodfather, and D'Von comes off the top for the WASSUP HEADBUTT TO THE GROIN. Slam to Bull and we get an encore performance. D'VON… GET THE TABLES. Goodfather saves Bull, then Bubba saves D'Von. Goodfather gets dumped out of the ring and a 3D puts Bull through the table for the victory at 5:07. Post-match, Val Venis and Steven Richards run down for a beat-down on the Dudley Boyz. Good action, and wow, the babyfaces WON their specialty match.

- Steve Austin finds his way to Michael Cole and Tazz. He brings attention to the jokes Tazz has been cracking all night and lays into Tazz with rights before throwing him over the balcony into the unknown abyss. Good to see they paid that off before the show was over.

Final Thoughts: We're still in the era of super-quick matches, and thankfully most of the talent involved could go at a quick pace and not trip over their boot laces at the same time. The presentation came off OK, with them going all in by putting Steve Austin there and having a band perform several songs for the live audience. None of the matches were part of an important angle, though you could argue the Dudley Boyz had problems with RTC (along with most of the mid-card babyfaces). This was a fun show to look back on, though the grating commentary from Tazz became a distraction at times.