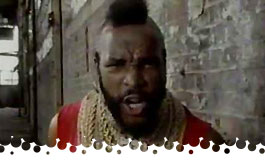 I've avoided covering this release, since it's mostly a highlights video that covers a ton of different stuff from the early-mid 80's, but for the sake of completing the Coliseum Video library as best I can, I might as well give it a look. "Mean" Gene Okerlund is our host from the WWF control room. Okerlund notes there have been 32 cassettes released by the WWF and Coliseum Video, including the Best of the WWF Series that runs through Volume 9, several WrestleMania's, and tapes dedicated to the stars like Hulk Hogan and the British Bulldogs. What we will see is the highlights and LOWLIGHTS from all those releases. Okerlund honestly said lowlights.

Opening the tape is Dynamite Kid vs Nikolai Volkoff from the Wrestling Classic. Volkoff does the usual routine of singing the Soviet Anthem, and when he's finished, Dynamite surprises him with a missile dropkick and pins him in 8-seconds. I don't know if this is here because it makes Dynamite look good or makes Volkoff look like a goof.

Highlights of Tito Santana defeating Greg Valentine inside a steel cage for his second and final reign as Intercontinental Champion. Post-match, Valentine smashes the belt repeatedly against the cage to destroy it, leaving Santana to pose with the battered piece of hardware (which symbolically coincides with their feud, I suppose).

King Kong Bundy squashing Special Delivery Jones from WrestleMania. I find it laughable that WE JUST SAW DYNAMITE WIN A MATCH IN 8-SECONDS, and they are still going with this being 9-seconds when anyone with half-a-brain can tell it was north of the 20-second mark, even if you try and justify when to start the timer. This was an impressive squash to introduce Bundy to the WWF audience.

Roddy Piper invades the set of the A-Team to taunt Mr. T. Piper mocks Mr. T for having a chair with his name on it. T says Piper fights nobody but wimps. Piper says the only wimp he can think of his Cyndi Lauper's manager, David Wolff. Mr. T isn't impressed that Piper can punch up on a lady. Piper makes fun of T's haircut and asks how he can be a role model to today's children when you look the way Mr. T does. Not the strongest representation of Piper's antics, honestly.

Highlights of "Spider Lady" defeating Wendi Richter for the Women's Title and unmasking to be the Fabulous Moolah. To repeat a story told several times already, Richter snubbed a contract that was shoved in her face before going to the ring, so the agents and Moolah went into business for themselves, and Moolah pinned Richter despite Richter kicking out at one. The part of the story that never made sense is that Richter didn't know it was Moolah, because that would be ridiculous to accept considering her work style and build gives it away, let alone this was years before the "hide them in a truck before the match" idea was implemented. Some called this the original screw job, but that kind of stuff happened all the time throughout the 20th century. Still, a historically significant moment, and Richter's last appearance for the WWF for nearly 25 years.

From TNT, Fred Blassie and Friday come out with a caged chicken before bringing out Kamala. Blassie says the chicken is a performer, and it's time for it to do a disappearing act, and Kamala is going to eat it alive. When we come back from commercial, we see Kamala's mouth is covered in feathers, and he shoots the camera a look like "you know what I did." Dumb, but short.

It wouldn't be mid 80's WWF without some midget madness! We see highlights of a match between the Haiti Kid and Danny Carpenter, with a referee who isn't much taller than them. In fact, he might be shorter than Carpenter, though it might have to do with the fluffy hair. We get the usual midget match spots, and its watchable stuff.

Time for some "controversial title changes!" Hey, that's how Okerlund advertised the next batch of highlights. First, the Iron Sheik defeats Bob Backlund for the WWF Title when Arnold Skaaland throws in the towel. Mr. Fuji and Mr. Saito defeat Rick Martel and Tony Garea for the Tag Titles thanks to Fuji throwing salt in the eyes of Martel. Tony Atlas and Rocky Johnson win the Tag Titles from the Wild Samoans when Lou Albano accidentally brains one of his own men with a wooden chair. Iron Sheik and Nikolai Volkoff defeat Mike Rotundo and Barry Windham for the Tag Titles at WrestleMania when Blassie's cane is broken across the back of Windham. Randy Savage steals the Intercontinental Title from Tito Santana by blasting him in the face with a foreign object (and hello to Danny Davis in beige khakis as the referee).

Highlights of Terry and Hoss Funk vs Junkyard Dog and Tito Santana from WrestleMania 2. They highlight Terry using the megaphone to KO JYD for the victory. This didn't need to be here.

Ivan Putski and Jesse Ventura compete in an arm-wrestling match. No lies, that might be my least favorite booking trope when you've got two men fighting over who is the strongest. Ventura examines the chairs and table to make sure there's no funny business. Putski has the advantage, forcing Ventura to cheat by grabbing the table when the referee isn't looking. He finally gives up on it, dragging Putski over the table and repeatedly bashing him across the back with a chair.

Andre the Giant easily manhandles three men at once. Watching an agile Andre is something to behold if you're only familiar with his later years when he was only able to perform in limited circumstances and relied heavily on holding the ropes to keep his balance.

Time for a showcase on everyone's favorite voice of their childhood (assuming you're an old fart like me). Highlights of a match between Bruno Sammartino and Superstar Billy Graham, with Gorilla Monsoon as the special referee. Graham tries taking a walk, so Monsoon carries him to the ring and throws him back in with a fireman's carry. We follow with Monsoon in action. BOXING ACTION, against Andre the Giant in Roberto Clemente Stadium. Next, the famous confrontation between Monsoon and Muhammad Ali, where Monsoon gives him an airplane spin, then cuts a promo about Ali not knowing a thing about wrestling.

From January 23, 1984, Hulk Hogan defeats the Iron Sheik for the WWF Heavyweight Championship, officially kicking off Hulkamania in the WWF and ushering in the golden era that everyone still looks back on fondly today. This match was recycled so many times for so many different home-video releases, and I'll never argue against it.

Sticking with Hulk Hogan, we see highlights of him teaming with MEAN GENE OKERLUND against George Steele and Mr. Fuji in Minnesota, probably an attempt to stick it to Verne Gagne. Unfortunately, we didn't get the workout vignettes that went along with this match.

The Killer Bees do their masked confusion gimmick to defeat Hoss and Jimmy Jack Funk in Toronto at Exhibition Stadium in front of 70,000 people. The show would later be titled The Big Event and saw its own release via Coliseum Video. No, this didn't need to be here either, or at least not this match as the highlight selling the show.

Highlights of a Battle Royal from the Philadelphia Spectrum. The match comes down to Tony Atlas and Special Delivery Jones. They decide amongst themselves to settle things under friendly terms. Atlas wins the coin flip and gently puts Jones over the top rope to secure the victory. Kind of dumb, but a unique finish I don't recall seeing ever before or ever again. We cut to the closing moments of WrestleMania 2 with Andre the Giant disposing of the Hart Foundation to win the match. Also, look for William "The Refrigerator" Perry in there amongst the NFL representatives. We get one more Battle Royal, and this one has a great finish, where Jimmy Hart, who spent the match under the ring, and emerged at the end when it came down to JYD and Valentine, and both men took each other over the top, leaving Hart as the winner.

Highlights of Andre the Giant destroying Killer Khan in a Mongolian Stretcher Match. Earlier in the year, Andre broke his ankle getting out of bed one morning, and to cover up his injury, the WWF gave Khan the storyline credit, leading to this annihilation. You want more Andre? Watch him slam Big John Studd at WrestleMania.

We cut to an old interview being conducted by Vince McMahon, standing by with the Grand Wizard of Wrestling and Luke Graham. There's nothing special to this one, just Grand Wizard putting himself over and making fun of McMahon for paying for his own trophy as an announcer of the year.

Bobby Heenan and Capt. Lou Albano were neck-and-neck for the manager of the year award util Hillbilly Jim puts Albano over the top to win the award. Heenan attacks Albano from behind with the trophy. He smashes the trophy to pieces while Big John Studd and King Kong Bundy work Jim over.

Wrapping up the tape, Superfly Jimmy Snuka may have lost a Steel Cage Match to the Magnificent Muraco with the Intercontinental Title, but people only remember what happened after the match, when Snuka leapt off the top of the cage to crash onto Muraco with his signature Superfly Splash.

Final Thoughts: If you're cool with a bunch of short clips, then I can't find much to complain about. There's a couple of highlights I wouldn't have bothered with, but for the most part, it hits some high notes and gives us some great memorable moments in an unorganized, but totally reasonable package. This reminds me of old NFL videos where you'd see 30-60 minutes of exciting plays, boneheaded moments, and an injury or two, and there's nothing wrong with that (minus marketing injuries for profit). Not a must-see, but good for background noise at least.