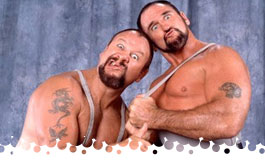 - Here we go with one from the "Collector’s Series" releases (budget titles generally available at a reduced price through magazine offers), running 60-minutes and featuring lots of recycled content. Every match and/or segment featured will be judged on the same scale as always, and the final recommendation will be based on the original price point. The opening montage doesn’t give me any hope. Sean Mooney and Lord Alfred Hayes are hosting via blue-screen.

Oh God, JUST KILL ME NOW. Taped on April 4th, 1990 from Glens Falls, NY and featured on the April 30th episode of Prime Time Wrestling. Stalling to start (surprised?). Volkoff protests the presence of the 2x4, as if he has any pull with the referee. Lockup goes nowhere (like this match). Zhukov with clubbering in the ropes. Whip is reversed and Duggan hits a clothesline, sending Zhukov out of the ring for more stalling. Duggan goes for a headbutt but ends up hurting himself. I didn’t know Boris was Samoan. Duggan fights out of a chin-lock, but an eye rake slows him down. Whip to the ropes and Boris grabs a bear-hug. Duggan makes the comeback with the usual punches and clotheslines. Volkoff tosses the 2x4 in, but Duggan intercepts it and whacks Zhukov behind the referee’s back for the victory at 5:43. Completely nothing match. Zhukov was worse than Dino Bravo. ZERO STARS (0 for 1)

Taped on May 14th, 1990 from Madison, WI and featured on the June 11th episode of Prime Time Wrestling. Garvin wastes little time tossing his towel to the crowd. Lockup to the ropes and a clean break. Haku offers a handshake, but Garvin won’t accept it. They get into a shoving match in the corner. Garvin with a knee to the butt and finger to the eyes. He goes for a headbutt and hurts himself. They trade blows until Haku goes to the eyes. Garvin stomps the bare feet of Haku and pounds away in the corner. Those are hands of STONE! Haku counters with an inverted atomic drop. They trade blows again, with Garvin getting the upper hand. He slams Haku face-first to the canvas for two. They trade vicious chops. Haku rakes the back, so Garvin bites his nose. Heenan with a distraction, allowing Haku to choke. Garvin gets tossed out of the ring. Haku follows and rams him into the side of the ring. He meets the post on a charge, and they trade blows again, all while the bell rings at 6:00, and it’s ruled a Double Count-Out. Watchable, but a lame finish between two guys low on the depth chart isn’t ideal. *1/2 (1 for 2)

The Bushwhackers vs. The Powers of Pain (w/ Mr. Fuji):

Taped on October 8th, 1989 from the Maple Leaf Gardens in Toronto, Ontario. This was also featured on the original "Supertape". Barbarian attacks Butch before the bell and chokes, but Luke bites the posterior, allowing Butch to slap on a headlock. The shoulder tackle spot allows Barbarian to show off his muscles. We get some stalling, then Butch grabs another headlock, with the same end result. The Bushwhackers with some school yard tactics, then more stalling. Warlord and Luke tag in to really get things going. Luke with rights to the midsection, but Warlord no-sells. Surprised? Irish whip, and Warlord with a bearhug. Luke escapes with biting., but Warlord goes back to the hold. Warlord puts Butch down with a clothesline, then stomps Butch out of the ring. This gives Fuji a chance to earn his paycheck for the night. Barbarian scoops Butch up and rams him into the ring post. Butch humps the air to get himself motivated, then runs into the arms of the Warlord. Moron. Barbarian tags in and nails Butch with a running boot, then does the same to Luke. I think I heard a minor pop for that. The Powers with a London Bridge on Butch, and this is just dragging. Barbarian with a scoop slam, and Warlord with an elbow drop. Barbarian with a headbutt to the lower-back, followed by a slam. Guess what Barbarian does next? If you said miss his second rope elbow, then you get to keep reading about this match. Butch gets the "hot" tag, or it is Luke, I don't care anymore. They hit the battering ram on Barbarian, then do it to Warlord. Fuji's cane becomes involved, and the Bushwhackers win by Disqualification at 9:10. What a pile of crap. I wish I could take a point away; this was so bad. -* (1 for 3)

Taped on August 30th, 1989 from Portland, ME, featured on the September 25th episode of Prime Time Wrestling, and featured on the 2nd Supertape. JESUS. MAXIMUM RECYCLING HERE. Tony Schiavone and Lord Alfred Hayes call the action, surprising since Schiavone was already back with WCW by the time this tape was released. Lockup, and Akeem rakes the eyes and pounds away. Whip to the corner is reversed, and Hercules nails a clothesline. Hercules with mounted punches, and Akeem staggers out of the ring. Hercules takes a shot at Slick, who gets miffed and "attempts" to get in the ring but gets held back by Akeem. Back inside, and they do a mock boxing match, or something. Is this supposed to be entertaining, funny, either, or neither? Irish whip, and more punching. Hercules goes for a slam, but Akeem blocks it. Slick with a length of wire/tape and chokes Hercules with it. Whip to the corner, and Akeem misses a charge attempt. Hercules with MORE punching, then rams Akeem to the buckle a bunch-o-times. Irish whip, and Hercules with a running knee lift, followed by a pair of clotheslines. Slick pulls the top rope down on Hercules, drawing the Disqualification at 5:11. Well, that as utterly pointless. afterwards, Hercules avoids a splash, then slams the massive Akeem. Match blew, but it was short. ¼* (1 for 4)

Taped on December 14th, 1989 from the Copps Coliseum and featured on the January 8th, 1990 episode of Prime Time Wrestling. No Jimmy Hart in Bravo’s corner. Main Event in any arena in the world, at least in the eyes of Gorilla Monsoon. Dino’s in the middle of a short-term program with the Warrior over the IC Title at this point, so I’m going to assume Tito’s jobbing. Monsoon can’t resist referencing Bravo being the former "Canadian Heavyweight Champion." They play the crowd to start, then Bravo stalls on the floor. Bravo with knees to the midsection. Whip to the ropes, Tito ducks under a clothesline and comes back with a body press. He takes Bravo over with a hip toss, then sends him to the floor with a dropkick. Back inside, Santana goes to work on the arm. Bravo forces a break in the corner and takes control following an inverted atomic drop. He grabs a chin-lock as I realize the referee is John Bonello, who a few months later would be arrested for trying to put a hit on his wife. Santana comes back with a back-slide, but Bravo regains control with a lazy bear-hug. Bravo with a slam, but a trip to the top rope is met with a fist to the midsection. Whip to the ropes, Santana with a back body-drop. He sets up for the Flying Forearm, but its countered with the Side Suplex, and Bravo covers for the three count at 11:18. Mostly resting. Santana could be a miracle worker to some degree, but when someone is just not budging on making any kind of an effort, you’re screwed. ½* (1 for 5)

Final Thoughts: Wow, this tape sucked. The recycled footage wouldn’t bother me if most of it didn’t suck (and two of the matches were already released on Coliseum Video that year). Not even worth skimming through, the best match is a generous score, and not worth searching through the Network archives or finding an original copy of on eBay.