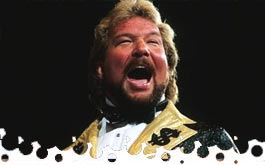 Hosted by "Mean" Gene Okerlund from the WWF control room. I was going to fire off some modern-era jokes about embarrassing moments, but I'll keep things under control as I suffer through the 1987 edition of what the WWF production staff thought was hilarious. Okerlund calls it over an hour of bloopers and body slams, involving not just the WWF Superstars, but even the announcers. This segues to Okerlund talking about how impeccable he is, and he never makes mistakes, which leads us to a weak blooper of him going blank while putting over Koko B. Ware, causing Lord Alfred to lose it. Meh. Google Okerlund bloopers for some real gems.

The first segment centers around the Million Dollar Man, Ted Dibiase. He's scheduled to wrestle an enhancement talent named Chris Curtis, but chooses the match isn't worth his time, and hires some other goof to do his work for him, Mr. Arthur Washington. What follows is a rare (and terrible) match between enhancement geeks on syndicated television, with Curtis easily defeating the man hired to do Dibiase's work. Dibiase, upset with the result, teaches Washington a lesson before having Virgil retrieve the money from his trunks. Lesson of the day: You don't do the job right; you don't get paid.

More bloopers of Okerlund and Lord Alfred stumbling over their lines and cheesing for the camera.

Highlights of Jesse Ventura squashing Steve Lombardi (babyface Lombardi? GET THE HELL OUT OF HERE WITH THAT). We cut to footage of Ventura on the set of TNT. He's wearing some ridiculous gear, but the real eyecatcher is the makeup he applied to the cleft of his chin. He annoys Vince and Alfred by calling them both Jack, then after Hayes makes fun of his hat, Ventura suggests he has herpes. I'm embarrassed for myself just watching this.

Hulk Hogan beats up on Randy Savage while wearing Savage's sunglasses. No, I'm not kidding. In what I'm sure was a great match, we got about 75-seconds of Hulk screwing around. EMBARRASSING MOMENTS.

From TNT, Vince McMahon interviews a woman in full witch gear. We don't waste time getting to the point, as she starts whacking Lord Alfred with her broom. Need more TNT and more Lord Alfred being embarrassed? WE'VE GOT HULK HOGAN'S PYTHON POWDER, DADDY. Yes, this segment has seen light on about 67 different video collections over the years. Hogan makes a protein shake that makes Awful Alfred want to vomit.

We move on from shaming Lord Alfred Hayes to highlight moments where guest referees would get physically involved in a match, like the time Gorilla Monsoon had to carry Superstar Billy Graham back to the ring in his match with Bruno Sammartino, and Swede Hanson assaulting the Magnificent Muraco, setting him up for defeat against Rocky Johnson.

Highlights of Hulk Hogan and GENE OKERLUND versus George Steele and Mr. Fuji. This tape is starting to feel like a rehash of the "Grand Slams" tape released by Coliseum Video the prior year.

Outtakes of Vince McMahon's introduction for the Best of the WWF Vol. 1. I'm surprised they let the "g*d damn" go by without a bleep or something.

Gene Okerlund interviews Terry Funk and Jimmy Hart. We don't hear any of the promo, but we do get the classy shot of Funk spitting tobacco at the camera. We cut to one of Funk's earliest appearances on Championship Wrestling, physically assaulting ring attendant Mel Phillips. We jump to another bit with Funk, this time wrestling the Junkyard Dog on an episode of Saturday Night's Main Event, with the big laugh being JYD going after Jimmy Hart and ripping his pants off, leaving him running around in his red underpants.

Ted Dibiase pays off a hotel receptionist to give him the best suite and kick out the honeymoon couple. WHAT A HEEL. This tape is all over the place when it comes to formatting. Dibiase says he's doing them a favor, since they'll be wanting separate rooms eventually anyway. This cuts to a pre-match bit from Lanny Poffo reading a less-than-flattering poem to Dibiase before getting squashed (the match itself isn't shown).

Andre the Giant unmasks the Black Demon (the one wearing blue tights and pink boots). I'm only halfway through this tape and I'm already on the verge of tapping out.

Randy Savage and Adrian Adonis (leaning heavily into being a drag queen at this point) attack Hulk Hogan, but the Hulkster fights them off and rips Adonis' dress off, revealing he's wearing a stuffed bra. I wish I was making this up.

Next, we're on the set of TNT with Paul Orndorff and Bobby Heenan as the guests. Vince throws it to highlights of WrestleMania, where Orndorff took the fall thanks to a miscommunication from Bob Orton. Heenan talks about strategizing with Roddy Piper that morning (without Orndorff) and that leads to Orndorff accusing Heenan of intentionally leaving him out of the loop. They bicker back-and-forth until Orndorff has enough and fires Heenan on the spot. WAIT... the gag isn't over. We cut ahead to the Summer of 1987, and Orndorff is again under the tutelage of Heenan. He can't stop gushing over the physique of "Ravishing" Rick Rude, even telling Orndorff that Rude's is the best in the Heenan Family. Orndorff can't stand being second best and fires Heenan AGAIN.

Gene Okerlund introduces us to what might be the most embarrassing wrestling match, pitting George "The Animal" Steele against the King of Wrestling, Harley Race. This match is lifted from the Boston Garden. OH GOD, PETE DOHERTY IS ON COMMENTARY. It's the typical shtick you expect from a match with babyface George Steele, and of course there's not going to be a clean finish. I'm sorry to disappoint anyone expecting a detailed recap of the match, but this tape isn't what that's all about.

The Dynamite Kid pins Nikolai Volkoff in 8-seconds at the Wrestling Classic. MILK THIS MOMENT FOR EVERY PENNY! Volkoff is the center of attention for the next embarrassing moment, too. Slick (standing by with Volkoff) is convinced he's won the rights to Bam Bam Bigelow by process of elimination, but Bigelow turns him down by introducing the WWF audience to Sir Oliver Humperdink (AS A BABYFACE?!) and then punks out Volkoff to cap it off (Bigelow pinning Volkoff in his Superstars debut isn't featured, either).

Roddy Piper hosts an edition of Piper's Pit at Madison Square Garden. He has two fans in the ring for him to humiliate. He talks down to a woman who thinks Paul Orndorff is cute, then slaps around a guy who likes Hulk Hogan. This brings out Bruno Sammartino, who refuses to do the interview until Piper does something with "this piece of garbage" (Orton). Bruno tells Piper to have the courage of being a man to face him one-on-one, otherwise he can get a friend of his to watch his back. Orton is dismissed and Piper sarcastically asks Bruno if he's a happy person. Piper can't help himself, accusing Bruno of having terrible breath. Bruno says they call him the living legend because he would punch people like Piper in the mouth. Piper won't back down, and Bruno says he can squash him like a grape. Piper calls him a "stupid wop" and gets shoved backwards, a$$ over teakettle with a chair. Piper grabs the chair and attacks Bruno, and the crowd litters the ring with trash. Bruno somehow makes his own comeback, sending Piper running before he can give him a proper receipt. We cut to highlights of a tag match featuring Bruno and Orndorff against Piper and Orton.

Closing moments of the Dream Team vs. Rougeau Brothers from WrestleMania III. Beefcake is left in the cold, but we don't see him solidify his babyface turn because Adrian Adonis was fired a few weeks after the PPV. We cut to footage of Superstars, where Beefcake puts Johnny Valiant out with a sleeper and shows off his newfound barber skills.

Highlights from the 1986 Slammy Awards. Monsoon has his fly open, Piper cuts a scathing promo when his trophy falls apart, and Volkoff wins an award for being a terrible singer. We've seen this a few times on home video, just like half of the rest of this tape.

Ted Dibiase pays a little kid to dribble a basketball 15 times and kicks the ball away when the kid reaches 14. This is the most memorable segment of Dibiase's "humiliate the audience" segments. It wasn't the first time he picked on kids, but the first time he interfered in their task because they were on the verge of succeeding.

Blooper from the 4-year anniversary of Gene Okerlund as host of All-American Wrestling. They try to do the "Cake in the face" bit, but the woman misses the target, mostly hitting Okerlund on the chin and chest with it. THIS was the segment to wrap up the tape.

Final Thoughts: Just a forgettable collection of highlights that we've seen before from Coliseum Video. The only new content is the stuff from the Spring and Summer of 1987, so if you're desperately looking for Ted Dibiase vignettes, then I guess that's a reason to check this one out. If not, one of the easiest recommendations I can give to avoid wasting 84-minutes.