Coliseum Video Presents: The Undertaker: He Buries Them Alive! 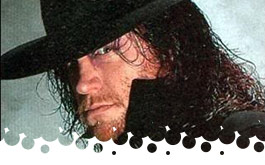 The Million Dollar Man, Ted Dibiase, is our host for this budget-title video. I remember sometime in the mid 2000's, WWE would occasionally release an old home video on DVD, stuff like this, a budget Shawn Michaels title, and the budget "Best of WrestleMania I-IX" video to name a few. If you're going to bother putting out some old videos you produced under the Coliseum Video banner, WHY THOSE RANDOM TITLES?! This is the second "budget" title dedicated to the Undertaker in 1994, for those keeping track.

Yes, we're opening the video with this anti-classic from SummerSlam 1994 (Happy 9th Birthday to me, by the way. Yes, I'm always going to shill for my birthday shows). Paul Bearer's Undertaker gets his entire entrance, which eats up 6-minutes of a 53-minute tape. Bearer and Dibiase do their best to mirror each other's removing of their Undertaker's entrance gear, and I guess points for the effort. They do the face-to-face and Paul Bearer's Undertaker is clearly taller. They trade blows and the crowd IS F'N DEAD. Crisscross and Taker with a big boot, knocking Taker out of the ring. Taker tries to stalk Paul Bearer, but Taker saves, pulling Taker to the apron and bringing him into the ring with a suplex. All the clean shots of Brian Lee's face expose just how much he doesn't look like Mark Callaway. Taker steals a play from Taker's book and hangs him up across the top rope. Taker tries the rope-walk clothesline but Taker counters, throwing him to the canvas. Taker shows him how it's done, and even that barely pops this Chicago crowd. Whip is reversed and Taker gives Taker the world's worst Hot Shot. Taker throws a pair of clotheslines and comes off the ropes to miss an elbow drop. You can tell Taker is trying to work but working within the confines of your gimmick against a guy poorly cosplaying as you will be a failure no matter how hard you try. We're almost 30-years since this match and it's still astonishing someone thought this was a good idea. Taker with a chokeslam, but Taker sits up. Tombstone Piledriver connects and Taker again sits up. Taker counters a second try and proceeds to plant Taker with THREE Tombstone Piledrivers to put this stupid storyline to rest at 9:10. Awful match. ABSOLUTELY AWFUL. -***

Taped on August 15th from Lowell, MA, and featured on the September 12th episode of Raw. Yes, TAPED BEFORE SUMMERSLAM. No way you get away with that even 5 years later. Kwang moves in for the attack, but Taker cuts him off with a boot to the chest. Whip to the ropes and Kwang with a chop to the back. Taker no-sells and plants Kwang with a slam. Kwang avoids the elbow drop and knocks Taker through the ropes with a Super-Kick. Kwang shows off the red mist and makes the mistake of trying to attack Taker on the apron. If you couldn't guess the spot, Taker hangs him up across the top rope. Back inside, Taker goes to the arm and hits the rope-walk clothesline. Whip and Kwang rolls under the diving lariat. We come back from the commercial break edit with Kwang working Taker over with right hands. Taker fires back with right thrusts. Whip to the corner and Taker meets the boot. Kwang follows with a clothesline, knocking Taker to the floor. He lands on his feet and goozles Kwang from the apron. Kwang spits the green mist, but Taker no-sells, spit it back at him, and finishes with the chokeslam at 5:16 (shown). This looked like a Match of the Year contender compared to the last match. ** Casket Match: The Undertaker (w/ Paul Bearer) vs. Yokozuna (w/ Mr. Fuji & Jim Cornette): From the 1994 Survivor Series, and thankfully we edit out most of the entrances since almost 20-minutes of this tape was dedicated to that SummerSlam sh*t-show. Even in late 1994, Monsoon still does the "do you smell formaldehyde" comment. Chuck Norris is the special ringside enforcer to prevent the same BS that happened at the Rumble. Taker slashes his throat and points to the casket, causing Yoko to crap his pants in fear. Yoko tries to leave the ring, but Taker cuts him off. Yoko gets knocked through the ropes, landing on the casket for another freak-out. Back inside, Taker wraps up the arm and hits the rope-walk clothesline across the back. Crisscross and Yoko catches Taker with a Samoan drop. Taker sits up, so Yoko runs him over with a clothesline. Taker blocks being rolled into the casket and hangs Yoko up across the top rope. Taker misses the jumping elbow drop and Yoko plants him with a uranage. Neither Vince nor Gorilla knows what to call it. Taker is put in the casket, but he stops the lid from coming down and pulls Yoko in with him for a slugfest. Fuji grabs Taker's hair to divert his attention, allowing Yoko to climb out of the casket. Cornette waddles over and takes a bump while Yoko attempts to catch his breath. We suddenly cut ahead to King Kong Bundy coming to the ring, teasing an altercation with Norris. Bam Bam Bigelow is right behind him, and it proves to be a distraction to allow I.R.S. to jump Taker from the crowd and put him down with a sleeper. Taker stops the lid from closing, grabbing a choke. Double J comes out and he's man enough to take a bump for Chuck Norris. Meanwhile, Taker lays into Yoko with right uppercuts. Whip and Taker with the diving lariat, followed by a DDT. He rolls Yoko into the casket, tosses in the Japanese flag with him, and shuts the lid to finally wrap this angle at 12:05 (shown). This wasn't an overbooked mess like the Rumble, so it's just a so-so gimmick match with a little bit of gaga. *½

Taped on October 18th from Burlington, VT, and featured on the November 19th episode of Superstars. I thought we were going in chronological order, but this breaks that theory. Neidhart hides at ringside, so Taker chases him into the ring. Neidhart tries getting the jump, but Taker shrugs it off and lays Neidhart out with a big boot. He wraps up the arm and hits the rope-walk clothesline across the shoulders. Neidhart ducks under the diving lariat and softly hits Taker with a clothesline of his own. Whip to the ropes and Neidhart with a powerslam. He grabs a choke and THE REFEREE ATTEMPTS TO COUNT A FALL. Paul Bearer leaves ringside to possibly use the bathroom. Neidhart with a suplex for two. Paul Bearer is back, and he's got the casket with him. THE POWER OF THE CASKET WILL HELP UNDERTAKER WIN. Taker pops up after taking a series of elbow drops and starts no-selling Neidhart's strikes. Crisscross and Taker with a diving shoulder tackle. He knocks Neidhart into the casket, causing him to freak out and run away for the cheap count-out at 6:03. You're telling me NEIDHART, IN 1994, CAN'T JOB TO UNDERTAKER? Worthless. ½*

Taped on September 28th from White Plains, NY. This is a genuine exclusive, the one and only match on the tape not featured on TV or PPV. We're joined in progress, because we needed to dedicate time to that last dumpster fire with Jim Neidhart. Lawler plays chicken-sh*t heel, of course. Taker traps Lawler in the corner and sends him crawling out of the ring after one right hand. Lawler makes a move for Paul Bearer, but Taker makes the save. Lawler digs into his tights for the famous imaginary foreign object. Lawler unloads with the loaded right hand and is beaming with confidence. Taker no-sells being rammed into the turnbuckle and Lawler's reaction is priceless. Taker with the goozle, calling for the casket, but Lawler avoids it and continues to demonstrate how to crawl on all fours at top speed. Lawler throws more loaded rights, including a blast from the second rope. That's a high spot in Memphis. Lawler tries to put Taker in the casket, but he can't get the lid closed. Taker blocks the loaded right, so you know Lawler's cooked. Taker plants Lawler with a slam but misses an elbow drop. Lawler goes low, staggering Taker. He tries tossing him over the top rope into the casket, which seems like a weird idea. Taker fights it off, hits the Tombstone, and puts Lawler in the casket at 7:36 (shown). Typical Lawler shtick, which isn't for everyone, but a welcome change after that last turd. *½

Final Thoughts: Unless you're a hardcore Undertaker fan, give this one a pass. Only one exclusive match (which is fine for what it is, but not a lost classic), nearly 1/3 of the run-time dedicated to one of the worst matches of 1994, and a couple of TV matches that range from poor to decent. Even for a collection running only 53-minutes, this one can be skipped over.