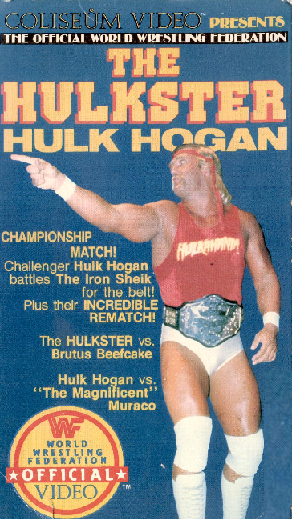 This is the FIRST of the "Collector Series" released by Coliseum Video, tapes that usually ran anywhere from 30 to 60 minutes and usually featured content recycled from the other, larger releases from the company. Vince McMahon is our host, using the word UNUSUAL to describe what we're going to see. Um… what's unusual about a handful of matches featuring your top star? He says at the time of production, Hogan has been the WWF Champion for "over two years", and in that time, Hogan has defended the belt on no less than 25 Occasions (with heavy emphasis on "OH" in that enunciation).

Taped on February 16th, 1985 from the Philadelphia Spectrum. I don't expect much, but I've been surprised before. No entrances shown to avoid "Eye of the Tiger" being played. Hogan attacks as Beefcake disrobes and sends him into the corner with an atomic drop. Lockup and BEEFCAKE sends Hogan into the corner in the test-of-strength. Beefcake struts to avoid another lockup. Hogan mocks him afterwards and unloads with some goofy strikes, complete with ridiculous selling. Whip to the corner and Hogan follows with an elbow. Whip and Hogan with the clothesline (AXE-BOMBER!), followed by an elbow drop. Beefcake takes control with rights and comes off the ropes with a double axe-handle. Hogan blocks being sent to the corner and gives Beefcake a taste of the turnbuckle. He plants Beefcake with a slam and drops two elbows. Whip is reversed and Beefcake hits a clothesline in the corner. Beefcake with a power-slam for two. He drops a series of forearms across the chest for two and its HULK-UP TIME™. Hogan with rights, a big boot, and slam. Hogan comes off the ropes with a leg drop, but Valiant hops on the apron for a distraction. Beefcake with a high knee, but it only gets two with Hogan's leg out of the ring. Beefcake celebrates prematurely and Hogan rolls him up for three at 9:45. Really, a ROLL-UP? The usual basic stuff from Beefcake, with a hot crowd thanks to Hulk. *½ (0 for 1)

Taped on January 23rd, 1984 from Madison Square Garden. You know the match. They mute the entrance music for obvious reasons and add new commentary to fill the void. Hogan attacks at the bell, with Sheik still wearing his robe. Whip to the corner and Hogan follows with an elbow. He sends Sheik to the ropes and clotheslines him with the robe. Hogan with rights. Whip to the ropes and he hits the big clothesline, followed by a knee drop across the chest. The crowd is rabid for every single move. Hogan with a big boot, but it only gets two. Hogan with a running elbow and an elbow drop for another two count. A charge to the corner meets nothing but turnbuckle, allowing the Sheik to finally get some offense. Sheik with a back breaker for two. Sheik puts the boots to him and turns over with a Boston Crab, but Hogan powers out. Sheik with a gut-wrench suplex into a cover for two. He quickly slaps on the Camel Clutch, but Hogan fights to his feet and rams Sheik hard into the corner. Hogan quickly comes off the ropes with the leg drop, and we have a NEW WWF Champion at 5:37! Hulkamania is here! The nuclear reactions from the moment the match was introduced to Hogan's celebration is something to behold. We get the locker room celebration and interviews to honor the occasion. **1/2 (1 for 2)

Taped on May 5th, 1984 from the Philadelphia Spectrum. Joined in progress, with the Sheik in control and loading up his boot. We cut ahead to Sheiky-Baby literally spitting on the WWF Champion. Hogan blocks a suplex and counters with his own. Hogan is bleeding, but he's getting fired up. Yeah, the HULK-UP routine is still finding the way. He unloads on the Sheik with right hands, including the comical Popeye wind-up punch. Hogan with a slam and the big leg drop, but he chooses not to cover. He goes for the boot, but Sheik fights him off. Hogan makes a second go at it, again unsuccessful. Three times is a charm, and the loaded boot is finally off. Hogan loads it up and chases Sheik out of the ring with it, clocking him across the back of the head. We cut to them in the ring, and now the Sheik is a bloody mess as Hogan hits him again with the boot. A few under-card geeks come out to break things up as we hear the bell at 3:00 (shown of 14+ minutes) of a Double Count-Out. Not enough to get a rating or a point. (1 for 3)

Taped on June 21st, 1985 from Madison Square Garden. When Muraco returned in early '85, he immediately began targeting Hulk Hogan in his promos, so it's nice to see at least one of their matches after covering those episodes of Championship Wrestling and All-Star Wrestling. Hogan enters the cage and tosses the belt at Muraco. Muraco tries whipping Hogan with it but Hogan ducks and lays into him with right hands. Muraco with knees but Hogan blocks being sent into the cage. Hogan tries the same strategy, throwing in a rake of the eyes. Muraco blocks and hits Hogan low. Muraco makes a quick move for the door, unsuccessfully. Muraco pounds away, but Hogan is getting pumped up. He responds with a series of double chops and comes off the ropes with a clothesline. Hogan with a big bite on the forehead of his challenger. He hoists Muraco onto his shoulder and sends him into the cage like a javelin. Muraco is BUSTED OPEN. Hogan scoops him up and does it again. Hogan with more right hands, but Muraco side-steps a clothesline and sends Hogan into the cage. Muraco with a slingshot, sending Hogan into the cage again. Muraco climbs but Hogan blocks and slams him into the top of the cage. We cut ahead to Muraco knocking Hogan down from the top rope. Hogan nails Muraco coming off the ropes with a big boot, trapping Muraco's neck in the ropes in the process. Hogan goes for the door, fights off one last attempt at a block, and exits to retain at 7:37. This was OK, but maybe there was an edit that cut something out that would've pushed it to a different level. ** (1 for 4)

Final Thoughts: While not the worst tape in the world, I can't go out of my way to recommend it. The best match on the tape is literally on 30 other tapes published by Coliseum Home Video, and the rest is fine for padding out other tapes, but not for being the bulk of a tape.