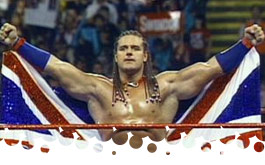 Hosted by Sean Mooney in front of a cheap green screen. I had trouble finding much information on this tape, but it looks like a European exclusive. I'm going to guess this was released in the Fall of 1992, because TheHistoryofWWE.com lists it as October 1993, which would mark the period where Davey Boy was in WCW, and Sean Mooney was long gone from the company. Oh well, not a big deal, it's a 60-minute tape. LET'S GET TO THE ACTION...

The British Bulldog vs. The Warlord (w/ Harvey Wippleman):

From "This Tuesday in Texas", taped on December 3rd, 1991, from San Antonio, TX. It's been a long while since I've recapped that, so here's a fresh look at the match: Lockup and Warlord shoves Bulldog into the corner. Bulldog returns the favor, causing Warlord to take time to have a quick chat with Wippleman. Warlord calls for a test-of-strength and lands a boot to the midsection. Whip to the ropes, Bulldog catches the boot, sweeps Warlord off his feet, and drops down with a headbutt across the midsection. Bulldog with a clothesline, knocking Warlord over the top rope. He follows with a plancha, but Warlord catches him (kind of) and rams his back into the post. Bulldog fights his way in from the apron and comes off the top with a missile dropkick. Warlord gets trapped in the Andre Special, with Bulldog taking some free shots. Wippleman comes to his man's aid, releasing him from the ropes as Bulldog attempts a body press. Warlord with a short whip into the corner before grabbing a bearhug. Bulldog fights free but gets planted with a belly-to-belly suplex. Warlord slows things down, methodically working on the back. Bulldog unwisely attempts a piledriver, then the sunset flip gets blocked. Warlord does the posing celebration and gets cradled for two. Warlord pops right up to hit a clothesline and signals for the full nelson. He grabs the hold, but Monsoon quickly points out he doesn't have the fingers locked. Bulldog fights for a while, so Warlord just gives up on the hold. Whip to the corner, Warlord meets a boot charging in, and Bulldog comes off the middle rope with a clothesline. Bulldog with the delayed vertical suplex for two. Bulldog scoops Warlord up for the powerslam but he grabs the ropes and lands on top of Davey Boy for a near-fall. Whip to the ropes and Bulldog with the crucifix cradle for three at 12:48. Trim this a couple of minutes and it's even better. Still, getting a good match out of the Warlord is still quite the accomplishment. **½

The British Bulldog vs. "The Model" Rick Martel:

Taped on March 10th, 1992, from Biloxi, MS. Local advertisements had this listed as Bulldog vs Earthquake, so I guess we should be happy we might get something better from this. This match can also be found on WrestleFest 1992. Lockup and Martel with a pair of knees to the midsection. Whip to the corner and Martel hot dogs after avoiding a bull(dog) charge. Bulldog hangs on with a side headlock, with Martel loudly complaining of a phantom hair pull. Martel climbs over the top rope to the apron, forcing the break. Bulldog brings Martel back in with a slingshot and goes to work on the left arm. Bulldog blocks a hip toss and continues to punish the arm. Whip and Martel casually sidesteps Bulldog, sending him through the ropes. Back inside, Martel starts to work on the back. Could he be setting up for the Boston Crab? Obviously. Bulldog reverses a whip to the corner but meets a knee charging in. Bulldog comes right back with an atomic drop and clotheslines. Martel powders out, but Bulldog follows. Back inside, Martel sits down on a sunset flip with some assistance from the ropes. The referee sees it, kicks the hands away, and Bulldog finishes with the sunset flip for three at 5:23. This was some minimal effort stuff. *

Taped on February 17th, 1992, from Tampa, FL, and featured on the March 16th episode of Prime-Time Wrestling. Michaels with a side headlock, but a shoulder tackle doesn't budge the Bulldog. Crisscross and Bulldog with a clothesline, sending Michaels for a big bump over the top rope. Another crisscross and Bulldog counters a monkey flip with a headbutt. Michaels can't get Bulldog over with a hip toss and runs into a clothesline. Sherri with a distraction, allowing Shawn to surprise Bulldog with the Super-Kick. Whip to the ropes and Michaels with a back body-drop. Shawn stops to pose before following up with choking. Bulldog escapes a chin-lock but gets thrown through the ropes thanks to a handful of tights. Sherri with another distraction as Michaels comes off the apron with a flying clothesline. Back inside, Shawn comes off the top with a double axe-handle for two. Shawn thumbs the eye and plants Bulldog with a slam. He comes off the second rope with an elbow drop for two. He tries it again, but this time Bulldog pops up and nails him on the way down. Whip to the corner and Bulldog boots him to the floor. Bulldog follows, ramming him into the guardrail. Whip to the ropes, and Bulldog press slams Shawn across the top rope and gives him a ride. Sherri hops on the apron and grabs Bulldog as he hits the ropes, drawing a Disqualification at 7:57. Bulldog teases giving her a Powerslam, but Shawn saves. Good match with a weak finish. ***

Taped on October 5th, 1991, from Barcelona, Spain. Davey Boy has Winston the Bulldog with him too, despite dropping that part of the gimmick months earlier. Earthquake teases going after Andre, but Andre backs him off with his crutch. Bulldog wins the popular vote in their unofficial posing contest. Lockup and Quake with a shove to the corner. Bulldog with a pair of dropkicks, sending Earthquake to the floor. Quake catches him coming off the second rope and slaps on a bear-hug. Bulldog tries to counter with a slam, but Quake falls on top for a near fall. Whip and a sunset flip is unsuccessfully. Did Lord Alfred just claim nobody has ever slammed Earthquake?! More bearhug fun. Quake with a power-slam, but instead of going for the finish, he sets his attention on Andre. The referee stops Andre from using the crutch, allowing Earthquake to kick his knee. Quake manages to botch stepping on and over the Bulldog. Andre recovers, whacks Earthquake with the crutch, and Bulldog finishes with a slam at 8:16. Bad match and possibly Andre's last television (international or in the states) appearance for the WWF. ½*

Taped on April 19th, 1992, from Sheffield, England, and officially listed as "UK Rampage ‘92." I just called the entire tour "European Rampage" and washed my hands of it. Bulldog starts with a side headlock, followed by a shoulder tackle. I.R.S. with a hip toss, but Bulldog mule kicks him away and sends him out of the ring with a clothesline. Back inside, Bulldog works the arm. I.R.S. connects with an enzuigiri and tosses Bulldog out of the ring. He follows, putting the boots to the Bulldog, followed by a pair of elbows. Back inside, and we get the obligatory abdominal stretch, with extra leverage. Bulldog escapes with a hip toss and rolls Irwin up for two. I.R.S. quickly puts him back down with a clothesline, followed by a diving clothesline and leg drop for two. Bulldog comes in from the apron with a sunset flip for two. I.R.S. remains in control and drops the leg for two. Bulldog counters a suplex with his own delated version for two. He goes for a splash but meets the knees. He quickly recovers, using Irwin's tie for unfair leverage. Irwin sends Bulldog into the corner and goes for the briefcase, but Bulldog fights it away and finishes with the Running Powerslam at 12:52. This was fine, despite the slow-paced and outdated offense from I.R.S. **

Final Thoughts: It's one hour of Davey Boy Smith from the Fall of 1991 through Spring of 1992. There are a couple of decent matches and a couple of poor matches. If you are a fan of the era, or a really big fan of Davey Boy, I could think of a worse way to kill 60-minutes, but there is nothing groundbreaking here, and no memorable title wins.