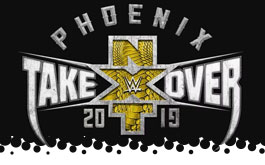 War Raiders get an extra special entrance with a Norse army, ominous music, and battle torches on the video wall. Would it kill WWE to put this kind of effort into main roster pay-per-views? There's this notion that all the stuff that makes NXT awesome "wouldn't translate to the main roster" and it's perplexing to me.

War Raiders get a hot start as they clear the ring and Hanson powerbombs Rowe onto the opposition. Strong halts their momentum by thrusting Hanson into Rowe to knock him from the apron. The UE briefly cut off Hanson, but he powers through a Dragon Sleeper to force a tag to Rowe. Rowe powerbombs Strong into O'Reilly. The UE recover and Hanson completely misses a dive through the ropes for a nasty landing. Rowe is left in a 2 on 1 situation and succumbs to O'Reilly's chop block to the back of the knee. We have a de facto handicap match as the UE make quick tags and pick Rowe apart. Hanson returns and unwittingly distracts the ref while UE double team his partner. Rowe suplexes O'Reilly into Strong on the apron but the UE recover to take Hanson down to prevent a tag. Rowe gets another hope spot by hip tossing O'Reilly into a full flip and hitting a hard knee. Hanson gets the hot tag and just obliterates the UE in a rampage. Crowd pops big for Hanson's cartwheel in the midst of the carnage. The UE weather the storm and the match breaks down with all four men hitting drive by attacks. War Raiders toss O'Reilly into the air for a power slam and Hanson wipes Strong out with a dive, but O'Reilly kicks out at 2 for a red hot near fall. Hanson's flying splash is broken up, and the UE catch with a superplex and diving knee to the neck, but HANSON KICKS OUT! That nearfall earns a standing ovation. Strong's Olympic Slam gets 2 on Hanson as the fans chant "Fight forever." The UE hit Hanson with the High Low, but Hanson kicks out yet again. Hanson cartwheels to escape a double team and hits a double back handspring elbow! Rowe powerbombs both UE members and hoists O'Reilly for a guillotine leg drop and War Raiders are the champions at 17:00! Just a ridiculous stunt show and a fitting end to the UE's stranglehold on the tag belts, ****¼.
Winners and new NXT Tag Team Champions: War Raiders

Ohno initiates a strikefest but Riddle just overwhelms him with a flurry. Riddle lands a knee strike off the ring steps and dead lifts Ohno into an overhead throw in the ring. Ohno blocks a sunset bomb and pulls the ring apron over Riddle's face for a vicious stomp! Ohno leg drops the back of the head and is firmly in control. Ohno shouts "Remember this?" as he thrashes Riddle into the ring post and steps. Riddle is bleeding from the mouth as he shakes off Ohno's stiff offense, but Ohno stomps on his bare foot to block a suplex. Well, I guess there's a reason why 99.9% of wrestlers wear boots. Riddle recovers and hits a German suplex for 2. Riddle connects with a series of kicks to the chest, but Ohno counters by biting his toes! Gross. Ohno's Liger Bomb gets a 2 count, as does a moonsault. Big boot by Ohno and a senton, but Riddle counters a second senton with a rear naked choke. Ohno gets the ropes so Riddle stomps his face. Ohno asks for mercy but Riddle puts him down with a sleeper suplex and elbow strikes until Ohno submits at 9:20. Riddle got to look like a total bad-ass with that finish, so hopefully he can ditch the "bro" nonsense that's holding him down, **¾.
Winner: Matt Riddle

The crowd is red hot for this, a far cry from the dead, sarcastic crowd these two had to deal with back in 2012 at EVOLVE 10. They get a quick start, with Ricochet having to back off into the ropes. Match restarts with Gargano working a headlock and Ricochet kipping up and they trade counters and use cartwheels to avoid bumps until reaching a stalemate. Crowd loves this. Ricochet asks which Gargano he'll get tonight, which triggers Gargano into upping the aggression. Ricochet can't hit a dive so he improvises with a springboard moonsault off the ring post! Ricochet's momentum comes to an abrupt end when Gargano drops him head first onto the turnbuckles. Gargano focuses on the head during the heat sequence. Ricochet shows signs of life countering with a standing moonsault onto Gargano's back. Ricochet rallies, hitting a modified 619 and springboard clothesline. Ricochet flips into a suplex and brainbuster for only 2. Gargano counters with a powerbomb and locks on a crossface! Ricochet blocks a jumping DDT and tosses Gargano over the ropes for a bumpy landing! Ricochet's leaping dive is good and the crowd chants "mamma mia!" Standing SSP and moonsault by Ricochet only gets 2. A top rope fight results in Ricochet landing on his feet out of Gargano's Frankensteiner! They sprint through a sequence of counters and stiff shots until Gargano counters with an inverted DDT into a crossface! Ricochet counters with a dead lift destroyer suplex into the turnbuckles! Ricochet goes to the top but Gargano rolls out of the ring, so Ricochet launches himself over the turnbuckles with a dive! Ricochet's springboard 450 is good but GARGANO KICKS OUT! Gargano counters a SSP and rolls him over for a scary nearfall! Gargano's superkick sends Ricochet to the outside, Ricochet catches Gargano on his shoulders, but Gargano counters with a reverse rana! Slingshot DDT by Gargano, but RICOCHET KICKS OUT! That's one of the best false finishes I've ever seen and it blew the roof off the building. Gargano angrily exposes some concrete and prepares for a DDT, but seemingly comes to his sense. Ricochet capitalizes with a quick roll-up and nails a standing lariat. Ricochet misses the Phoenix Splash, but he counters into a stolen GargaNo Escape! Johnny escapes and shoves Ricochet into the ring post. Johnny is feeling evil again and suplexes Ricochet onto the exposed concrete floor! Gargano hits another slingshot DDT and pins Ricochet for the title at 23:24! They maintained a blistering pace and busted out all kinds of high spots and high emotion. Gargano tunes in to his dark side yet again and delivers another Takeover masterpiece, *****.
Winner and new NXT North American Champion: Johnny Gargano

Belair's trash talking quickly gets on Baszler's nerves and the feeling out process quickly turns to shoving. Baszler grabs Belair's profoundly long ponytail whip and pulls her head-first into the ring post. Baszler would have been happy to take a count-out victory, but Belair beats the 10 count, only to find herself on the receiving end of a nasty beatdown. Belair finds her second wind and unleashes a flurry of offense after Baszler screamed that she was overrated. Baszler counters a splash with knees to the chest and hits a follow-up knee for a 2 count. Some fans are getting behind Belair as she trades blows and whips her hair across Baszler's midsection (even drawing some blood). Baszler blocks a double chickenwing by shoving Belair into the referee. Baszler grabs the brain, but Belair counters with a torture rack slam, but the ref is still asleep. Baszler's Four Horsewomen cronies run in, but Belair slams one onto the other. The distraction does allow Baszler to apply her patented chokehold as the ref wakes up. Belair fights to her feet and breaks the hold with a snap suplex! Belair misses her 450 splash (partially thanks to another Horsewomen distraction) and Baszler reapplies her choke hold. Belair is in the hold for a small lifetime before succumbing at 15:26. They did well to get the crowd into the match in what could have been a death slot following a five star match, ***.
Winner and still NXT Women's Champion: Shayna Baszler

They aggressively lock up and Ciampa starts targeting the wrist early, but Black answers with a side headlock. Black teases a dive and Ciampa ducks to avoid a roundhouse kick and copies Black's seated pose. Black defiantly seats himself as well, allowing Ciampa to attack to the face. Black hits a dive over the ropes and nearly pins Ciampa after a springboard moonsault. Ciampa shifts the momentum by driving Black into the ring steps repeatedly, including driving Black's knee into the steps with a suplex. Ciampa directs the action back to the ring and works over the knee for a good long while. Black saves himself from a tree of woe with repeated kicks to Ciampa's face, and he knocks him to the floor with a desperation enziguri. Black is properly selling his hurt knee. Black hobbles through a flurry of strikes and kicks for a 2 count. They block each other's finishers until Black hits a pair of spinning kicks and a German suplex for 2. Black tries to lift Ciampa up with his foot, but the knee gives out, and Ciampa strikes with a dragon screw leg sweep and half Boston crab. Black reverses the half crab, but his knee injury won't let him hold on for long. Ciampa sneakily catches Black with a Tower of London on the apron, for a pair of 2 counts. Ciampa ends a slugfest with quick roll-ups and lands a lariat. Black answers with a double stomp and brainbuster for only 2. Moonsault off the turnbuckles by Black, but he slips on water, allowing Ciampa's Fairy Tale Ending. Black kicks out, but the crowd hasn't been responding to the nearfalls. Ciampa exposes some concrete floor, just like Johnny Gargano did earlier, but Black hits flying double knees to send him back first onto the floor. Black Mass out of where, but Ciampa rolls onto his stomach to avoid a pin. A thousand other wrestlers are wondering why they've never tried that. Ciampa is up and shields himself with the ref on his way to hitting another Fairy Tale Ending, and this time the crowd goes nuts for the false finish. Ciampa delivers a third and fourth Fairy Tale Ending and retains at 26:30. I very much appreciated the psychology of the match, especially with Black's dedication to making his injured knee a story beat at every turn. Great win for Ciampa that further cements his place as a dangerous champion, ****.
Winner and still NXT Champion: Tommaso Ciampa

Ciampa takes his celebration to the stage, where's joined by his old friend, Johnny Gargano. They seem to make amends as they hoist their respective titles into the air. This is bad news for the rest of NXT.