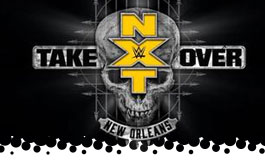 - Presented LIVE on the WWE Network on April 7th, 2018 from the Smoothie King Center in New Orleans, LA. Mauro Ranallo, Nigel McGuinness, and Percy Watson are at ringside to call the action, unless otherwise noted.

Not only does NXT introduce a new Championship for the first time since the WWE Network era began (that’s 4 years+ and counting), but we get the in-ring "debuts" of Ricochet and EC3 (formerly Derrick Bateman, who was cut due to having no upside, only to reinvent himself in Impact Wrestling). There’s some names here you wouldn’t expect for a Ladder Match. Ricochet wasted little time with his personal showcase, hitting a springboard shooting star press onto the two monsters of the match. Lars does his best job of securing that monster role, carrying a ladder into the ring and chucking it at the entire field of competition. Later in the match, Sullivan and Dain had a good time tossing around Ricochet to the delight of the crowd. At one point, EC3 and Cole team up, with EC3 ripping off Cole’s "Bay-Bay!" spot, cheesing him off enough to have a super-kick party. Velveteen Dream gets the next big spot of the match, dropping his Purple Rainmaker on Sullivan from the top of the ladder. Another of Ricochet’s many moments: Having his ladder tilted over, only to turn it into an offensive move, hitting a senton on the bodies piled up outside the ring. At one point, he and Velveteen Dream fight on a Ladder, held up between the steps of another ladder and the turnbuckle, ending with the visually stunning rolling Death Valley Driver ACROSS the elevated ladder! Sullivan continues the carnage, putting EC3 and the Dream through another ladder bridge with the Freak accident. One by one, each of the six combatants join the scramble, fighting each other along three ladders positioned under the hanging belt championship. Gradually, like a house of cards, they all fell, leaving only Adam Cole standing and able to claim the Championship as his own at 31:15. As far as Ladder matches go, this was one of the more fun matches in recent memory, with plenty of high spots and originality, and a good showcase for all involved. My only complaint is for the gimmick, half-an-hour is a little too long, but I won’t argue anyone saying my rating is too low. ****½

At the last Takeover, Moon escaped with her Championship with a lucky roll-up. In their second meeting on NXT TV, Moon again seemed destined to lose, only to be saved by Kairi Sane. Will three times be a charm for the Queen of Spades? Moon gets the special entrance (played to the ring), which lately has been a telltale sign of doing the job. Moon tries hitting a dropkick immediately after the bell, but Baszler side-steps it and decks her, sending Moon to the floor. They do a lot of knee strikes, and the amount of leg slapping really took me out of the action for a while. Yes, the smack is part of wrestling to avoid killing each other with harder strikes, but when you literally string together 4 or 5 spots and do it more blatant each time, you probably should mix things up. Moon at one point gave Baszler a taste of her own (bad) medicine, stomping on the elbow. Baszler, digging deep into her book of tricks ripped from Lethal Weapon, smashes her own arm into the post to realign her shoulder. Moon hits her on the floor with the Eclipse but can’t get her back in the ring immediately. Baszler goes for the Kirifuda Clutch, but the arm is still too damaged to keep it applied. Moon tries for another Eclipse, but Baszler counters into a modified version of the Clutch, gripping her hair instead of locking her arms. Moon fights, at one point getting a foot on the rope, but Baszler rolls her into the center of the ring, and Moon passes out at 12:52, giving Baszler the Women’s Championship. Started rough, but I liked the story it told. I could do without the "trapped in a CHOKE for three minutes", but I’m just nitpicking there. ***

To make a long story short, the Undisputed Era tried to ruin the Finals of the Dusty Rhodes Classic to avoid having to defend the Titles, so William Regal made them defend against both teams, but at the same time, gave them the opportunity to win the Dusty Rhodes Classic Trophy. Dunne and Strong are doing the partners who don’t like but respect each other. Undisputed Era is represented by O’Reilly and Adam Cole (BAY BAY), pulling double duty with Bobby Fish out for 4-5 months with a knee injury. Don’t worry, he barely does anything, getting bulldozed by the Authors of Pain and put through the Spanish announcer’s table at ringside. The chaos goes on for so long at the start that Mauro laughs at the notion this is supposed to be a tag team match, not a free for all. O’Reilly does his best to lock two men in submissions at the same time, but one of the AOP makes sure to remind him he’s going to have a bad time. All in all, a basic formula match with little when it comes to memorable high spots. Rezar gets taken out with a double suplex, and Akem becomes incapacitated at ringside somehow. Dunne hits O’Reilly with the Bitter End... and then Roderick Strong turns heel on him, hits the End of Heartache, and throws O’Reilly on top for three at 11:40, giving the Undisputed Era the trophy to a tournament they were never officially entered in! Now THAT’s a swerve that paid off a dormant storyline (no doubt thanks to the situation with Fish out of action). Average match with an awesome finish. ***

This time last year, Black made his NXT Debut at Takeover: Orlando, defeating none other than Andrade Almas, back when he was doing his losing streak but doesn’t care because he liked to have fun gimmick. I’m surprised they didn’t give that gimmick to Mojo Rawley on the main roster (yet). With all heels going over so far, I’m convinced they won’t put the belt on Black here, saving the feel-good moment for the final match. Black controlled early, but Vega wasted little time in interfering, sending Black into the steps via a flying head scissors. Almas works the arm a bit, but Black rallies. Almas gets the better of a strike exchange and hits Black with a springboard corkscrew plancha. Almas grabs the NXT Title, using it as a diversion to allow Vega to once again interfere, spiking Black with a short-rana, but that only gets two. Black counters the Hammerlock DDT with a cradle for two. He hits Black Mass, but Vega puts Almas’ foot on the ropes to save him from defeat. Vega with another distraction, allowing Almas to hang Black up in the ropes and hit the flying Double Stomp onto the apron. Back in, and the running knees gets two. Black counters the Hammerlock DDT for a second time, but gets sent to the apron, where Almas pulls from the pages of Takeover: Philadelphia and hits the double knees against the post. Black mounts a short comeback, only to walk right into a Hammerlock DDT for a near fall that I was sure was going to be the end. Vega tries to interfere AGAIN, but this time Black avoids it, having her lands in the arms of Almas instead, and the Black Mass finishes at 18:25, likely sending Almas and Vega to the main roster in the process. Not as good as Almas’ last defense at Takeover, but still a great match that shows how much momentum Almas has had since being paired with Vega. ****

"Unsanctioned" means Gargano can’t hold the company responsible in case of injury, and the referee is only there to count a pin-fall or call for a submission. Nothing else. At this point of the show, I expected a troll job, maybe have Gargano’s wife turn on him and help Ciampa. Something to piss off the fans and screw over Gargano, yet again. Ciampa does the ultimate heel move... coming out without entrance music. HOW DARE YOU! After a long pause after the bell, they go right into the hockey brawl. You didn’t expect two guys of their caliber, this dedicated to the story, doing the dumb move of opening the match with a collar-elbow lockup, did you? This was paced out as if they were given the OK to not hurry things up and let it play out, with some methodical punishment from both ends. Two of the sickest bumps came with Ciampa taking Gargano off the announcer’s table with a suplex, with Ciampa smacking his head on the floor in the process, and a bit later, Gargano hitting Ciampa with a sunset flip Powerbomb onto the exposed concrete (complete with "you deserve it" chant). At one point, Ciampa stole a pair of crutches from a plant in the crowd but would factor into the match a bit later. Gargano ended up being the first to use the crutches, paying Ciampa back for his multiple sneak attacks in recent months. He locked Ciampa in the GargaNO Escape, but a good old thumb to the eyes saves the day for the Sicilian Psychopath. Ciampa attempted to strangle Gargano with his wrist tape but settled for a kick below the belt. He hits Project Ciampa (Powerbomb into double knees) for two. Gargano kills Ciampa with a lariat, lawn darts him into an exposed turnbuckle, and has a Super-Kick party for a near fall. They do a long exchange on the top rope, ending with Ciampa hitting a Super-Sized Project Ciampa for ANOTHER near fall. Seriously, each time it’s like "how can they top the last near fall? Oh, that’s how." Ciampa takes off the knee brace and pulls the pad down but Gargano grabs the brace and SMACKS his surgically repaired knee with it. Gargano snaps the crutch in half and teases stabbing Ciampa in the face but shows mercy. They tease the "sitting beside each other" spot, but Gargano doesn’t fall for Ciampa’s false attempts at sincerity, ducking a cheap shot, and hooking the GargaNO Escape WITH THE KNEE BRACE WRAPPED AROUND CIAMPA’S FACE, and that gets the much-deserved tap-out at 37:00. Yeah, they needed something intense to finish a match where murder seemed like the only option. Post-match, Gargano and Candice LeRae celebrate without any shenanigans. I’m SHOCKED. What an outstanding finale, with these two doing their absolute best in having a FIGHT, not your typical wrestling match. I’m sure some will complain it needed to trim it down a bit, but unlike the opener, I felt the length only added to this one, and will be hard to top when WrestleMania rolls around in less than 24 hours. *****

Final Thoughts: My final thoughts for these Takeover specials are becoming a bit stale. Addressing the undercard as good wrestling, while the top billed matches all met or exceeded expectations, including a 5-star performance in the true Main Event. It’ll be interesting to see where they go moving forward with Ciampa and Gargano, having done the big blood feud brawl in their first meeting.