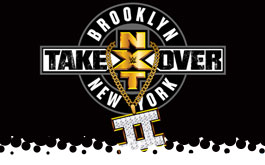 - Presented LIVE on the WWE Network on August 20th, 2016 from the Barclays Center in Brooklyn, NY. Corey Graves and Tom Phillips are on hand to call all the action, unless otherwise noted.

No Way Jose vs. Austin Aries:

Suitable choice for the opener. If you'll recall, it was about a month ago where Austin Aries was pouting about his loss to Shinsuke Nakamura at Takeover: The End, and No Way Jose came out to try and put a positive spin on things, only to get laid out and beaten down after a lengthy dance session. Ever since that moment, Aries has done his best to keep his distance from him until complaining about not being booked for a match for Takeover, and here we are. Jose comes out and leads a huge conga line for... reasons unknown. He gets a good reaction, but the crowd is surprisingly more supportive of Aries. That really throws things off. Good intensity from Jose, who chooses to leave his dancing in the locker room and wrestle the match like he's really out for vengeance. Aries clearly works like he's out of Jose's league, but gives him enough here and there to give Jose the rub, even if the outcome isn't in question. At one point Jose actually broke out of the Last Chancery and scored a near fall for with a Falcon Arrow, but Aries would constantly break free of the Cobra Clutch Slam, and eventually made Jose tap out to the Last Chancery at 10:42. Post-match, Aries continued the beat down until Hideo Itami made the save, and in what had to be a "screw you" to CM Punk, was given the green-light to KO Aries with the GTS. *** Enthusiastic start to the show. Jose kept up with the veteran, but his inexperience was his undoing despite the strong effort.

After several weeks of victories over lower-level performers, Billie Kay gets to be the sacrificial lamb to the debuting Ember Moon (formerly known as Athena), who looks like a soft attempt at ripping off a Mortal Kombat character, complete with red contact lenses. Her entrance leaves a bit to be desired, as she just comes out just like anyone else after hype videos indicating a warrior. Surprisingly balanced match, with Billie Kay taking the majority of the offense. Maybe being in the ring with a more experienced performer helps, as she looked better here than she had in the last few matches featured on TV. Only obviously botch was the first lift-up for the Body Vice submission hold. Finish came out of nowhere with Ember coming off the top rope with a twisting dive into a Stunner at 4:35. *1/2 Not the most impressive debut, but Moon has potential to be the one who dethrones the reigning Women's Champion, and she had a cool finisher as long as he doesn't screw it up more often than not (I'm looking at you, Cena).

Not much to this one, and it's another in-ring debut, so the outcome shouldn't come as much of a surprise. Almas made his debut at the last Takeover (The End) in a so-so match over Tye Dillinger and has mostly been unimpressive in every appearance, so to the shock of nobody, the crowd is heavily in favor of Roode, singing along to his entrance music has he descends from a platform, something along the lines of Shawn Michaels' entrance at WrestleMania 25. The word of the match... GLORIOUS. Despite the lukewarm reaction, Almas worked better here than his other NXT appearances, but it's not a good sign for anyone when they are the cannon fodder for an incoming "star." At one point Almas hit an amazing springboard, corkscrew plancha to the floor. Almas hit his running knees to the corner (which I uncreatively had labeled as "Thunder Thighs") but Roode countered the arm-wringer DDT, planted Almas with a Spinebuster, and finished with a basic Pump-Handle Slam at 10:25. Well, after a strong entrance, and a solid match, they give him one of the weakest finishing moves I've seen in a long time. **3/4 Almas really stepped up his game here, so there's hope he can pick up momentum somewhere down the line. Give Roode a more impressive finishing move, and he's clearly a guy that will get the next passing of the baton when it comes to the NXT Championship.

After months of ducking the challenge, the Revival are finally forced to defend the belts against the one team they haven't been able to defeat. I don't know the intention, but they better not give Ciampa and Gargano the name DIY (Do It Yourself), but with it on a t-shirt and saying it here and there during the match, it seems likely. Have I mentioned how AWESOME their match was during the Cruiserweight Classic? Standard formula of the Revival to kick things off, selling most of the time and trying to come up with a plan while doing some stalling on the floor. The challengers finally have enough of that, so Gargano hits Wilder with a tope suicida and Ciampa nails Dawson from the apron with a running knee. Ciampa ends up playing the face-in-peril, taking a heck of a beating and teasing multiple hot tags. First time it's prevented with Gargano being pulled off the apron and the next Wilder "accidentally" falling into the ring, creating a distraction for the referee. Gargano finally got the hot tag and hits Dawson with a jumping neck breaker for two. Slingshot spear from the apron for a near fall. Blind tag from the Revival and a DDT out of nowhere gets two. Ciampa slaps on the bridging arm-bar, but Wilder breaks free from Gargano to make the save. Double suplex is countered and Ciampa with a small package for two. Shatter Machine is countered and a Super Kick gets ANOTHER two count. Ciampa and Gargano with the Knee Sandwich, but Dawson puts Wilder's foot on the ropes at 2.99999. Ciampa gets sent to the post and Wilder clips the knee of Gargano. They continue to punish the knee, and the Reverse Figure-Four unfortunately is too much for Johnny Wrestling, and he taps at 19:10. ****1/4 This had potential to be a show stealer, and it more than delivered. Watching this the first time without a counter, it felt like they were going at it for half-an-hour, and I just wanted more, with so many heart-pounding near-falls and outstanding tag team chemistry from both teams.

The rematch we've been waiting for since ">Takeover: Dallas when Asuka won the belt from Bayley. Between the hype video and constantly harping that Asuka is the undefeated Champion, you might be tricked into believing that Bayley just might walk away as the first ever 2-time Women's Champion. Bayley gets extra Whacky, Waving, Arm-Flailing Inflatable Tube Men, and Asuka gets a long sheet of toilet paper. SPECIAL ENTRANCES RULE! Bayley's formula was to bait Asuka into pinning predicaments, but when that wasn't working, she went toe-to-toe with her instead of trying to out wrestle her. Lots of hard hitting strikes, especially from Asuka, but Bayley more than held her own. You can always tell how hard Bayley is working based on her hair, and her ponytail was a complete mess about 5-minutes in. Cool spot with Bayley rushing Asuka near the ropes with a knee, Asuka retaliating with the hip attack, and Bayley right back with a jumping boot to the face. Asuka continues to dish out punishment, so Bayley dares her to hit her in the face and counters a back hand with a back slide for two. They botch a Powerbomb positon and Bayley turns it into a Dominator for two. Asuka with the Asuka-Lock, and the look on Bayley's face is priceless story-telling, a face of fear knowing she couldn't escape it the last time. She finds the power to escape and hits the Bayley-to-Belly for two. Asuka with the Lock again, and this time Bayley rolls through into a cover for a heart-stopping two count. I thought that was it, honestly. Asuka with more strikes, Bayley tightens the ponytail and retaliates with a slap, and Asuka finally puts her away with a pair of roundhouse kicks at 14:07. Post-match, they make nice and the crowd serenades Bayley, who more than likely is moving to the Main Roster. **** took a little time to get into, and it followed a tough match, but they pulled out an excellent sequel with a more aggressive Bayley doing everything she could possibly do to match Asuka and falling just short.

Main Event of the evening. Nakamura was named the #1 Contender following an impressive victory over former Champion Finn Balor (as well as key victories over Sami Zayn and Austin Aries), but Joe claims he's an undeserving contender and that Commissioner Regal has no respect for him as Champion. Nakamura is played to the ring via live Violin player, so you know he's winning. Joe doesn't get anything special for an entrance, so he's definitely jobbing. They take turns throwing strikes, but Joe's biggest offense came through a series of submission holds, including a Boston Crab, transitioned into an STF, and then finally into the Crossface. Nakamura fought out of a Muscle Buster attempt and hit a beautiful one-foot missile dropkick. Joe survived some of Nakamura's strikes and caught him in a modified Texas Cloverleaf. He slapped on the Coquina Clutch, but Nakamura managed to get his foot on the bottom rope to force a break. Nakamura with a big German Suplex, but the Kinshasa is countered with a Power-Slam for two. Joe with the Muscle Buster for two. He goes for another, but Nakamura counters with a short-form version of Kinshasa and THAT gets two. Nakamura comes off the top rope with a knee to the back of the head, and a second, more impactful Kinshasa finally finishes Joe at 21:18. So that's the end of Joe in NXT, too? ***1/2 Really good match, but a bit flat at times, and could've stood for a little time trimming. This also suffered a bit from following not one but two outstanding performances, and without a buffer, it does affect the viewer.

Final Thoughts: 5 good-great matches and one quick showcase of a new talent packed into a 2 ˝ hour time slot is never something to complain about. Maybe the expectations going in were a bit too high, but almost everything delivered the goods, and yes, even though Joe vs. Nakamura was a bit disappointing, it was still a really good match that would challenge for top match on the card in most instances. I feel like there were too many downer finishes and heels going over with the exception of Nakamura's victory. Bayley's dreams are crushed, Gargano and Ciampa are on the brink of the biggest upset before having a heart-breaking loss, and both Austin Aries and Bobby Roode went over clean (ignoring the smart-crowd support for both). Strong Thumbs Up despite the negative feelings.