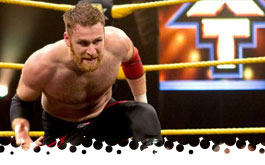 This is the result of an insta-feud after both men came up short in the #1 Contenders Tournament (Breeze beat Hideo up for no apparent reason in the locker room). Breeze has added a fuzzy selfie-stick to his entrance, and a girl jumps the barricade to lunge at him (likely a plant, as the commentators react to her). Match starts with Hideo missing kicks, and I find myself hoping this is the night he finally hits a GTS. Breeze is a hard target, but Hideo catches him with some stiff shots. Tyler finds an opening by going after Hideo’s supposedly injured leg. Breeze applies a Figure Four around the ring post. Hideo counters with a GTS tease, but a Breeze super kick gets a near fall. Hideo “hulks up” and unleashes a flurry of hard kicks. Hesitation drop-kick and a leg lariat finishes Breeze at 8:17. Suitable as an opener, but nothing terribly memorable, **Ľ.
Winner: Hideo Itami

-William Regal and a referee have a word with Kevin Owens backstage. We can’t hear their conversation, but it’s safe to say that Owens had better be on his best behavior later.

Corbin has two previous quick wins over Dempsey, but is looking for revenge after Bull’s interference resulted in his first pinfall loss. Corbin charges the ring to initiate a brawl. Bull manages a snap suplex onto the steel ramp. Some fans laugh at Bull when he can’t find a weapon under the ring. Corbin manages a power slam counter for a near fall. Dempsey nails the Diving Head butt for only 2. They manage to botch the Cactus Jack clothesline spot and both take a bad tumble. Dempsey sends Corbin into the steps and grabs a chair. Corbin blocks the chair and finishes with the End of Days at 4:10. This was a bad match that exposed both men, ˝*.
Winner: Baron Corbin

-Regal and the ref visit Sami Zayn in his locker room. I assume that Sami had better behave as well.

-Becky Lynch can be seen warming up with pushups on stairs.

Less than a minute in, and Blake botches a counter against Sin Cara. The match continues with a Sin Cara hot streak, but Kalisto manages to botch a springboard move too. Sin Cara hits a rough Sunset Bomb for a near fall and the crowd is at risk of turning on the match. Did WWE rehire Mistico or something? Sin Cara catches Murphy with a springboard arm drag and the Lucha Dragons hit a Wheelbarrow Senton. Blake and Murphy catch Sin Cara with a double team neck breaker for 2. Kalisto gets a supposed hot tag and catches Murphy with a dangerous spike DDT. They exchange finisher counters and pinning predicaments, almost resulting in a double pinfall. Blake rolls through a Sin Cara cross body, but Sin Cara counters with another cross body. Sin Cara manages a dead lift power bomb on Murphy. A series of unfortunate events leads to Sin Cara eating a series of moves while Kalisto is on the floor, and Blake ends him with a Frog Splash at 7:31. They never recovered from the string of embarrassing botches, *.
Winners and still NXT Tag Team Champions: Buddy Murphy and Wesley Blake

Balor gets the extra deluxe creepy entrance, complete with body paint and tassels, and it gets over HUGE. Adrian is unfazed and catches Finn in a headlock takedown. Balor hits a side tackle, but Neville kips up. Balor rolls through a Sunset Flip for some beautiful drop-kicks. Neville nails a springboard missile drop-kick for only 1, leading to a chinlock. Neville controls the pace for a bit, maintaining control with a delayed vertical suplex. Balor comes back with a running somersault senton to the floor. Balor stalks Neville around the ring and puts him through the barricade with a, you guessed it, drop-kick! Flying double stomp to the head by Balor only gets 2. They both go down after trading hard kicks. Neville desperately hits a pair of German suplexes for a close near fall. The Red Arrow connects but BALOR KICKS OUT! Balor surprises with the Sling Blade and nails a lariat. Neville kicks out of a reverse lift DDT and counters with an enziguri on the turnbuckles. Adrian misses a Red Arrow opportunity, but delivers a sick kick. Balor counters the Red Arrow and gets a painfully close near fall! Balor kicks Neville into the turnbuckles to set up the Flying Double Stomp to the chest! Balor pins Neville at 13:31! A series of well-crafted false finishes elevate a too-short, almost classic, ***ľ.
Winner: Finn Balor

-Balor and Neville bump fists, so no hard feelings.

I’m taken aback by just how much I respect these four women and I hope they can put on a great show tonight. Match starts with Charlotte emerging dominant, but Bayley takes the fight to her. Sasha and Becky work together, throwing Charlotte into the LED board on the ring frame. Banks and Lynch gang up on poor Bayley, recovering from a miscue to drive her into the turnbuckles. As per usual, the heels can’t decide on who should get the pinfall and Lynch catches Sasha with a nice suplex. Lynch attacks Bayley’s hurt leg, but Sasha breaks it up. Charlotte returns in time to plant Banks with a neck breaker. Charlotte hits another neck breaker on Lynch, but her pin attempts keep getting broken. Sasha sidesteps to send Charlotte into Lynch with a spear, and again with Bayley. Sasha is calculating and piles Charlotte and Becky in the turnbuckles for her double knees! Bayley surprises Banks with a suplex and delivers a series of elbows to Charlotte. Bayley nails a top rope rana on Charlotte! Belly to Bayley suplex connects, but Becky prevents a pinfall. Bayley lands a baseball slide drop-kick through the turnbuckles, and Sasha wipes her and Becky out with a dive! Charlotte nails a plancha on all three opponents! Charlotte rolls Becky in, but gets caught with a suplex for 2. Bayley nails Lynch with a German and suplexes Charlotte off the top, but Becky breaks the cover! Sasha tries to steal the pinfall, but Charlotte kicks out! Sasha applies a crossface but Charlotte guts it out! Banks has to roll Charlotte into a pinfall for the win at 11:55! HOLY EXCELLENT FINISH! This was a bit sloppy at first, but once it got rolling it was nonstop action, with plenty of exciting near falls and surprises, ***˝.
Winner and new NXT Women’s Champion: Sasha Banks

-Sasha has a moment fitting a significant title change. Charlotte looks for a hand shake but pulls Sasha in for an embrace. Sasha shoves her off and poses with the title. Good stuff here, and it frees Charlotte for a potential main roster spot in the coming months.

It’s downright surreal that El Generico vs. Kevin Steen is main eventing a WWE produced show, and that Owens is doing it in his second televised match. Bell rings and Owens immediately begins stalling. This leads to Zayn diving over the referee to wipe Owens out at ringside! Owens retaliates with a clothesline and sets a methodical pace. Sami gets decimated for several minutes and Owens seems to be enjoying himself. Kevin nails a back senton for 2, and this is starting to remind me of Lesnar vs. Cena at Summerslam (which the commentators also mention as I type this). Zayn pops up with a clothesline and dumps Owens to ringside. Sami pursues, dominating a ringside brawl, and nails the Blue Thunder Bomb in the ring. Kevin nails Zayn in the face and delivers the running cannonball for a close near fall. Owens drops Sami head-first on his knee for another devastatingly close 2 count. Sami retaliates with a half nelson suplex for 2. Owens snaps Zayn’s neck and blocks a superplex, setting up a Swanton Bomb, but Zayn counters! Exploder suplex by Sami, but the Helluva Kick misses. Zayn blocks the apron power bomb and hits a split legged moonsault to the floor, knocking his own head off the ramp. Zayn has a hard time regaining his composure and Owens nails a pop-up power bomb! Zayn is selling a head injury and appears to be in big trouble. Kevin capitalizes on the injury with a series of punches and uppercuts, to the point where he risks a DQ. A trainer checks on Zayn, but Owens pulls him up for a pair of power bombs. Zayn doesn’t kick out, so much as desperately roll out of the cover. Kevin pulls Sami from the trainers yet again and delivers two more power bombs. The referee prevents a third power bomb and calls for the bell at 22:45. Owens is declared the winner via referee stoppage! Oh my stars and garters. The one-sided nature of the match sort of deflated the crowd, but this was downright compelling in it’s homestretch. I’d say this is a hard match to rate in the traditional sense, but I’m giving it **** for being an important chapter in a great story.
Winner and new NXT Champion: Kevin Owens

Final Thoughts: A bit rockier than the other NXT specials, but once this got down to business, there was no stopping it. Thumbs up for a memorable show.