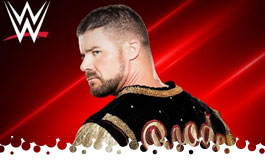 1st Round Match in the Dusty Rhodes Tag Team Classic. Swann and No Way Jose is the perfect marriage of mid-card acts for a tag team tournament. Gulak and Swann start. Gulak doesn’t budge on several shoulder tackles and rolls Swann up for two. Modified sunset flip for another two count. Swann with a dropkick and Jose comes in to work the arm. Jose takes Nese over with a snap mare and a one-man flap jack. Nese gets a boot up in the corner and connects with a series of kicks. Jose with a delayed vertical suplex. Jose with a slam and Swann comes down with a splash for two. Nese throws Swann into the ropes and comes off the apron with a Super-Kick after faking him out with a moonsault. We return from commercial with Gulak in control of a chin-lock. Swann escapes and hot tag to Jose. He avoids a charge and turns Nese inside out with a clothesline. Jose blocks a double suplex attempt and tosses Nese to the floor. Pop-up Uppercut to Gulak for two. Swann sends Nese to the floor again and follows with a springboard plancha. Jose with the Cobra Clutch Slam to Gulak finishes at 6:43. ** Decent back and forth action, but too short to go anywhere. Swann and Jose have the fortunate luck of facing the Authors of Pain in the next round.

- We’re told Hideo Itami is injured and will not team with Kota Ibushi in the tournament. Itami was injured in a tag team match a few weeks back taking a botched snap power-slam from Riddick Moss.

- Tye Dillinger has issues with Bobby Roode for walking out on him last week and leaving him to the wolves. Dillinger wants a match with Roode at Takeover: Toronto, and William Regal has made it official.

- Austin Aries is scarfing a banana as he avoids answering who will be his partner in the Dusty Rhodes Tag Team Classic. He takes a shot at Hideo Itami for having to pull out of the tournament.

This should be quick. Roode still has the rotating pedestal for his entrance, and his theme music is available on all music streaming devices (iTunes, Spotify, Googe Play Music and whatever is supported by Amazon Cloud). I wouldn’t be surprised if the entrance is longer than the match itself. We call that the Undertaker Rule™. Maluta doesn’t even get an introduction. Poor bastard. Lockup and Roode with some chain wrestling. Roode poses again, so Maluta nails him with a dropkick to crowd disapproval. Maluta with a head scissors and roll up. Roode quickly regains control with a back suplex. Roode with chops in the corner and a hard whip across the ring. Maluta with a comeback, but the crowd still doesn’t approve. Roode cuts it off quickly with a spine-buster, and the GLORIOUS DDT finishes at 2:54. I’d say the entrance was just a bit longer. * Just a showcase for Roode. The mutant crowd is making it hard to give him heel heat when he’s too entertaining as an arrogant jerk.

- Bobby Roode cuts a post-match promo, but Tye Dillinger invites himself out for a slugfest and clears the Glorious One from the ring. At least the crowd reacts to Dillinger like a baby-face.

- Liv Morgan Interview. She’s got beef (or Kangaroo) with the Aussies (Billie Kay and Peyton Royce) after being humiliated by Asuka in a 55-second embarrassing loss. Morgan’s terrible worse-than-porno quality line delivery is quickly interrupted by a 2-on-1 beat down. This may be hard to believe, but they might be putting the women’s division... on notice. That isn’t an over-used term in WWE. Who scripts these promos, the same guys who create the generic dialogue in WWE 2K17, available now for PlayStation and X-Box?

1st Round Match in the Dusty Rhodes Tag Team Classic. Otis and Knight have been working NXT events lately, sometimes as "Heavy Machinery." I guess "Niko Bogojevic" was too hard to pronounce, but Otis Dozovic is better. Aries’ mystery partner turns out to be former rival and tag team partner, Roderick Strong. WWE continues to raid ROH and TNA about 8-10 years later than anticipated. Aries makes fun of Otis’ bulky build. Aries with a side headlock, but a body press attempt is easily caught and gets sandwiched between his much larger opponents. Strong with chops on Knight. Crisscross and Knight surprises him with a dropkick. Otis and Knight with some double team success to clear the ring. Otis climbs the ropes for a Vader-Bomb, but Aries with a distraction, allowing Strong to knock him back to the canvas. Strong with a dropkick for only a one count. Aries and Strong with quick tags. They set up for a double suplex, but Otis counters and hot tags Knight. He runs over Aries and Strong with shoulder tackles. Overhead belly-to-belly suplex to Strong, followed by an avalanche. Strong saves Aries from another, sending Knight flying over the top rope. Aries with a tope suicida. Strong with a running knee to the face, gut-buster, and running boot to finish Knight off at 5:13. **1/4 Another decent, but short, 1st-rounder. So far, all the logical regulars and super-teams have gone over. Maybe they can have an underdog win next week as we complete the first round.

- Andrade "Cien" Almas is standing by with a special interview to explain his actions... with a translator. He had to lose his mask to come to NXT, and the fans never gave him the respect he deserved, so now all he cares about is himself.

Not the first time we’ve seen Nikki Cross, but her first match as a member of the mysterious group known as SAnitY. Cross attacks at the bell and pounds away in the corner. Kamela from out of nowhere with a suplex, but Cross is up. She drives a knee into the midsection and connects with a neck breaker. Kamela tries to fight free, but Cross nails her with a twisting Fisherman Suplex for the three count at 1:04. Post-match, Cross continues to punish her opponent, and nails Eric Young for trying to stop her, so the referee reverses the decision. That’s how you earn your first victory in NXT. Crowd boos the announcement, because the mutants refuse to acknowledge that SAnitY is meant to be booed.

- Shinsuke Nakamura comes out to address Samoa Joe. Remember, it was last week where Nakamura and Joe got into a pull-apart brawl that saw some security guards taken out in the melee (some of them recognizable as undercard guys from the live events). Nakamura challenges Joe to take another shot at him. He’s quickly interrupted by Patrick Clark and his Inspired by Prince Fashion™. I’d make an Orlando Jordan in TNA joke, but I don’t think anyone else remembers that. Shows you the confidence they have in a Tough Enough rookie to give him a live microphone, and he’s way more comfortable cutting a promo, against the top guy, than Liv Morgan in pre-taped segments. He challenges Nakamura to a match and gets laid out with a kick to the head for it. Samoa Joe shows up on the ramp, but hangs back to watch Nakamura take Clark’s head off with Kinshasa.

Final Thoughts: Maybe I’m being a little hard on the 1st Round matches. None of the matches are great, but they aren’t meant to be. Most of them were acceptable when it came to in-ring quality, and others were meant to introduce new talent and push established teams hard with impressive, one-sided victories. We touched up on Nakamura/Joe, Dillinger/Roode, Morgan/The Aussies, and got another glimpse at SAnitY as well as the NXT debut of Roderick Strong. Not too bad of a 60-minute block of wrestling.