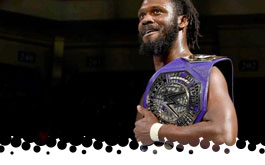 - Last week on 205 Live, TJ Perkins defeated Rich Swann in a Non-Title Match to build momentum for a Triple Threat Match, also featuring THE Brian Kendrick, at WWE Roadblock… Jack Gallagher picked up another victory, this time over Drew Gulak, but he has unfinished business with the JTT205S (Jobber to the 205 Stars) Ariya Daivari… Mustafa Ali said he’ll change our minds for judging him because of his name, but sucker punches Lince Dorado after the match like a total heel… Noam Dar and Alicia Fox have no chemistry, but has that stopped WWE before?

- Highlights of Rich Swann vs. TJ Perkins vs. THE Brian Kendrick from Sunday’s Roadblock. It didn’t take long for Swann’s celebration to be interrupted by Neville, who turned heel by cleaning house of Swann and Perkins, after spending months as an afterthought wallowing in the purgatory that was Superstars tapings.

- Presented on the WWE Network from Detroit, MI. Mauro Ranallo, Corey Graves, and Austin Aries are calling the action, unless otherwise noted. Tonight’s advertised Main Event is Rich Swann and TJ Perkins taking on Neville (a.k.a. The King of the Cruiserweights) and THE Brian Kendrick.

Two weeks ago on Monday Night Raw, Jack Gallagher gave Daivari a thorough thrashing. Last week on 205 Live, Daivari warned Gallagher that things aren’t over between them. Daivari with a less-than friendly handshake, but that’s 10 for 10! Lockup and Daivari goes for the arm. Dorado flips through a wrist-lock and shows off his athleticism without doing any wrestling. Dorado with a failed visit from the top rope. Daivari with a jumping neck breaker for two. He unloads on Dorado with some ground n’ pound for another two-count. Whip to the corner, Dorado misses a dropkick, and Daivari hits him with a short-clothesline for two. Sliding forearm to the back for two. Dorado side-steps a charge into the corner and unloads with rights. Whip is reversed, and Dorado hits a handspring Stunner. Daivari bails and Dorado follows with a tope con hilo, almost landing on his head. The replay shows his knees catch the top rope. Back inside, a flying body press gets two. Dorado with a springboard hurricanrana for two. Daivari with a boot in the corner and the Frog Splash finishes at 5:39. That seemed sudden. Daivari with another victory?! Considering he’s in a program with Gallagher, this doesn’t come off as much a surprise. Solid action considering the time limitations.

- Post-match interview with Daivari. He shames people for turning a blind eye to Jack Gallagher because they find him entertaining. He’s not a gentleman, he’s a scoundrel. Not going to lie, a lot of these promos on 205 Live have been weak.

- Neville and THE Brian Kendrick are backstage. Kendrick tries sucking up to Neville, but Neville reminds him that tonight they may be partners, but they aren’t friends, because there’s only room for one King of the Cruiserweights.

- Tajiri is still coming to 205 Live. The question is when that will be happening.

Please shoot me. Alicia Fox is one of the worst characters in modern WWE history, and somehow has remained employed by the company for almost a decade. Last night on Raw, Alexander defeated Noam Dar with the Lumbar Check. Post-match, Dar once again was smitten with Fox. I’m assuming they shake hands, but we got a needless close-up of Fox at ringside. Alexander controls the early moments, working the arm. They take turns decking each other with running forearms. Gulak clotheslines Alexander on the middle rope and puts the boots to him. Alexander goes for a sunset flip, but Gulak counters. Gulak meets a double boot in the corner. Whip to the ropes and Alexander with a handspring enzuigiri. Springboard clothesline for two. Gulak avoids the Lumbar Check and catches Alexander on the jaw with an elbow. Alexander blocks a suplex attempt and counters with his own, taking them both backwards over the top rope, to the floor. Gulak shoves Alexander into Fox, who sells her ankle. Back inside, Gulak continues beating on Alexander as Noam Dar makes his way to ringside to check on Fox. Alexander sees it, allowing Gulak to roll him up for two. Alexander quickly comes back with the Lumbar Check to finish at 5:32, and he quickly follows Dar up the ramp into the abyss behind the curtain. Another solid performance crammed into a small window.

- Dasha Fuentes stops Drew Gulak for some comments. He blames Alicia Fox for being at ringside. He says "this is a man’s world" and that women don’t belong on 205 Live.

- Hype video of "The Extraordinary Gentleman" Jack Gallagher. He has a unique look and wrestling style, I’ll give him that, but I don’t see it connecting too well with the general WWE audiences.

- The Cedric Alexander-Noam Dar-Alicia Fox love triangle backstage continues to make me wish cancer on myself for having to watch it. "Did you win your match?" The ankle injury must’ve been so severe that she couldn’t hear Alexander’s music play for his victory since she was still being carried up the ramp as it happened.

Neville is a much-needed addition to the roster, adding a bit more credibility to the Cruiserweight Title chase, even if he hasn’t done much on Raw since Brand Split 2.0. No handshakes this time around, our first match in 205 Live history without one! Neville drops Swann with a forearm and takes him to the corner. Snap mare and basement dropkick to the back of the head. Neville drops a knee across the back of the neck before hooking a chin-lock. Delayed vertical suplex into a cover for two. Neville with a running forearm in the corner as he continues to dominate. Perkins tags himself in and surprises Neville with a flying body press. Kendrick tags himself in and pounds away. Neville takes exception to being tagged out against his will. Crisscross and Perkins hits Kendrick with a jumping heel kick. He meets a boot in the corner, but counters Sliced Bread #2 by trapping Kendrick in a Tree of Woe and hitting a basement dropkick for two. Perkins with a slam and slingshot senton for two. Kendrick flips out of a back suplex and hits a running leg lariat.

Swann tags himself in and gets stomped down immediately. Swann finally mounts a bit of offense, hitting Kendrick with clotheslines. He goes for a double stomp, but Kendrick counters with a flatliner. Neville tags in and hits a bridging German Suplex for two. Neville meets a boot in the corner and walks into a Super-Kick for a near-fall. Neville turns Swann inside-out with a short clothesline. Perkins and Kendrick each with the tag. Perkins with a double chicken-wing into a stomach buster for two. Perkins with the Detonation Kick into he Knee-Bar, but Neville saves with a basement dropkick. Swann in with a roundhouse kick to Neville. Double Super-Kick to Kendrick for two. Perkins knocks Neville to the floor but misses a slingshot dropkick. Kendrick hits Swann with Sliced Bread #2 and the Captain’s Hook’s, but Perkins saves. Neville deposits Perkins and goes back to picking the bones of Swann. Perkins tags back in and springboards into an enzuigiri from the King of the Cruiserweights. Kendrick takes out Swann with a tope suicida, and Neville finishes Perkins with the Red Arrow at 14:09. Strong performance to put Neville over as a serious contender, mostly dominating both opponents whenever he was in the ring. Another strong Main Event in a series of them. ***1/2

Final Thoughts: With Neville added to the mix, we’re at least establishing a new storyline to feature the Cruiserweight Championship. Considering the last feud was over Kendrick trying to sucker Perkins into throwing the match out of pity for him, anything is a step up in quality. I’m already dreading the romance storyline centered around Alicia Fox, knowing how long it will run and how bad it’s going to get.