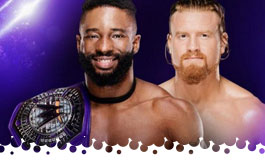 How long until they book the break-up of Kendrick and Gallagher? There's honestly little need for teams since they don't have a Tag Team Title. Drew Gulak has joined the commentary team for this one to spread anti-Lucha Propaganda. Kendrick and Dorado start. Kendrick escapes a head scissors and goes to work on the arm. Kendrick with a shoulder tackle for two. Crisscross and Dorado with a spinning head scissors and a dropkick. Kalisto in with an assisted splash for two. Dorado comes off the top with a double axe-handle and grabs a headlock. Gallagher with the blind tag, getting a shot in from the apron. Dorado counters a slam with a small package for two. Kalisto springs in with a seated senton and lays into Gallagher with kicks. Kalisto with a spinning head scissors. Gallagher avoids a tornado DDT and bails. Kendrick (with another blind tag) sneaks in with an axe-handle to the back of the head. He sits across the back of Kalisto and unloads with forearms. Gallagher with a whip and elbow for two. Kalisto gets hung up across the top rope and Kendrick lays him out with a boot for two. Kalisto dumps Kendrick over the top rope and tags in Dorado. He comes in from the top with a flying body press. He drops Kendrick with chops and comes off the second rope with a flying head scissors for two. Dorado with the springboard stunner and tope suicida. Gulak straddles Dorado across the top rope with the referee distracted, and the Captain's Hook gets the tap-out at 7:11. Post-match, Gulak offers a handshake to the victors. This was some painfully average wrestling. **

- Highlights of last week's Main Event between Hideo Itami and Akira Tozawa. Itami sent out a tweet that simply reads "I DESERVE RESECT."

- Mustafa Ali and Tony Nese are standing by with comments on the upcoming title match.

- Dasha Fuentes is backstage for words from Drake Maverick to hype the match. She asks him about TJP's comments. Maverick says to get where you want to be is to prove it in the ring, not on social media. He puts over Alexander's work ethic to become Cruiserweight Champion and Buddy Murphy steam-rolling his way into no longer being the best kept secret in WWE.

Except for a loss to Mustafa Ali in the 16-Man Cruiserweight Tournament, Buddy Murphy has been on a hot streak to earn the spot as the #1 Contender to Alexander's Championship. We're in Alexander's "home town" so that's always a red flag for any defending Champion. Murphy doesn't waste time taunting the Champion. Lockup and Murphy goes for the arm. Alexander flips through with a counter, but Murphy regains control, taking Alexander to the canvas with a wrist-lock. They trade leg sweeps and end up at a neutral position. They jockey for position with a waist-lock. Alexander with the hand-spring head-scissors, but Murphy ends up on his feet. They do it again, roles reversed, with the same result. Crisscross, Alexander sends Murphy to the outside with the head scissors. He teases a pescado, tricking Murphy to rush back in, but he had no intention on following through. Murphy sends Alexander into the corner and puts the boots to him. Alexander back drops Murphy to the apron and knocks him silly with a roundhouse kick. Alexander with a wrecking ball dropkick, sending Murphy into the announcer's table, followed by a tope suicida. Alexander gets cocky, taunting Murphy from the top of the table, allowing Murphy to sweep him off and ram him into the post.

Back inside, Murphy with kicks to the spine for two. Murphy sends Alexander from corner-to-corner. He's toned it down, but Alexander's vocal selling still reminds me of Lex Luger. Murphy with a snap mare and more kicks to the back for two. Alexander comes off the ropes with a forearm, followed by a European uppercut. He escapes a suplex attempt, hitting a spinning heel kick to the midsection. Murphy counters the springboard clothesline with a jumping heel kick for two. Murphy with running knees into the back. He tries it again but Alexander surprises him with a Super-Kick. They get to their feet, trading forearms. Alexander blocks a boot and hits a rolling elbow strike. Murphy tries to hold him back but gets hit with a spinning heel kick. He tries to escape to the floor but Alexander follows him out with a tope con hilo. Alexander rolls him back into the ring and springs off the top rope with a clothesline for two. Murphy catches Alexander coming through the ropes with a pump kick and hits his own tope con hilo, almost clipping himself on the table in the process.

Murphy rolls Alexander back into the ring and runs into a Michinoku Driver for a near-fall. Murphy dead-weights Alexander to block the Lumbar Check attempt. He flips through a second attempt and nails a charging Alexander with a boot to the face. He hits a running kick to the face and takes Alexander over with a running suplex for two. Murphy teases it from the apron to the floor but Alexander blocks. He rocks Murphy with a jumping roundhouse kick and spikes him on the apron with the flat-liner. Both men are laid out on the outside, but miracle of miracles, both beat the count back into the ring. Alexander gets the better of the forearm exchange and springs off the ropes, only to get caught in a Gory Special turned into a DDT for another near-fall. Both men crawl into opposite corners of the ring to regain their vertical base. They meet in the middle trading blows. Alexander with a flurry of strikes interrupted with a step-up enzuigiri. They trade more hard strikes until Murphy hits a jumping knee for two. Alexander counters Murphy's Law with a victory roll for two. Alexander blocks a boot and hits a Powerbomb for two. He pulls Alexander in with another knee strike for two. Whip to the ropes and Alexander springs off the ropes with the roundhouse kick, followed by the Neuralizer. Lumbar Check connects, and Alexander retains at 20:06. This took a while to get going, but it turned into a hell of a match. ****1/4

Final Thoughts: A wrestling heavy episode, including the highly anticipated (among the 17 205 Live fans) match between Alexander and Murphy. It's a Main Event worth checking out, making it a must-see episode. I'm not in love with the Gallagher and Kendrick tag team, or maybe they don't have the chemistry with the Luchadores that could translate into great matches.