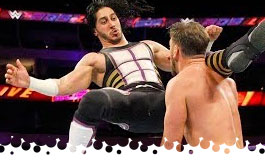 - Last week on 205 Live, Cedric Alexander pinned Roderick Strong to earn a spot in the Finals of the Cruiserweight Championship at WrestleMania 34. Tonight, Mustafa Ali battles former rival Drew Gulak to determine who will be joining Alexander in the Finals in New Orleans. Will the Lucha House Party get a rematch against Akira Tozawa and Hideo Itami? Will Drake Maverick light the fire under another poorly used Cruiserweight? Time to find out... right now!

- Presented LIVE on the WWE Network from Dallas, TX, with Vic Joseph and Nigel McGuinness calling the action, unless otherwise noted.

Looks like we are following up on last week’s match, where Hideo Itami pinned Metalik, and in the post-match, words were exchanged. Joseph says this is guaranteed to be a contrast in styles. Lockup into the corner and a clean break from Dorado, but Itami isn’t as courteous, driving a knee to the midsection. Itami with a side headlock and shoulder tackles. Crisscross and Dorado tosses Itami to the floor. He teases a dive, but handsprings to the middle of the ring and taunts. Back inside, Dorado controls with a side headlock. Dorado slides between the legs and takes Itami over with a head scissors. He sends Itami to the floor with a dropkick, hits a corkscrew plancha, and celebrates with a Lucha dance on the announcers table. Back inside, Dorado with a shoulder to the midsection and a second flying head scissors. Itami with a knee to the midsection and a charging boot, knocking Dorado off the apron. Itami follows him out, ramming Dorado’s back into the side of the ring. Back inside, Itami disrespects his opponent with boots to the face, followed by a hard slap. Dorado gives him a receipt and unloads with various strikes. Whip to the corner and Dorado connects with a spinning heel kick. Springboard body press, but no cover. He slaps Itami again. He goes for a handspring elbow, but Itami counters with a lariat for a near-fall. Itami with strikes, backing Dorado into the corner. He charges in, only to meet a super-kick. Itami gets sent to the floor again, out in front of the Lucha House Party™. Itami shoves Metalik, so Metalik shoves him into the side of the ring, drawing a Disqualification at 6:14. Post-match, Kalisto and Tozawa try to play peacemaker between Itami, Dorado, and Metalik. I think we’ll see more between these teams next week. Really good match ruined with a non-finish. **1/2 (would’ve been at least 3-stars with a pin-fall finish, even one with a handful of tights).

- Hype video featuring Drew Gulak. He’s a technical wrestler who doesn’t do high risk, and at one point became a comedy gimmick who boycotted the high-flying aspect of the roster and would tease the audience with PowerPoint Presentations. Drake Maverick told him to find the aggressive competitor he used to be, and in his first two tournament matches, displayed that very behavior, including a match against an on-and-off ally in Tony Nese.

- Cedric Alexander joins us from the Big Brother Confession Room to let us know that last week was the greatest moment of his career (so far?). It hasn’t sunk in yet that he’ll compete in front of 70,000 people. The road isn’t over yet, because it all means nothing if he doesn’t win the Cruiserweight Championship at WrestleMania 34.

TJP still has one of the most unique entrance themes in WWE. Johnson competed in the Cruiserweight Classic, according to Vic Joseph. I don’t remember him from that, but I think I’ve seen him live at an NXT house show a couple of years ago. TJP cut a cellphone promo about not caring who wins at WrestleMania (it could be Santa or Kermit the Frog for all he cares), just about who’s first in line, and it’ll be himself. TJP with a waist-lock takedown and leg sweep into a side headlock. Whip and TJP with a diving elbow. He catches a boot from Johnson in the corner, rocks him with an uppercut, and takes him over with a suplex. TJP with a drifting back suplex and slingshot senton. WE’VE GOT A DAB! TJP gets arrogant, giving Johnson a hope spot. He hits a somersault cannonball for barely a one-count. TJP with a basement dropkick to the knee. He takes Johnson over with a Dragon Screw, hits a roundhouse kick, Detonation Kick, and the Knee-Bar finishes at 2:39. TJP being presented as a serious contender is something I can get behind.

- Hype video for Mustafa Ali, former Chicago police officer and one of the best high flyers in the division. What separates him from the rest of the division is his heart. Just like everyone else, he wants the shot at being the Champion, but the other side sees it as a way to fix things: it’s about more than winning matches and an opportunity at WrestleMania. He has the opportunity to change someone’s mind. When they see his name, it’s a knee jerk reaction to boo him, and he wants to change that and not be labeled.

- Drake Maverick is unhappy with the finish to the match between Lince Dorado and Hideo Itami. He understands it’s WrestleMania Season, but people must keep cool and not lose their heads. Kalisto and Akira Tozawa kept order and deserve to be rewarded. Next week, they will compete against TJP and Buddy Murphy (based on his "impressive" performance) in a Fatal Four Way Match to determine the #1 Contender to whomever wins the Cruiserweight Title at WrestleMania.

Mustafa Ali defeated Jack Gallagher and Buddy Murphy (def. Ariya Daivari) and Drew Gulak defeated Tony Nese and Mark Andrews (def. Akira Tozawa) to earn their spots in the Semi-Finals. Gulak is one of the few heels to advance beyond the first round of the tournament, taking liberties on both his opponents along the way. Lockup and Gulak grabs a wrist-lock, throwing Ali to the canvas in the process. Ali flips through with a counter and transitions into an arm-bar. Gulak with a slam but Ali rolls through, keeping the arm locked. Gulak forces a break in the corner and they trade shoves. Gulak with a side headlock and shoulder tackle. Crisscross sequence (extended cut) ends with a shoulder tackle that doesn’t do much for either man. Whip to the ropes and Gulak presses Ali into the air for a crash landing. Ali with elbows to fight out of a chin-lock. Whip, Ali ducks an elbow and takes Gulak over with a flying head-scissors. Ali with a push-off dropkick. Gulak back-peddles to the corner to break Ali’s momentum and drives an elbow into the side of the face. Gulak with a clothesline to the back of the head for two. Ali catches Gulak in the corner with an elbow and rolls him up for two.

Gulak catches a springboard from Ali, hitting an electric chair drop into a cradle for two. Gulak with boots to the chest and face, trying to make Ali a permanent part of the canvas. Gulak pulls Ali to his feet by the jaw and gets slapped across the face for it. Ali blocks a boot and hits a spinning heel kick, followed by a pair of clotheslines. Ali with a leg sweep into some ground and pound. Gulak misses a charge and takes a boot in the corner. Ali with a forward roll into the X-Factor for two. Ali with boots to the head, giving Gulak a taste of his own medicine. Now it’s Ali’s turn to drive a series of boots into the chest. Gulak falls back, buying Gulak time to throw him face-first into the middle turnbuckle. Gulak grabs the Dragon Sleeper. Ali escapes with knee strikes but gets turned inside out with a short clothesline. Gulak pulls Ali to his feet and hits a pair of short-arm clotheslines. He covers for two, but Ali surprises him with the Koji Clutch. Gulak gets his legs under the ropes, forcing a break.

Ali to the top rope, following Gulak to the floor with a seated somersault. He tosses Gulak back in the ring as the crowd rallies behind Ali. He climbs the ropes again for the 054 splash, but Gulak shoves him off, causing Ali to take a hard crash landing to the floor. Gulak is content with taking the count-out, but Ali gets back on the apron at 9. Gulak with a knee to knock him back to the floor and throws Ali into the security wall. He rolls Ali back inside, but Ali rolls back out to "create separation." Gulak continues to pursue and pays for it, getting tossed across the announcers table. Ali launches himself over the table, diving onto Gulak and unloading with a flurry of right hands. Gulak is out on the floor, but Ali breaks the count and starts to disassemble the table. Gulak with a stiff shot to the ribs followed by a back drop onto the floor.

Gulak beats the count in, but he doesn’t want to win that way anymore. He picks Ali off the floor and throws him face-first into the post. He scoops Ali up and slams him into the timekeepers section behind the barricade. NOW he wants the referee to count Ali out. Ali makes the slow crawl back around and beats the count back in at about 9.9. Gulak moves in for the kill, locking in the Dragon Sleeper again, but Ali grabs the ropes. Gulak lifts him up for a powerslam, but Ali counters with a DDT, and the 054 Splash finishes at 15:11, sending Ali into the finals to take on Cedric Alexander at WrestleMania. Probably the best match of the Tournament (so far), with the clear face/heel dynamic adding a more compelling element to the match to go along with the storyline long motivation behind Ali. The near-count-out was a bit botched but can’t hold that against the work put in for the rest of the match. ****1/4

- Post-match, Mustafa Ali cuts a promo that it doesn’t matter what your name is or what the color of your skin is, but what’s in your heart.

Final Thoughts: 16-Men have become 2, and we now know it’s Cedric Alexander vs. Mustafa Ali at WrestleMania (as most I’m sure expected). Next week, we’ll know who their first challenger will be when peacemakers Kalisto and Akira Tozawa join TJP and Buddy Murphy in a #1 Contender’s Fatal-Four Way Match. With all tournament matches wrapped up (except for the Finals, of course), next week should be a good time to see how they fill out full shows without that crutch to rely on.