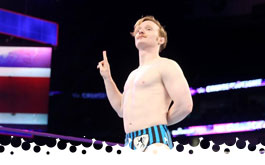 - Last week on 205 Live, Rich Swann and Neville have made it official that they will be competing for the Cruiserweight Championship at the Royal Rumble… The Brian Kendrick gloated about how quickly he would be victorious over Sean Maluta and almost lost multiple times throughout the match… Alicia Fox accidentally on purpose cost Cedric Alexander his match with Noam Dar, earning herself a one-way ticket to dumpsville… The never-ending rivalry between Jack Gallagher and Ariya Daivari appears to be coming to an end, holding a parlay to set-up their I Forfeit Match on this week's episode.

- Presented on the WWE Network from Memphis, TN. Mauro Ranallo, Corey Graves, and Austin Aries are calling the action from ringside, unless otherwise noted. We open the show with a recap video of the Jack Gallagher/Ariya Daivari rivalry that has been featured on 205 Live since the first episode. Tonight, things end with an I Forfeit Match.

I'm sure I'm the only one who caught it, but the ring announcer seems to have trouble remembering if Gulak is from Pittsburgh or Philadelphia. Alexander is free of Alicia Fox, or so he thinks, as she tries coming out with him, but he dismisses her as soon as he notices her trailing him to the ring. PLEASE. KILL. ME. NOW. Noam Dar makes his way to ringside to weasel his way into whatever the hell her outfit is. Gulak attacks from behind and Dar joins in on the fun. Alexander makes his own comeback, throwing forearms. He sends both men out of the ring and follows with a tope suicida. Gulak clips the knee and Dar puts the boots to Alexander while Fox's wardrobe falls apart. At least her boots are laced. No match, but my brain is hurting from hearing Alicia Fox scream for two minutes.

Wait... they're doing the match after all of that? OK, fine with me. Gulak meets a boot in the corner. I almost expected an immediate finish right there. Gulak goes for the leg, but Alexander shoves him off and connects with a dropkick that hurts his own leg. Gulak misses another charge into the corner and eats a roundhouse kick from the apron. Gulak blocks a suplex from the apron and dragon screw leg whips Alexander's knee trapped in the ropes. Alexander is way too loud when he's trying to sell. Gulak continues to punish the knee and even puts pressure on the leg when he goes for pin attempts. Little things, people. Alexander surprises Gulak with a spinning head scissors and sends him to the outside with a back drop. Alexander with a pair of clotheslines and strikes. Gulak with a headbutt to the midsection, and once again, a charge to the corner goes against him, this time meeting a rolling elbow. Alexander with a springboard split-leg moonsault for two. The knee gives out on a Lumbar Check attempt. Gulak from behind with a chop block and a tear-drop suplex with a bridge finishes at 5:49. Wow Cedric, you sure do a lot of jobs on 205 Live. Good match for the time given, and I'm STILL surprised they went on with the match after the pre-match shenanigans. **3/4

- Backstage, Noam Dar is pleased at the misfortunes of Cedric Alexander. Alicia Fox is still being crazy and slaps the taste out of his mouth.

- Hype video for the Cruiserweight Championship Match scheduled between Rich Swann and Neville to take place at the Royal Rumble. Neville made his debut on 205 Live following the Triple Threat Match at Roadblock, targeting Swann and TJ Perkins. His character motivation has been being overlooked and disrespected, and then they book babyfaces like Swann and Perkins to mock his physical appearance, basically proving that the terrible heel is correct, and we should be getting behind him. Had this video built up to a match on 205 Live, I would be more impressed, but being one of the lesser matches on the Royal Rumble makes it feel like it didn't need as much attention to detail in trying to set up a big encounter.

- Dasha Fuentes is backstage with Tony Nese. She asks how he's prepared for tonight's match. He doesn't have to train differently to be better than his opponent, because he's faster, stronger, and better. Is it me, or does the voice not match the look of Tony Nese?

I guess this could go either way, but it seems like Mustafa Ali has more momentum lately. Nese isn't too willing to accept the handshake this week. Ali with a hammer-lock into a snap mare and rolling crucifix for a one-count. He takes Nese over with an arm drag and hooks the arm-bar. Ali springboards off the top rope and takes Nese over with a head scissors. Spinning heel kick connects for two. Nese hides in the ropes but can't capitalize on a cheap shot. Ali to the top rope and Nese sweeps him off, dropping his body across the turnbuckle. Nese punts him into a fireman's carry and follows up with a stomach buster for two. Nese with some ground n' pound before hooking a body scissors. Ali fights back to his feet, ramming Nese with a pair of elbows. Nese trips him up running the ropes but misses a springboard moonsault. Ali with a shoulder to the midsection, followed by a clothesline. Whip to the corner, he nails Nese with a roundhouse kick, and somersaults in from the apron with a neck breaker for two. Ali avoids a charge to the corner and connects with a springboard Tornado DDT for two. Nese carries Ali into the corner and throws him into the turnbuckles with a release German Suplex. Nese pulls the knee pad down and hits a running knee to the face for three at 6:00. Surprised by the clean finish. Good action, limited amount of time, you know the drill.

- Tajiri is out with a knee injury, derailing his comeback. "We may not see Tajiri in action for quite some time."" About that... I think he makes another appearance, but I'll address it now, that Tajiri would be released from his contract shortly after WrestleMania (33).

- Another hype video for Akira Tozawa, this time with Apollo Crews as the talking head this week. He's COMING SOON! They seriously need a few more bodies on this show with all these guys trading wins and losses within two months of 205 Live's inception to the WWE schedule.

After weeks of back-and-forth attacks and trading victories, this is the end of the road for this barely warm rivalry. No handshake before the bell. Lockup to the ropes, Gallagher ducks a right hand and goes after the left arm. Daivari escapes with an elbow and Gallagher returns fire with an uppercut. Whip to the ropes and Daivari with a shoulder tackle. Gallagher quickly picks the ankle and traps the legs of Daivari, driving his knees into the canvas. Whip to the corner, Gallagher does the head-stand. Daivari fights the Umbrella (William) from Gallagher's hands and snaps it over his knee because he's a scoundrel. Whip, Gallagher ducks a clothesline and unloads with a series of rights. He follows Daivari out of the ring and gets dropped across the ring apron for it. Daivari with a chin-lock in the ropes, and surprisingly, that doesn't end the match. He tosses Gallagher to the floor and hits a neck breaker. Whip to the barricade and still no forfeit. Daivari wraps Gallagher around the post and dumps him back to the arena floor. Daivari slams him face-first onto the announcer's table and ties his turban to Gallagher's wrist, pulling him into a series of strikes. He ties both of Gallagher's hands behind his back, but he won't quit. Gallagher comes back with headbutts and somehow escapes his prison. He pulls out a new umbrella (William the 2nd?) and gives chase up the ramp. Daivari sends him into the stage set and lays him out with a lariat. Gallagher counters a piledriver and launches Daivari into the set. He smacks Daivari across the midsection with the umbrella, then shots across the back. Gallagher politely asks the announce team to move and throws Daivari onto the table. Daivari sweeps the leg of Gallagher, causing him to land across the table. Gallagher comes back with the running dropkick and he's got a THIRD UMBRELLA. He gives Daivari one last chance to quit forfeit, but he chooses to cheap-shot him with the microphone. Daivari with the Cobra Clutch. Gallagher fights free with William the 3rd and hooks an Umbrella assisted Chicken Wing for the forfeit at 14:18. This was fine, but I don't think their styles matched up for the gimmick presented. **1/2

Final Thoughts: That should be the end of the Gallagher/Daivari rivalry, and it ended as I expected: in a so-so match with tons of comedy from Gallagher. Neville and Rich Swann were both absent for the live audience, only featured in a hype video for their match at the Royal Rumble. The Love Triangle continues and Cedric Alexander does another job. One of the more skippable episodes, with neither a fantastic match or a fresh chapter to a storyline worth keeping track of.