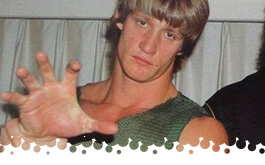 I'm back after yet another long lull. Let's see if I still remember how to type.

Probably the biggest "name" Jake has faced since his return/debut in World Class. Jake is in full-on Snake mode, as he waits in the corner while Strongbow tries to land a blow. Initial lock-up, and Jake SLAPS Strongbow, then turns to heckle a fan and receives a blindside chop. Jake tries working the arm, twice, but each time is tossed by Strongbow, then chopped. Jake has enough and slithers out of the ring to regroup. It apepars both guys are going in opposite directions on the card. Strongbow then works Jake's arm, while host Bill Mercer plugs World Class' Boston affiliate, WNXE. You may think: so what? But back in the day, it was a Big Deal for Your Town to get mentioned on a syndicated show. Strongbow keeps targeting the left arm, and Jake keeps trying, unsuccessfully to avoid him. Jake finally takes over by suckering Strongbow into the corner and kicking him in the gut. Jake with a snapmare, knee to the back, then a surfboard submission hold. Knee-drop, but only a quick 2 for Jake. He taunts Strongbow, the crowd and even referee Rick Hazzard, before settling into a reverse chinlock. Strongbow fights out and goes "on the warpath" with a series of chops, but misses an elbowdrop. Jake strike "like a cobra" with a pouncing clothesline, then hits the DDT for an easy 3 count, and an evil smirk into the camera at 7:40. Jake rips off the athletic tape on his wrists and chucks it at a groggy Strongbow. Jake looked like the real deal and it seems like both guys are headed in opposite directions on the card.

Marc Lowrance On-Location Interview with Stella Mae French Stella Mae pulls up in a tractor trailer cab, then introduces us to her new stick. It's lined with lead and has a special spot for both Gino Hernandex and "that broad" he runs with. A small 2 x 2 proabbly couldn't be filled with lead, but kayfabe-wise, this sells the lethality of it.

Gallegher appears to be without his PWI t-shirt, this week, so we can assume he's fallen down the Apter Rankings. Not sure if I've mentioned this, before, but after a brief appearance as a wrestler, Rick Hazzard is now refereeing. Gallegher hops over a backdrop attempt, hits the ropes, then both guys look out-of-synch and off-script. Irwin hooks in a headlock, then they try the same "hop over the backdrop attempt" spot, AGAIN. This time, Gallegher sticks to the script and hits a dropkick and an armbar takedown. They get to their feet, Irwin delivers a slam, but Gallegher still holds onto the arm. Irwin finally takes control with a series of clubs, a gut-wrench suplex and a flying knee-drop. Gallegher whips Irwin to the ropes, and now it's Irwin who hops over the backdrop attempt. Irwin bounces off the ropes and blasts Gallegher with a very convinving charging bicycle kick. Irwin smiles at the camera as he gets a nonchalanat 3 count at 4:55. Kinda' ugly with that early miscue, but I can't remmeber the last time "Wild" Bill Irwin has a solo squash win on World Class TV.

I'm freaked out, once again, because Jake is USING THE LOCKER. In fact, each locker has a piece of tape on it to indicate ownership. So next to "SNAKE", he see one labeled for "PYTs". Wait...those two guys only get ONE loocker?! Anyways, Jake gives one of his vintage, creepy, foreboding promos about the potential cost of underestimating someone. Luckily, he has the DDT. General Akbar is next, as he announces that Devastation, Inc. is targeting the six-man belts and that they've only eluded them due to preferential treatment given to the Von Erichs and Freebirds. He also touches on a recent challenge from Gary Hart for 5 minutes in the ring.

Strange introductions, as Marc Lowrance clearly announces Norvel Austin, but the camera focuses only on Koko. Austin still has his "MJ Thriller" jacket on, and Koko is shirtless, so I'm guessing that's why they slipped up. Commentator Bill Mercer wonders where/how Austin & Ware got the name "Pretty Young Things". He also mentions that Young also goes by the name "Sweet Brown Sugar". An early Irish whip to the corner is reversed, as Skip floats over, backdrops Austin, then blasts him with a dropkick to send him the to the floor. Austin takes a breather and an always helpful pat-on-the-back from his partner, returns, then gets clamped into with a standing side headlock, and a side-mare takedown to the mat. Austin then hits a stun-gun on the ropes to turn the tide. Yes, for you whippersnappers: yes, I just typed "Austin hits a stun-gun" with no connection to Stone Cold. Anyways, Austin looks gassed, drops an elbow for 2, then tosses Young through the ropes to the floor. A gentle charging shoulderblock from Austin sends Young back to the floor. Young staggers back in and eats some elobws and a nice shoulderbreaker. Austin whips him for a dropkick, and Young is out on the floor for the third time. Back in, Austin thumps some more and hits an atomic drop for 2 and then a side back-breaker. Austin stops the count at 2, hits another backbreaker and slowly climbs to the top for a flying bodypress. Young uses the momentum to reverse it, roll backwards and steal the pinfall at 8:08. Koko immediately runs in and the PYTs put the boots to Young.

Irwin and Von Erich lock up, but KVE twists things around and delivers a standing dropkick to the mush. KVE remains in contorl with a knee to the stummy, another drop-kick and a step-over armbar into a takedown. Adams comes in from the top rope to smack Irwin's arm. A quick double tag teases yet another KVE-Khan showdown, but Khan tags back out immediately. Good guys keep working on Irwin's arm, with Adams hooking a hammerlock. Adams then makes the mistake of tryingt o attack Irwin's boot with his chin and Khan is tagged in for some stompy/choppy action. Khan tosses Adams for a deliberate tag and now we get KVE/Khan. Second-rope elbow from KVE, then Khan hits him with a reverse thrush kick. The video is hacked and we appear to jump ahead by about 20 seconds, as Iwin is thumping away. Khan comes in an whips KVE to the ropes for a clothesline...and KVE sells it like he just had the top of his scalp removed at 80 MPH. Backbreaker gets 2 for Khan, then KIrwin comes in for a flying dropkick. The chants of "Go Kevin, Go" work well, as he reverses a vertical suplex and makes the hot tag to Adams. He cleans house with kicks, but misses an elbowdrop. Khan plants him with a nice piledriver and holds him for a second rope-shot from Irwin. Khan misses the Oriental Spike and we get another hot tag, this time to KVE. KVE backdrops Khan, then brings in Adams for a double-team drop-kick! Adams gets a chop to the windpipe and is worked over for about 30 seconds. Heck breaks loose, as we get a 4-way brawl. Akbar sneaks in to choke Adams with his headdress, allowing Irwin to set him up for the super-plex. Gary Hart then hops on the apron to knock Irwin off. Adams is quick to leap with a bodypress to get the 3 count at 10:41. Meanwhile, KVE hooks the IRON CLAW on Khan. Irwin and Akbar double-team Hart, until Adams and KVE clear the ring. Good main event with a hot crowd and quick, back-and-forth action. Devastation, Inc. looked like a cohesive unit and there was even some angle development.

No final wrap-up segment, nor closing graphics...so I'm guessing this was "shown in the best possible format, due to technical difficulties with the original recording.?

Why'd You Watch This?:
Maybe I missed it, but I don't think they plugged the upcoming Texas State Fair/Cotton Bowl Extravaganza. The first match is something of a deep dive that should be included on a "History of Jake Roberts" compilation. The main event was entertaining, but the two matches in the middle were kinda' stinky. As it is, I'm fine with using one of my cliche' phrase: this is another "day at the office" episode of World Class.