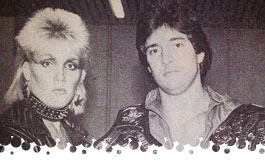 It's the "most famous rasslin' arena in the world", the Sportatorium in Dallas. Our host, Bill Mercer, promises some of the best rasslers in the world, including last week's "in case you missed it" main event. We're still in the mini "break from the Freebirds", as some other storylines are brewing and stewing. But with so much going on in World Class Championship Wrestling, let's get down to ringside for..

Yup, same match from last week's Main Event. Although I did leave out Mercer's commentary that mentioned Gary Hart wants to take out Akbar's Devastation, Incorporated and has signed on Chris Adams for that reason. "We'll see how that works out" says Mercer in a cautinary tone. Oh yeah, the ending of this match is still the same: Kerry wins by DQ when The Missing Link interferes.

The first official step in Hart's plan to take out Devastation, Inc. Collar and elbow tie-up, to the ropes, but Irwin gets in a cheap shot slap. They do it again, and this time Adams returns the favor...along with somersaults and flips to scare off Irwin. Close-up of Irwin and I forgot that he resembles James Hetfield, circa 1991, a bit. Excuse me: "James Hetfield-ah"! Adams with a leapfrog, hip-toss, dropkick and a reverse chinlock. During this downtime, Hart and Akbar stare each other down, at ringside, and it sounds like the fans are suprisingly chanting "go, Gary, go"! Back in the ring, Adams hits a charging shoulderblock, but then Irwin ducks n' dodges to send him to the floor. Adams stumbles back in, absorbs some shots, then hops out of a slam attempt for a reverse roll-up, off the ropes, for a near 3. That was enough action for awhile, so we get more chinlockin'. They hit the ropes and Adams remains in control with an armdrag into an armbar. Irwin catches him with a knee to the stomach and thumps away for a bit. Irwin tries the knee again, but Adams rolls over and gets another 2 count. More chinlockin' as referee Rick Hazzard admonishes Akbar, at ringside. Irwin takes over with some forearm blows, a clothesline, slam, and a charging kneedrop for 2. Adams fights back with some kneelifts, a drop-kick, tunrbuckle punches and his own kneedrop for 2. Irwin gets a nice gutwrench suplex for 2, but misses a charge into the corner. Adams whips him to ropes and hits the SUPER-KICK...but Akbar pulls Irwin's leg on the rope. Irwin delivers a bicycle kick and Hart apparently misses his cue, as Hazzard counts 3! Hart then reaches in, smacks Irwin, and Adams rolls him up for the pin at 12:36. Ring announcer Marc Lowrance says that the first 3 count didn't count, because Adams's hand was on the ropes. So Hart may not have missed his spot-- it may have been a misuce with the cameraman and Mercer's commentary. I'll go with that.

We get footage from a recent match against Ric Flair (in San Antonio, maybe?), when Hernandez used a foreign object, then Stella Mae ran in and smacked his legs with a 2 x 4. Up next is more recent footage of an American Championship match between Gino and champ Mike Von Erich. The cameras suddenly pan to the crowd where Stella Mae has been laid out by "the lady giant, Nicola Roberts" (the future "Baby Doll" in JCP). Roberts then goes to the ring, and smacks Von Erich with something, which allows Gino to plant him with a shoulderbreaker and regain the American Championship! Roberts and Gino briefly celebrate until the big brother calvary of Kerry and Kevin Von Erich arrives. The segment concludes with a quick promo of Gino saying: "revenge is ever so sweet". Well hey, Gino ending Mike Von Erich's championship reign is big news.

Somewhat funny how the graphics still bill him as "Wengroff", when he has a jacket that says "Weingroff". Jake's ring gear in this time period is kinda' funny-- red warm up pants with tan cowboy boots. Wengroff starts (mildly) strong with two dainty-looking slams on Jake. Jake then rolls out to the floor, selling a lower-back injury. One the return, he suckers in Wengroff with a short-arm clothesline, then hits several diving shoulderblocks to the back of Wengroff's left knee, working things to the mat. Mercer takes the lull to somewhat apologize for the messy ending in the Adams/Irwin match, then clarifies that Gino's new assistant will be known as "Andrea the Lady Giant". Jake tries a slam on Wengroff, but he fails and it turns into a 2 count for Wengroff. They hit the ropes and Jake catches Wengroff with a kneelift, then hits the DDT for the easy cover at 7:15. Okay, in his two matches on TV, Jake's DDT has been made to look devastating.

Set up by last week's main event, plus Kevin still has (low) simmering issues with Khan. The Brothers start quickly, tagging in and out, and wringing Khan's arm. Kevin then shows off by hopping up and delivering a flyin headscissors take-down. Kerry then comes in and applies a leglock, as they shift to working Khan's right leg. The tide turns when Kevin runs over to attack Link and is soon double-teamed. Link whips him to the ropes for a headbut (of course) and a double axehanlde. Khan comes in and hooks Kevin up in an over-the-shoulder backbreaker submission hold, but it ends kinda' sloppy. Khan misses a kneedrop and it's a hot tag to Kerry who delivers discus punches and hooks a sleeper. All four guys enter for a mini battle-royal and Akbar gets involved. Out of nowhere, Khan nails Kerry with the Oriental Spike and gets the 3 count at 4:33. Whoa! It's been awhile since ANYBODY in Devastation, Inc. has gotten a pinfall win over anybody of notice. Link is so excited that he runs over to the house mic and hollers: "yaaaa!"

Why'd You Watch This?:
The two big news items happened in a quick update segment: Gino Hernandez has regained the American Championship, and "Andre the Lady Giant" has debuted. Aside from that, it was somewhat suprising to see Akbar's goons get a pin, for once. The Irwin/Adams match was average, but had a messy ending.