Not sure how accurate this date is, but this appears to be the next sequential episode of World Class, right after the August 8 edition. It's entirely possible that the 22nd is actually the taping date, as I think World Class was running the Sportatorium every two weeks. Nevertheless, Bill Mercer gives us a very elementary rundown of tonight's card, taking place right below "the skyline of beautiful downtown Dallas, Texas". But with so much going on in World Class Championship Wrestling, let's get down to ringside for...

The Express is comprised of identical twins Brad and Bart Batten, who kinda' look like Gary Dell'abate from the Howard Stern Show. Sawyer appears to have gained the Texas Heavyweight Championship and has returned to his Big Poofy/Hairy Boots, since our last episode. Sawyer starts with a slam, almost knocking Brad out of the ring. Sawyer follows up with an easy gorilla-press slam. Brad ducks a thrid slam attempt and turns it into a roll-up, off the ropes for 2. An Irish whip gets reversed, allowing Brad to hit a backdrop and a drop-kick. Mercer starts to run down all the "great tag teams" currently in World Class, including such random teams as "Killer" Tim Brooks and the Grappler...plus Dingo Warrior and the unknown Socko. Borne comes in to receive his own backdrop and an armdrag. Borne uses a headbutt and a drop toe-hold to escape, but Batten works it into a hammerlock. Sawyer comes in and the Battens work his arm. Borne's in and they go after his arm....so I guess that's their thing: the Battens do armdrags and armbars. Just as I say that, they whip Borne in for a double reverse elbow... then back to the ARM. One Batten gets tossed out and Borne sneaks over to suplex him on the floor. Sawyer suplexes him back in, from the apron for 2. Double-team backbreaker as Sawyer tosses Batten onto Borne's knee, but only for 2. That was a pretty cool, yet simple move. Borne with a bearhug into a belly-to-belly. Batten tries to hit a high cross-body, but Sawyer catches him with a vicious looking powerslam. 2 count...and he pulls him up. Tag to Borne, who flies off the top with a sit-down splash (the future "Whoopie Cushion" if yer' into Doink) and that gets the 3. Sawyer comes in and decapitates the other Batten, just for the hell of it. I'm now sold on the team of Sawyer & Borne-- just two bruisers.

Pringle once again challenges Chris Adams on behalf of "Ravishing" Rick Rood. He then introduces his "answer to Abdullah the Butcher: Jos LeDuc"! LeDuc cuts a wide-eyed promo, saying he's been all over the world and is here to wrestle the best. Pringle then teases an ongoing rivalry with Gary Hart's men. 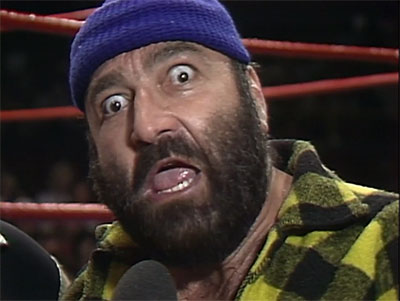 LeDuc no-sells a shoulderblock, then slaps on a headlock. LeDuc jabs, chops and chokes away on Jackson. Jackson fights back for a bit, but LeDuc just pounds away with double axe-handle (THE most appropriate move for a lumberjack like LeDuc). Coupla' kneelifts, a seated rear chinlock, big forearm shot, then LeDuc slaps on a bearhug to get the submission win. Your basic squash to introduce a new villain.

This may have been the first time these two matched up. Heel vs heel, but Warrior gets a nice ovation, simply cuz' he LOOKS COOL. Gary Hart is introduced immediately after, but he gets a chorus of boo's. Pringle gets incredibly animated and threatens to smack Hart with his cane, so Hart responds by threatening SHOE VIOLENCE. Dingo and Rood have a faceoff over who has the better mustache. Collar-to-elbow tie up and Rude easily slams Dingo. Rude tries to same sequence, again, but Dingo blocks and lifts him up into a gorilla-press slam. We should mention that Dingo really likes to holler, growl and yell a LOT; much more than his days as Ultimate Warrior. Rude takes a hop outside, as Hart gets the house mic and challenges Rude to an arm-wrestling contest. Rude gets the mic and says he'll only do it for $5,000. Now it's Dingo's turn: "is that all the money ya' got, Rood?! Why dontcha' double it, Mr. Arm-Wrestling Champion?!" They go down to the mat for the arm-wrestling, but Rood stalls, of course. Pringle interferes, right as they're about to lock-up, aloowing Rood to get a series of kneelifts to the back. Snapmare gers 2 for Rood, as he's then easily brench-pressed off and to the floor. Rude takes a breather on the outside, while Dingo gets the mic, again, saying something to the tune of "it'll take more than that to put the Dingo down". Rood tries a full Nelson and Dingo powers out. A big "Ding-o" chant breaks out, as the crowd is really into this. Rood gets whipped into the corner and sells it like he's taken a shotgun blast. In a fun, random, aside, Mercer calls Dingo the "world's ninth wonder". Another lock-up, with Dingo kneelift and clubbing Rood on the ropes. Rood reverses and knocks him down with a nice clothesline and a drop-kick. He goes for a piledriver, but Dingo flips him over. Rood racks the eyes, then a snapmare and a reverse chinlock resthold. Dingo elbows his way up and delivers another gorilla-press slam. Pringle and Hart suddenly start brawling, so Dingo grabs Pringel and pulls him into the ring. Referee Bronko Lubich throws the match out, ruling it a double disqualification. Rood stands in the ring with Pringle's cane, while Dingo shouts on the outside and threatens to chuck the ring steps. As a wrestling match, there weren't many moves, but they worked around Dingo's shortcomings and made an entertaining segment. The crowd was really into this and seemed to be eating it up. Combined with Rood's selling, Dingo came out looking an absolute monster from this match. I think the positive reaction to Dingo led World Class to turn him into a babyface. 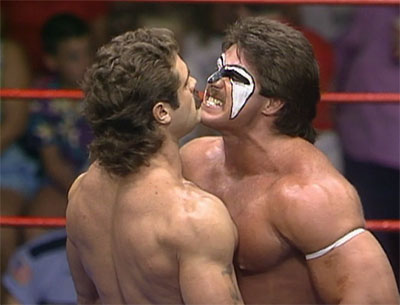 Lance Von Erich vs. The Grappler

You may chuckle that this is announced as the "main event", but it involves a "Von Erich" and Lance was fairly over, at the time. Quick lock-ups and Grappler takes it to the mat with a side headlock. They fight over waistlocks and hammerlocks to make Verne Gagne proud. Grappler underhooks Lance and gets a 2 count. They go into the Penultimate Knucklelock Challenge, until Grappler goes kicky/punchy. They blow an Irish whip, hit the mat a bit, then cross-cross (jump! jump!) with Lance delivering a backdrop. Grappler with some chops and a vertical suplex for 2. Kneelift, elbowsmash and a swinging reverse neckbreaker gets 2 for Graps. Lance with another backdrop. Minor brawling, then Lance comes off the ropes with a sunset flip, which is enough to get the 3. Very generic match. I guess the booker for the night followed "tradition" by having a "Von Erich" go over cleanly in the main event.

Why'd You Watch This?:
No doubt, the Dingo/Rood segment is the highlight. It's especially cool to see n' hear the typically pro-babyface Sportarium crowd getting into a heel-vs-heel match. The other matches are just there... but it is kinda' fun to see Sawyer and Borne demolish the Battens.