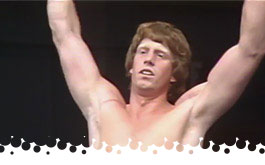 After a few months of rambling around with my reviews, it's nice to be back "home" with World Class. If you recall what happened in our last episode, Killer Khan ditched the Freebirds for the lucrative money of Devastation, Inc. The World 6-Man Championship is still very much a thing and we've also got Gino Hernandez galavanting around. In fact, Gino will be in tonight's main event, as he defends his American Championship against Kevin Von Erich. But with so much going on World Class Championship Wrestling, let's get down to ringside for...

Ralph Pulley is our ring announcer for tonight, subbing for Marc Lowrance. Link is introduced as hailing from "Lands Unknown"... across the bay from Parts Unknown, presumably. After a "big" win over Buddy Roberts on the July 21 epiode, I'm guessing Wengroff's (televised) winning streak ends at "1". Wengroff dodges Link's charges and performs a leg takedown, three times, followed by two one-legged drop-kicks to send him to the ropes. Link tries an Irsh whip, but Wengroff reverses it and hits a flying dropkick from the second turnbuckle. Link finally takes over with a variety of headbutts, including a flying version from the second rope. Wengroff bounces off the ropes with some shoulderblocks---and the fans are into it--- but Link rams him in the stomach, then quickly flies/spins from the second turnbuckle with another fying headbutt to get the pin at 3:22. Think it's been awhile since Link's pinned anybody of mention, so there's that.

Texas debut for the PYTs, who are sporting red leather jackets and rocking the Michael Jackson "Beat It" look. Seems funny seeing Ware playing the heel, while somebody else (Zumhofe) starts clapping and gets the crowd warmed up. They criss-cross (JUMP! JUMP!) the ropes until Ware hits a hiptoss, but Zumhofe kicks him away. Zumhofe knocks both PYTs into each other, then tags in Reed to work the arm. Zumhofe returns, especially animated, and works Austin's arm. Austin tries a slam, but Zumhofe reverses it and delivers two of his own. Austin finally takes over on Reed with an elbow, then Ware returns and hits a nice belly-to-belly suplex. Things slow down as Austin cranks Reed's arm. Decentt hammerlock slam from Austin, followed by a knee-drop. Leg lariat and then Austin dances to torque off the crowd. Ware and Reed bounce the ropes and hit each other's noggin. Hot tag to Zumhofe, who cleans house with multiple slams and drop-kicks. Austin gets shoved into Ware and Zumhofe covers for 2. Tag offs to Reed and Ware, but things quickly devolve into a 4-way brawl. Austin catches Reed in a bearhug, but Ware flies from the second rope with a clothesline and steals the pin at 9:48. Not a bad debut for the PYTs.

Before our next match, Ralph Pulley has a special announcement: Kevin Von Erich has been delayed in Phoenix, Arizona and will not be here tonight. In his place, he has autorized his brother, Mike Von Erich, to challenge for Gino Hernandez's American title.

They bounce off the ropes, until Strongbow scares Roberts away with the the threat of a chop. Roberts keeps stalling and complaining about hair pulls, finally locking up an arm-wringer, which Strongbow quickly reverses with a mat roll. Strongbow taks it to the mat and uses his legs to stretch the left arm. Strongbow remains in control with a few chops to send Roberts bailing to the floor, again. Roberts returns, bounces off the ropes, and is right back into Strongbow's armbar. Roberts finally takes over with a kneelift and some elbow-smashes for 2. A few chops and Roberts cinches in a reverse chinlock, allowing the fans to do some culutral misappropriation with the "war woop" chants. Roberts goes to the top and actually hits an elbowdrop! Swinging neckbreaker gets 2 for Roberts. Strongbow chops back and Roberts does a 1/2 Andre Special and gets one arm twisted in the ropes. Roberts punts Stringbow in the head to block a backdrop, then tosses him out through the ropes. Strongbow fights his way back into the ring, whips Roberts to the ropes for a reverse chop and scores the 3 at 12:15. Yeah, wayyyy too long for what they were doing.

Gino tries to take Mike to the woodshed, but walks into two armdrags and a dropkick. Gino hops out for a breather, then returns to eat a backdrop and another dropkick, before he's back outside. Gino gets a cheapshot, reverse elbow, but puts his head down for a backdrop and Mike's back in control. Mike hooks the sleeper hold, but Gino makes it to the corner and smacks him into the turnbuckle. Gino climbs up top, but Mike emulates brother Kerry by press-slamming him across the ring. Backdrop from Mike gets a quick 2. Gino fights back with some shots, a clothesline and a swinging neckbreaker. Gino goes all punchy/kicky, then delivers a vertical suplex, whip to the corner and the always nasty BITE. Another suplex, then Gino climbs up top... but is that Stella Mae French at the timekeeper's table? Nope...some other broad. Mike sneaks up behind and rolls up Gino for the suprising pin and becomes the NEW American Heavyweight Champion. George Wengroff, Buck Zumhofe and Skip Young run down to congratulate Mike. Gino, meanwhile, grabs the house mic and inspires a future Donald Trump by proclaming he didn't lose.

Egads... the story was that Gino wasn't concerned about Mike and I usually like the "rookie scores the unexpected upset win" trope. Yet this left a lot to be desired, as it was little more than a carry job by Gino. In one instance: after leap-frogging Gino, Mike stopped momentarily to decide what to do. The common assumption of this title win is that it was nepotism at its best, as the super-green Mike was pushed beyond his capabilities and booked to beat the top heel for the top singles belt. To make matters worse, while the crowd was okay with the win, they actually seemed more excited for Buck Zumhofe's antics in an earlier match. While Mike would get better, this is still a questionable decision. 1984 Mike Von Erich does NOT equal 1998 Bill Goldberg.

Also, unless I missed something, I have no idea why Gino is now worried about Stella Mae French. I'm guessing Jimmy Garvin has oficially left town and they're trying to transfer her over to Gino? Maybe?

Why'd You Watch This?:
After a series of strong episodes, one that was supposed to be A Moment fell flat. The debut of the PYTs provided some new blood, though.