Here we go-- it's the first-ever "David Von Erich Memorial Parade of Champions" from Texas Stadium, the home of the Dallas Cowboys! Well, it's not the entire show, but we'll get to experience (almost) everything, over the next few episodes. In a break from the norm, Marc Lowrance is our host and play-by-play man. He runs down what we'll see, tonight, including the premiere of the "Badstreet USA" video! Michael Hayes, Terry Gordy and Buddy Roberts have a pre-taped promo (probably taped the same time as last week's interview). They bust through a door (although Buddy has some trouble with the discarded frame) and tell us to keep it tuned in, so we can be the first to see this new video! But with so much going on in World Class Championship Wrestling, let's get down to ringside for...

The Junkyard Dog vs. The Missing Link (w/General Skandor Akbar)

It's the Battle of the Dudes with Hard Heads! I don't think there's been any build for this match on the World Class weeklies, but it's still a big attraction, as Dog was coming off of his famous Mid-South run. It wasn't unusual for World Class (or any territory) to bring in guys for one-time, big event, appearances. Link attacks before the bell, but JYD punches him through the ropes. Link kinda' gets tied up in his rope fall, so he comes back in and does out a different side. I don't think it was a blown spot, as Link's just an unpredictable Weirdo. JYD meets him with a chairshot, in full view of the ref, who quickly discards it. Link sends JYD, head-first, into the turnbuckle, but that trick never works. Link pounds him own head into the turnbuckle, for good measure. Both guys drop to all fours for a Duel of Headbutts, which JYD wins. JYD then hits his chin on a turnbuckle and Link takes over...so THAT'S how you work around the hard head thing! Link misses a diving headbutt, but Akbar distracts. Link conects with another diving headbutt, but this time Akbar holds JYD's leg so Link can make the 3 count. I would've pissed my pants if Akbar had said to JYD: "Haha! It's a Trap!" But wait... what's happening? second referee Broko Lubich comes in to override to decision and award it to JYD by disqualification. Yes, this was garbage from a technical standpoint, but considering both guys were known for HEADBUTTS, it was probably the best you could get out of such a match-up.

I don't think Parsons and Zumhofe have been dubbed "Rock & Soul", just yet. Criss cross (JUMP! JUMP!) to start, with Zumhofe delivering two hiptosses to SD1. Iceman and SD2 have some fun with armbars. Iceman drop-kicks and headbutts SD2 out, but things are pretty slow. SD1 and Iceman have a mini duel headbutting the turnbuckles, which would've been at home in the JYD match. Zumhofe is in with a flying headlock takedown on SD2 (sort of like "Sliced Bread #2", as he climbs the ropes with his feet and flips over), then a sunset flip for 2. SD1 comes in on a blind tag for a drop-kick and a backdrop. Zumhofe gets clubbered around, until SD2 misses a drop-kick and Iceman gets the hot tag. All four guys brawl in the ring, until Iceman and Zumhofe score stereo sunset flips for stereo 2 counts. Crowd loves that spot! Super Destroyers try a double clothesline, but Zumhofe trips up SD2 and Iceman lands the butt-butt on SD1 for the 3 count. We now have NEWWWW American Tag Champions! Maybe 8 minutes, and not a lot to it. Basic brawling, Zumhofe playing face-in-peril, and a finish that seemed to come from out-of-nowhere.

I think this was one of the first "real" music videos for wrestlers. By "real", I mean that they actually filmed exclsive footage of the wrestlers performing and acting in the video-- instead of the typical practice of splicing a wrestler's highlight clips with a popular song. There are in-ring highlights, but they don't come until the last minute. Being the dork that I am, this song still comes up on my personal music mix, nowadays, and I still like it. Later on in 1984, the WWF billed themselves as the "Rock n' Wrestling Connection"... but since it was all around Cyndi Lauper, they were actually the "Pop n' Wrestling Connection". Whereas "Badstreet USA" actually, y'know, rocks. The video may seem a little cheesy, but it's right in-line with 1984 standards. "Old Lady McDuffie" (not future Dolphins WR, OJ McDuffie) makes a cameo about 2 minutes in! I'd guess you could say the video is mix of Michael Jackson's "Beat It" Survivor's "Eye of the Tiger" video. Suffice to say: if you're a wrestling fan and haven't seen this, you should (I'd embed a YouTube video, but you know how tempermental and temporary those things are). 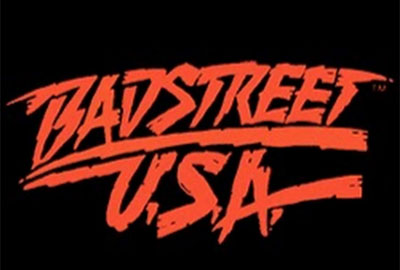 The Von Erichs fire up the crowd by brawling and clearing the ring. Gordy tries to toss a chair in, but referee David Manning has an annoucement: "there are no rules, but we'll only have ONE man in the ring". Gordy and Roberts, by the way, are wearing the thankfully forgotten 80's fashion trend of HALF-SHIRTS. There's nothing too scientific, as it's just each side tagging in n' out to brawl, while the opposition gets in either "saves" or "Cheap shots", depending on their alignment. Fritz squares off with Hayes, takes off his belt, and the place goes bananas. As Marc Lowrance accurately calls it: "Fritz is taking him to the wood shed". Even Gordy sells Fritz's shots like being hit with a bazooka. Hayes gets one of the few wrestling moves, with a whip and clothesline on Kevin. Roberts then comes in to...uhh...thrust his pelvis into Kevin's face. Oh wait...he's smacking Kevin's head with his deadly beltbuckle. Fritz returns and hooks the CLAW on Hayes, then simultaneously hooks one on Roberts! Boots come into play, as the 'Birds temporarily take over. Kevin suddenly leaps from the top with a flying bodyrpess on Roberts to score the 3 count. NEW "World" 6-Man Tag Team Champions... and yes, they get that big bowling trophy. The Freebirds are now officially 0-1 in "Badstreet Matches", which are supposedly to their liking. It's kinda' like the Undertaker going 0-1 in casket matches.

After the bell, everybody keeps brawling until a "huge Oriental man" (Killer Khan) comes in to attack the Von Erichs with the Oriental Spike. Kerry then runs in to helps his family clear the ring. Match was nothing special, but a prime example of how a hot feud or angle---with the correct build-- can pay off and deliver without being a mat classic. It may sound absurd to have an old dude in a powder-blue leisure suit thumping your top heels... but it works.

Marc Lowrance wraps up the episode from the locker room at Texas Stadium. He tells us that this event saw Kerry Von Erich winning the NWA World Championship from Ric Flair and we'll see that match, next week. Dude... SPOILERS?! Kidding aside, annoucing results like this was a pretty typical practice: keep the audience up on the latest "news", then show the match the next week.

Why'd You Watch This?:
All three matches are brawling garbage, but the last two were pay-offs to decent builds that had the fans invested. JYD/Link had no build, but seeing JYD was more of a special attraction and it seemed like a big deal just to have him on the card. In that regard, all 3 matches were definite "must sees" for World Class fans-- and wrestling fans, in general. If you were a fan of the day, following along week-by-week (or even someone binge-watching these on the WWE Network in 2019), you'd be highly entertained. Throw in the Freebirds doing the unthinkable by NOT embarassing themselves in a music video, and you've got a great viewing package.