As the show opens, Bill Mercer immediately plugs tonight's Main Event-- the Fabulous Freebirds will put their World 6-Man Tag Team Championship on the line against Devastation, Inc's trio of The Missing Link, Kamala and Super Destroyer #2. You know this is a Big Deal, because we even get custom hype graphics! Sure, the graphics are crude by 2018 standards, but ny no means am I mocking this-- this is absolutely awesome and I'm already pumped! 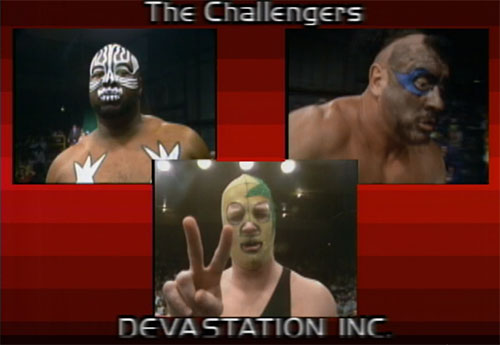 But with so much going on in World Class Championship Wrestling, let's get down to ringside for...

Mercer says that both guys are approaching this "scientifically", the old school indicator that we have two faces wrestling each other. Donovan gets a slightly bigger pop than Mantell, due to the womenfolk screaming. They go into a series of collar-and-elbow tie-ups, armbars, headlocks and wristlocks, each getting clean breaks. Donovan with a shoulderblock off the ropes, then side-mares Mantell to the mat. He works the headlock for a few minutes...and I'm suddenly suspicious that the match ending is being telegraphed. They get up for a criss-cross (JUMP! JUMP!) segment. Mantell gets a hip-toss, then Donovans takes it right back to the mat and some more headlockin'. I can't get a good picture of this, but there's a little kid in the front row, wearing his nice shirt, slacks, tie and a cowboy hat...watching intensely! They get to a vertical base, as Mantell takes over with some uppercuts, then a sunset flip off the ropes that ends up on the opposite side of the ring, nearly sending Donovan over the bottom rope and to the floor. A nice flying headscissors puts Donovan back in control...then back to the mat. Yeah, I think I know the ending, as ring announcer Marc Lowrance says we have one minute left. A reverse elbow gets 2 for Donovan. They try some roll-ups, with each getting maybe a 1 count...and then the bell sounds for the time limit draw. Dammit. I knew this was coming. Things got a little tempered at the end, but both guys shake hands to show no hard feelings exist. Definition of "time filler".

Just a squash, punctuated by a seemingly endless series of clubbing blows and kicks from SD1. A Headlock Happens. Whip the ropes a big boot for Super D1 for a 2 count. Dropkick from SD1, then he sets up Reed on the top turnbuckle for the super-plex, which gets the easy 3 count.

A pre-recorded sit-down interview with Bill Mercer at the World Class studios. Akbar has a warning for none other than Andre the Giant, who is on-track to return to World Class. He adds in some obligatory threats to the other WCCW babyfaces. Mercer brings up the pending return of the Great Kabuki, but Akbar plays it down and officially has "no comment". Mercer wonders which member of Devastation would face Kabuki, but Akbar doesn't want to talk about it. I really like Akbar's interviews, as he's no-nonsense and has a sinister tone to his delivery.

Kevin kicks Kiniksi out of the corner and gets a huge pop for such a simple move. They go into the Penultimate Knucklelock Challenge, until Kevin elevates the arms and hits Kiniski in the dome with a standing drop-kick. Now THAT was a nice move that got a deserved pop! As they fight over armbars, Mercer quietly slips in the fact that it's officially Kerry Von Erich who will be taking on Ric Flair for the NWA World Heavyweight Championship, soon. Meanwhile, Kevin rolls out of an armbar and delivers a slightly below average drop-kick to send Kiniski to the outside. They go to the mat, fighting over a hammerlock and a headlock. Kiniski with some shots, a kneelift, slam, but misses a kneedrop. Kevin accidentally eats tunrbuckle, allowing Kiniski to take over with a chinlock. Rest-hold, so you that's the cue for the "Go, Kevin, go" chant. Swinging neckbreaker gets 2 for Kiniski, the it's back to the chinlock. Kevin reaches up and applies the CLAW to the forehead! Kiniski stumbles to the corner and uses the ol' leverage move to send Kevin through the ropes and to the floor. Kevin's quickly back in and goes upstairs for a flying forearm, then a splash off the ropes for 2. Kinisky clubs him into the corner and applies...wait for it...the chinlock. Kevin slugs Kiniski in the throat and it looks like he spits up a litte. Second-rope dropkick from the second rope gets 2 for KVE. Slam and a second flying splash from KVE, but only for 2. They do an awkward robe rebound sequence, where Kiniski blows a clothesline, then...something...and Kevin ends up splayed on the ropes. Kiniski with a backbreaker and that gets 3! Referee Bronko Lubich immediately waves it off, as he saw Kevin's foot was on the bottom rope. Kiniski celebrates, so Kevin hits him with a dropkick in the back, then rolls him up for the real 3 count. Kiniski wants to brawl some more, but Kevin sends him packing. Despite the chinlocks from Kiniski, things were going fine until he blew the ropes moves towards the end.

The Freebirds have their big ol' 6-man trophy with them. As usual, we don't get the full entrances, due to music licensing, but I'm pretty sure the 6-man championship didn't have belts; just the trophy. Before the bell, Hayes threatens to smash into the Link, as things have already flared up. Okay, it IS a little funny that they've booked a wild match like this...and have 59 year old Bronko Lubich as the ref! Gordy and SD2 start, sizing each other up. To the ropes and SD2 with a dropkick. SD2 then eats a boot in the corner and the Birds get a doubleteam elbowsmash. Hayes gets thumped on by all three bad-guys. Doesn't last too long as Hayes get the upper hand on the Link and tags in Roberts. Link misses a diving headbut, but Roberts missed and elbow-drop, then gets to take some lumps. Drop-kick from Roberts on SD2 almost gets 3. Roberts ends up on the wrong side of town, taking an atomic drop slam from SD2, then getting pummelled by the Inc'ers. Hey, guess what? Kamala comes in to do some chops! Link gets an atomic drop on Roberts, but Roberts immediately hops out of it and delivers his own. Hot tag to Gordy, who beats away on everybody. Kamala thumps away on Gordy and chokes him on the top rope. Hayes keeps trying to come in, allowing Lubich to be distracted, while the Inc'ers get triple-team cheapshots on Gordy. SD2 puts his head down on a backdrop attempt, allowing Gordy to tag-off to Hayes. Hayes punches away on SD2, then all 6 guys are in the ring, brawling. Yup, must be time for the finish! Link flies off the top with a headbutt attempt, but "accidentally" hits SD2! Hayes makes the quick cover for the 3 count and the Freebirds retain.

Bill Mercer does his usual ringside wrap-up. Come back next week for Kevin & Mike Von Erich taking on Kelly Kiniski and Buddy Roberts.

Why'd You Watch This?:
First off, this episode has an asbolutely hot crowd. Sportatorium crowd were usually amped in this era, but egads are they hyped, here! It's no technical masterpiece, but I could watch Freebirds vs. Devastation for weeks on end. Just such a fun and bizarre feud! As for the rest: Kevin/Kiniski was okay, but sloppy at the end. Reed/SD1 was a basic squash and Mantell/Donovan was just...there. Still, the main event delivered great energy, so you can't complain. Oh, and Akbar's curious interview about Kabuki seems to be setting something up for the future. Nonetheless: I am entertained!