The first time I have ever seen; much less recapped; a full 1987 World Class episode. Which explains why I'm mentioning their "new" intro-- an animated version of the WCCW logo along with some video effects on the usual in-ring clips.The animation really isn't too bad by 1987 standards! Bill Mercer is at ringside to run down tonight's card, so that part's the same. Along with the small crowd. But with so much going on in World Class Championship Wrestling, let's get down to ringside for...

Adias is now totally heeling it up, complete with the opening stall job and trying to get in cheap shots. Simpson with a hip-toss, then takes Adias to the canvas to work an arm-wringer. Mildy cute spot, where Adias tries to get to the ropes, but referee Bronko Lubich pushes him back to the middle. So much for being ub-biased. An Adias Headlock Happens. They hit the ropes, Adias misses an elbowdrop and Simpson's back to working the arm. During the lull (aka: "entire match"), we can see the semi-famous front-row fan with the long curly hair and USA t-shirt; often referred to as "another Von Erich". Adias with a suplex, but the non-chalant cover only gets a tap. Adias stomps him into the corner, drops a knee, then a Chinlock Happens. To the topes, again, and Aidas lands a nice reverse elbow and a slam. Then... the Chinlock will not go away! Back to a vertical base and the ropes, but Simpson lands an awkward kick; he grabs the top rope and kinda' whips his toes into Adias. Whip and reverse elbow scores 2 for Simpson, followed by a monkey-flip for another 2. Slam, elbowdrop, then upstairs for a flying splash... but Adias gets his legs up. Adias is quick to hit his Russian Leg Sweep to score the 3. Two long chinlock segments, an awkward kick, but otherwise it was solid stuff.

Flashback from all of... LAST WEEK'S episode! I have no recollection of Jim Holliday; looks like some generic manager in a polyester suit. Joined-in-progress with Lance running the ropes. Nord is supposed to do the ol' "leverage to dodge and toss him to the floor" spot, but Lance looks like he's simply trying to walk through the ropes, on his own power. Brief brawl outside, then all 4 guys go at it, a chair gets thrown into the ring and it's a double disqualification. Nord tries to do a "Pillman-izer" on Lance's foot with a top rope legdrop, but Kevin Von Erich runs in to make the save. A weak dropkick from KVE clears the ring. Wow, even for a simple run-in, KVE looked pretty unmotivated. Red River Jack was Brusier Brody doing one of those "obvious masks" angles. 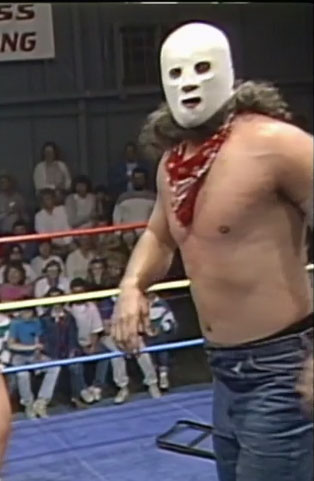 Back from commercial, Marc Lowrance has a backstage interview with Bruiser Brody. Brody talks about how Gary Hart's various men have sliced his grill open. He challenges Hart to bring his "mercenary", Jeep Swenson to the next Texas Stadium show; which will be the official return of Brody to Texas and World Class. Brody keeps up the ruse that Red River Jack is a completely different guy, of course. 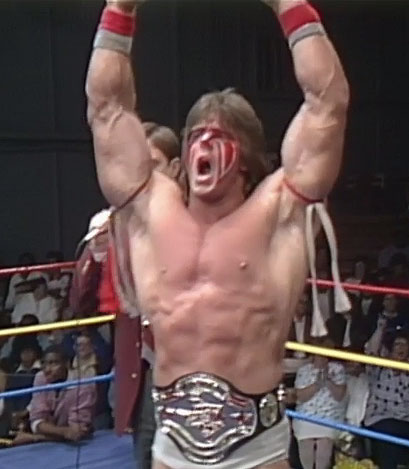 Warrior's polished his look, shaved his mustache, and is now looking and sounding like the guy we all remember. Mercer gets in a quick plug for the "World Class Girls, Candi and Sheri", who will be part of Texas Stadium's "Battle of the Most Beatutiful Girls" for $1,000 prize; whatever the hell that was. Dingo starts with a hollering side headlock, then whips Victory to the corner and delivers a headlock takedown. To the ropes and Dingo comes off with a "leapfrog" (all of 6 inches) and takes Victory back to Headlock City. Victory gets a few punches, but Dingo slams him and goes back to the headlock. Kneelift and chops, but Dingo misses a charge into the corner. Victory is all punchy/kicky, then chokes him on the ropes. Dingo with some stiff chops, but he tries to attack Victory's boot with his head. Dingo with a one-armed slam, but Victory rolls away. Victory returns the favor by trying to attack Dingo's boot. Dingo with a backdrop, tour de turnbuckles, vertical suplex and then his "finisher"--- a clothesline-- for the 3 count. Just a squash for Dingo, of the forgettable punchy/kicky sort. 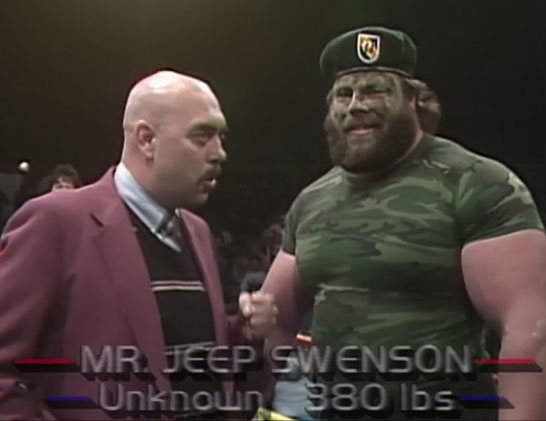 Swenson seems to be working an "evil Corporal Kirchner" type of gimmick. Swenson no-sells a shoulderblock, then clubs away on Wolfe. Wolfe foolishly tries a slam, but is easily gorilla-pressed by Swenson. Swenson tosses him around, slams, then decapitates Wolfe with a clothesline. Swenson scores 3 with the one-foot cover. To pad out the segment we get a video of Swenson working out, doing his "special forces training" and beating the crap out of bails of hay.

I had forgotten that the Fantastics returned to World Class for a spell. I always think that they only had the one 1984-1985 Texas run with the Midnight Express. Duck-under and Fulton floors Grappler with a drop-kick. Embry works the crowd and avoids the tag, while Fulton and Grappler go at it. Grappler takes over with a Greco Roman Eye-Boink and Embry finally agrees to tag in. He goes for an elbowdrop, but misses and immediately tags out to Grapppler! Grappler's basically fighting the Fantastics on his own...and it's getting great heat for Embry. Grappler gets the advantage on Rogers, handshakes Embry, but Rogers flips them both in, over the rope. Heel miscoummincation occurs, then they both get atomic dropped by the Fantastics. Embry takes a powder to ringside and threatens to leave, as a "sissy" chant breaks out. He tries to escape to the locker, bu Rogers pulls him back to ringside and hits him with a drop-kick. Things settle back into the ring and Grappler gets the advantage on Fulton. So, of course, it's safe for Embry to come in. He lands a clothesline, but misses a diving headbutt. Rogers with drop-kicks, all around, then all 4 men brawl. Grappler starts to clean house, but a third heel miscommunication spot, as Embry accidentally dekcs Graps with a flying clothesline. Rogers leasp from the top with a splash to pin Grappler. Just a heat vehicle for Embry, who walks around ringside with this "pouty face". Vintage old-school heel work. It's kinda' interesting to see how Embry's the focus of the match, yet he did so little in the ring.

Bill Mercer plugs next week's card, which will feature Kevin Von Erich taking on Nord the Barbarian. We can see behind Mercer that all 41 people have left the Sportatorium.

Why'd You Watch This?:
For once, there's something new worth looking at, but it's only the curiosities of seeing good-quality footage of Red River Jack and Jeep Swenson. So, yes, you can thank me for including screenshots on this very page! Otherwise, move along, nothing to see here.