After 5 years...the Saga Continues! Yup, thanks to the latest WWE Network upload, I'm picking up where I left off with World Class recaps, back in 2012! There appears to be a good chunk of stuff now available, all the way up to 1986. So, as it's been 5 years since I've been "in" on these episodes, I went back and familiarized myself with what had been going on in World Class. Somewhat. So I apologize, in advance, in case I repeat myself or miss a few details that we've already covered, here on Da' Site. As for World Class and THIS episode? Bill Mercer welcomes us and runs down tonight's card. It sounds like they have some piped-in crowd noise, blaring over Mercer's audio. It's been a few weeks since the David Von Erich tragedy, but things appear to be getting back to normal in the Sportatorium. But with so much going on in World Class Championship Wrestling, let's get down to ringside for...

Donovan's a bleached blond "totally 80's" surfer guy who's a little on the short side, but rocked up. Donovan works some armbars and uses a fireman's carry takeover to go to the mat. When they get up, Bond complains about a hairpull, to let us all know that he's the heel. They hit the ropes and, as Donovan drops down, Bond trips over him and eats canvas. They trade headlocks, but Bond appears to love the leg scissors, applying it every chance he gets. Donovan gets a wedgie and works the rest of the match with his trunks up his crack. Donovan gets a lame slam, but misses an elbow. Once more to the ropes, where Donovan bounces off, twice, and lands a flying high cross-body press to get the pin. There's probably a reason these two guys aren't well-remembered...

Adams is still the American Champion, but is without the belt as Jimmy Garvin recently stole it from him. Even though it's 1984, Kiniski's working sort of a throwback gimmick as a "scientific wrestler". He confounds Adams, early, with a series of hip-tosses. Adams is visibly frustrated, then bounces off the ropes to deliver his own hip-toss, then two drop-kicks to clear the ring. Adams brings him back in with a suplex, then they trade headlocks and head-scissors. Kiniski breaks his "scientific" morals a little, as he drops Adams, neck-first, on the top rope. Kiniski with a nice swinging neckbreaker for 2. They keep trading moves, back-and-forth, until "Gorgeous" Jimmy Garvin and Precious walk down to ringside...with the former wearing the American Championship belt! Adams hooks a crucifix pin on Kiniski for 2, then gets up to argue at Garvin. Kiniski uses the distraction to roll up Adams from behind for the 3 count!

Garvin enters the ring and gets the upper-hand on Adams, trapping his arms in the ropes. He taunts him with the belt, as he's kicking away. Finally, Sunshine has all she can stands and can't stands no more-- she enters the ring, grabs the belt... and whacks Garvin with it! Garvin goes to smack Sunshine, but Adams makes the save, then knocks out Garvin with the super-kick! Adams has his belt back, but Sunshine suggests they also steal Garvin's sequined ring jacket, gloves and leg-warmers. Fans are eating this up like they're at Fogo de Chao! Sure, Adams ate the pin, but it gave a decent rub to Kiniski and the real drama was with Garvin. Good segment, all around.

No relation betweeen these two..as far as I know. First time on WCCW TV for Butch. Mercer mentions that Butch played football with "Iceman" King Parsons, but they're not buddies anymore. Butch easily powers out of Mike's lock-up attempts, then lifts and tosses him across the ring during a side headlock. Mike gets a leap-frog and a headlock takedown, but Butch picks him up for a belly-to-back suplex. Butch with a flying fist from the second rope, some dancing for the fans, then a big gorilla-press slam. Butch finishes things off with a flying shoulderblock to get the pin. Fans were into Butch and he'd play up to them, at times, yet he wrestled with a lot of attitude. Add in the teased issue with Iceman, and I guess Reed's a heel?

Hayes gabs about all the "great" things in his life, then introduces a video package of the Freebirds, set to the tune of the "song that's tearing up the country-- Badstreet USA". Lots of footage of the 'Birds whuppin' up the Von Erichs... plus a segment where Terry Gordy shoves a ringside fan to the floor. 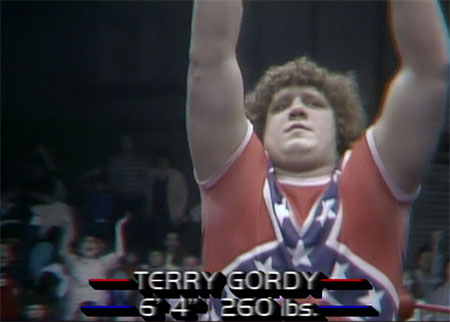 Well hey, I wonder if there's any issue between these two? Starts out fairly clean, but Kevin is deliberately slow with a rope-break and gets in a few jabs. Crowd is almost to the point of hysteria, screaming "Go Home, Freebirds" in unison. Kevin misses a charge into the corner, giving Gordy a chance to give the "hangman spot" on the ring rope. Gordy with two swinging neck-breakers, then applies the dreaded Oriental Spike! Kevin makes the ropes, but Gordy won't break. David Manning, of course, gets involved. Kevin gets dropped on the top rope, but blocks a punch and applies the Iron Claw! Crowd collectively poops their trousers. Kevin gets all intense, with a running knee-strike, and several chops. Gordy with a stiff clothesline out of the corner and it's an all-out brawl. Manning tries to get them to break, but both guys shove him off, drawing the double disqualification. Mikes Bond and Reed enter, only to get shoved out, as Gordy and Kevin keep brawling. Chic Donovan, Kelly Kiniski and even Bronko Lubich enter, but the scuffle continues! Michael Hayes finally comes out to calm down Gordy and escort him to the back. Nice, intense, pull-apart brawl. Barely more than a basic fight, but it worked.

Bill Mercer wraps things up and previews next week: when we'll have "Iceman" King Parson & Chris Adams against Jimmy Garvin and the Missing Link.

Why'd You Watch This?:
More "prime" WCCW. Both the main event and the Adams/Kiniski/Garvin segments are full of heat. The name "David Von Erich" isn't spoken, but everybody involved knows that he's very much a part of what's going on. I think things begin building up even more, as we get closer to May 1984 and the "Parade of Champions". By all acocunts, this was a great time to be a World Class fan, and you can still sense that energy, today.