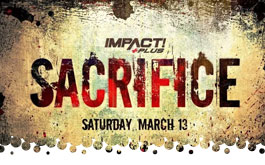 From Skyway Studios in Nashville, Tennessee. Our hosts are Matt Striker and D'Lo Brown. We are (hopefully) in the late stages of the COVID-19 pandemic, so there are still no fans in attendance.

Thornstowe locks up with Steve for some chain wrestling. Steve snaps the neck with his feet. Taurus and Luster tag in for a surprisingly agile showdown. Decay double team Luster with a tandem tilt-a-whirl splash. Steve avoids getting isolated and tags in Taurus for a tandem backbreaker on Thornstowe. Luster assists from the apron so Thornstowe can hit Taurus with a double foot stomp and back senton. Reno Scum enjoy an entertaining little heat sequence until Steve storms in on a hot tag. Steve avoids a DVD and fights out of a 2 on 1 situation. Thornstowe misses a leaping kick and hits Luster. Rosemary sprays green mist into Luster's eyes. Meanwhile, Steve cannonballs Thornstowe and serves him up for Taurus' Chaos Driver for the win at 7:45. Totally competent opener and a good win for Decay, **¼.
Winners: Decay

Kaleb with a K and Tenille Dashwood vs. Havok and Nevaeh

Kaleb is sporting a neck brace and a goofy grin. Tenille has no sense that her team is at a disadvantage and happily locks up with Nevaeh. Kaleb is healthy enough to help with a body slam, but misses an elbow drop. Havok tags in and kills Kaleb with a backbreaker/lariat sequence. Tenille retakes control with a suplex on Nevaeh and stretches her in the ropes while Kaleb films. Kaleb holds Nevaeh in the buckles while Tenille stomps. Neveah survives Tenille's chinlock and catches Kaleb with a swinging neckbreaker. Hot tag to Havok who dominates with kicks and power moves. Nevaeh returns with a sliding lariat on Tenille, but Kaleb reverses a roll-up to steal the win at 7:05. This was slight, but fun, **.
Winners: Tenille Dashwood and Kaleb with a K

Eddie Edwards pumps up Impact World Champion Rich Swann ahead of his title match against Moose. Eddie is confident that Swann is the guy to represent Impact against Kenny Omega at Rebellion.

Violent by Design (Joe Doering and Cody Deaner, with Eric Young) vs. James Storm and Chris Sabin (with Jake Something)

Deaner is all fired up and catches Sabin with a hard shoulder block. Sabin responds with a series of arm drags for a stalemate. Doering casually tags in and shoves Sabin down. Sabin opts to stay in the match and punish Doering with his quick kicks. Doering blocks a crucifix, and kills Sabin and Storm with a double clothesline. Storm recovers with an overhead belly to belly on Deaner, giving him and Sabin control. Storm gets caught by Doering's clothesline from the apron, and gets stuck in a dreadfully dull heat sequence. Sabin gets the inevitable hot tag and breathes some life back into the match running wild, and his flying elbow on Deaner gets 2. Doering catches Sabin with a crossbody block, and Deaner's diving headbutt gets 2. Enziguri by Sabin, but Young puts Deaner's foot on the ropes. Jake attacks Young, preventing a piledriver on Sabin. Doering brawls with Storm at ringside while Deaner and Sabin collide and take a breather. Rhino runs in and spears Sabin, allowing the easy Deaner pinfall at 11:31. VBD has a new member and stand tall. Dull match that overstayed its welcome, *½.
Winners: VBD

Brian Myers complains that he hasn't gotten the opportunities he expected in Impact, calling the company "lawless."

"Hold Harmless" is basically a cute way of saying "No Disqualifications." They can't wait to brawl at the opening bell. Atomic drop by Edwards and an overhead belly to belly forces Myers to retreat. Eddie attacks Myers' eye patch and hits a punishing slingshot plancha. Tope suicida by Eddie sends Myers rolling up the ramp. Myers sweeps out Eddie's leg to drop him on the ring steps. Myers hits a pair of gentle lid shots for 2. Eddie traps Myers on the top rope for a superplex onto a pile of chairs. Blue Thunder Bomb by Eddie gets 2. Eddie sets a table at ringside but gets ambushed by Hernandez. Matt Cardona runs in to even the odds and hits Hernandez with the Rough Ryder. Eddie grabs a kendo stick, but Myers hides under the ring for a clever cheap shot. Myers hits a neckbreaker on the ramp and lays Eddie on the table. Eddie pops up and puts Myers through the table with a backpack stunner! Eddie goes berzerk with a powerbomb and takes away Myer's foreign object and finishes with a loaded Boston Knee Party at 16:45! Decent brawl, but felt like a collection of hardcore tropes more than a true grudge match, **¾.
Winner: Eddie Edwards

Grace hits Hogan with a pair of shoulder blocks and then avoids a dropkick. Jazz tags and Tasha looks thrilled to be squaring off with her. Steelz flies into Jazz's arms and takes a Falcon Arrow. Grace throws Steelz and forces a timeout. Steelz plays a little possum and bonks Grace into the buckles. Quick hot tag to Jazz, but Hogan's distraction lets Steelz hit a cutter. Another hot tag to Grace, who properly runs wild with a Vader Bomb on Steelz, though Hogan breaks the cover with a frog splash. Grace double stomps Hogan to the canvas, but then gets caught by Fire N Flava's double stomp/neckbreaker combo. Grace answers with a facebuster on Hogan for a good nearfall. Grace and Jazz hit a tandem powerbomb, followed by Jazz's STF on Hogan, but Steelz breaks it up. Grace can't hit a Muscle Buster, and Hogan finishes with a swinging neckbreaker at 10:33. Entertaining match, despite a clunky moment here and there, **¾.
Winners and still Knockouts Tag Team Champions: Fire N Flava

Moose isn't in the mood for an interview. "I've done enough talking."

TJP can't help but target Austin's bandaged arm with a dropkick. Ace slows him down with a side headlock, but TJP reverses into an abdominal stretch. They trade head scissors and TJP sprints into a dropkick to the face. TJP misses a baseball slide dropkick and hits Fulton, allowing Austin to hit a plancha. Springboard knee strike by Ace gets 2. TJP escapes a Dragon sleeper and nails a springboard DDT. Dropkick to the floor by TJP and then a flying crossbody. Tornado DDT by TJP gets 2. Ace sidesteps a running knee and blocks an Octopus, leading to a frantic exchange resulting in stereo KO big boots. Flying guillotine leg drop by Ace gets 2. Ace prepares his extra sharp playing card, but TJP collapses. Ace looks for an easy Octopus, but TJP wakes up to reverse into a kneebar. TJP gets the ropes and they have another round of quick reversals until TJP hits a slick belly to back suplex. Ace hits a roundhouse kick to TJP on the buckles, but eats a high crossbody, but Ace rolls through for a double stomp and The Fold to win at 12:10! Good back and forth match with little downtime and some imagination, ***¼.
Winner and new X-Division Champion: Ace Austin

Johnny Swinger is hosting a makeshift casino in the backstage area. Tenille Dashwood and Kaleb with a K arrive but get a cold welcome from Alisha Edwards. They bicker and will have a match at some point. Swinger chomps on a cigar and loves it.

They lock up and ODB knocks Purrazzo down with a chest bump. ODB breaks a side headlock with a back suplex and dodges Purrazzo's pump kick. They exchange shoves and ODB delivers a Thesz press. Fallaway slam by ODB, but Lee interferes with a blatant kick. The ref ejects Lee and Susan. Purrazzo takes over the match anyway and works a Fujiwara armbar. ODB comes back with a power slam off the buckles. Hard Irish whips by ODB and a running shoulder tackle. Running power slam by ODB only gets 2. Purrazzo goes back to the armbar and then pulls back both arms for the Venus de Milo and ODB submits at 8:31. Overwhelmingly decent match, **½.
Winner and still Knockouts Champion: Deonna Purrazzo

Elisha Edwards and Tenille Dashwood barge into Scott D'Amore's office and demand a match against one another. He puts them in a six man tag match on Tuesday instead, they'll have to check the interwebs to find out who their partners are.

FinJuice are officially representing New Japan. Anderson aggressively locks up with Finlay. Juice gets a tag and helps Finlay swarm Anderson. Karl forces a tag to Gallows, who lariats Juice off his feet. The Good Brothers try to cut the ring in half, but Finlay gets a semi-hot tag. Finlay's hot streak abruptly ends when Gallows wrenches him off the buckles and follows with a vertical suplex. The Good Brothers effectively pick Finlay apart as the formula requires. Juice gets the inevitable hot tag and runs wild with energetic clotheslines and jabs. Double underhook slam by Juice but then he misses a cannonball. Gallows hits Juice with a KO kick for 2. Good Brothers hit Juice with a tandem neckbreaker, but Finlay breaks the pin. Anderson kills Juice with a spinebuster for a great nearfall. Juice desperately backslides Karl for 2 and lunges into a tag. FinJuice hit Anderson with a backbreaker/flying elbow combo for 2. Finlay catches Gallows with a dive and sprints back to help Juice hit a Doomsday Clothesline to finish Anderson at 14:36! Solid match that didn't stray too far from the Tag Team 101 formula, ***.
Winners and new Impact Tag Team Champions: FinJuice

Moose has been carrying the TNA title ever since he dug it out of a prop closet, and eventually Impact recognized him as a champion, even though Swann's title has a direct lineage to the TNA title. It's worth noting that Kenny Omega will challenge the winner at the next full-price PPV, so a shot at the AEW title is also on the line. Swann starts with a shotgun dropkick. Moose blocks a rana but Swann blocks a powerslam. Moose blocks a somersault senton and then a moonsault, but Swann thrusts him into the ring post. Moose is in trouble but manages to snap Swann's neck onto the ropes. Swann comes back with drive by attacks to the knee, but Moose answers with a back body drop. Moose pulls at Swann's hair while working a camel clutch. Swann throws a fiery punch, but Moose cuts him off with a uranage. Moose props a chair in the buckles, but the ref blocks him from using it. Moose throws Swann into different buckles to prove his point. Moose pulls Swann's hair through the rails. Moose grinds his fist and elbow into the ribs while working an abdominal stretch. Swann escapes by snapping the fingers apart, but Moose cuts him off with a fireman's carry gutbuster! Moose carries Swann to the top ropes but Swann reverses into a super rana! Moose bicycle kicks the spine, but his step up moonsault is countered by Swann's mid-air cutter! Moose kicks out at 1! 450 Splash by Swann gets only 2! They duke it out on the top rope and Moose surprises with a slick moonsault fallaway slam! Swann stumbles out of Moose's spear attempts, and he hits the propped chair form earlier. Swann puts Moose down with a crucifix and rolls into a jackknife cover for the win at 20:16! Stellar main event that built up to the big spots and climax, ****¼.
Winner and still Impact World Champion: Rich Swann

back to TNA/Impact Index