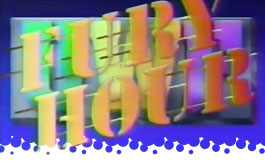 - Last week on the Fury Hour... The Wild Thing debuted... Andre the Giant mangled an LJN doll of Big John Studd in his only UWF Match... Due to lime limitations, Larry Zbyszko didn't debut and the feature match between Nikita Koloff and Ken Patera will resume this week... "Dr. Death" Steve Williams sent a message to "Mr. Wonderful" Paul Orndorff, leaving him broken and bloody. The referee who constantly got in the way escaped unscathed, though, until it turned into what looked like a shoot. To give a little insight, here's some tidbits from the Wrestling Observer Newsletter...

Also at the tapings, Steve Williams got into a weird altercation with the referee, as he was throwing jobbers around after a squash and hit the ref, who completely no-sold it. So, Doc kicked him and hit him with a chair to no effect, and the ref actually took him down in a shoot until Doc kicked him in the face to make him sell. ...and although all stories on what happened in the ring are the same, the dressing room aftermath differs. The second version of the story is the ref apologized afterwards because he didn't know about the run-in and no one filled him in. Williams laughed it all off, but then Billy Jack Haynes got involved and everyone thought the ref was going to be killed right there, until the situation defused.

- We open the show with a promo from Cactus Jack and "Wildman" Jack Armstrong, hyping a match with David Sammartino and "Chief Jay Strongbow". Regarding Mr. Armstrong, I don't know much about him, but I do recognize him from a few television appearances that lightly scrape the surface of professional wrestling. One was on the Nickelodeon show "Wild & Crazy Kids" where he, along with Prof. Toru Tanaka and some other guy did a Tug-o-War with a bunch of kids. The other was a quick cameo on an episode of Night Court where Bull becomes a professional wrestler and they do their best to expose the business as a work.

We're picking up where we left off last week, with this turd in progress. Koloff is selling a cheap shot to the eyes, but fends off Patera, at least momentarily, with elbows to the midsection. Patera eventually gets the better of Koloff, choking him across the ropes. Koloff makes the comeback with mounted corner punches. Whip to the ropes is reversed and Koloff staggers Patera with a boot. Koloff charges, but gets back dropped over the top rope, and the bell rings at 1:51, and the match is awarded by Disqualification to Koloff, because the UWF suddenly honored the NWA rules of not being allowed to throw someone over the top rope, even though Koloff's own momentum is what was responsible for the spot. We had to wait for the conclusion for a cheap finish... has there been ANY clean finishes in feature matches in the 9 weeks we've covered of this atrocity?

I'm setting the over under at 4-minutes, with my pick going over. Lockup into the corner and Orton with a forearm. Orton grabs a side headlock and comes off the ropes with a shoulder tackle. He sends Allen to the corner for a chest first bump and follows up with a shoulder breaker. Orton with a slam and stomp to the face. Allen offers some meager strikes, but Orton kills him with a short-clothesline. Orton comes off the ropes with a series of fist drops, followed by a flurry of short rights. He dumps Allen to the floor and rams his shoulder into the post. Orton slams him back into the ring and comes off the top rope with a fist across the back. He sets Allen up across the top turnbuckle and finally finishes with the Super-Plex at 4:31. Even Sammartino points out how ugly that suplex looked. These squash matches would be tolerable if they went anywhere.

Larry Zbyszko vs. The Bulldozer:

The self-proclaimed Living Legend is still carrying around the AWA Championship, even though the AWA ceased filming new content for ESPN during the Summer. Seriously, the balls of Abrams to have someone wear another companies belt on TV before establishing his own! With Sammartino on commentary, I wonder if we'll hear about Zbyszko stalking his backyard. The Bulldozer is a portly man and likely local talent. I use the term talent lightly, based on his appearance. You won't believe it, but Zbyszko stalls. Lockup to the ropes and David Sammartino shows up for an angle that certainly won't be advanced beyond this taping (Zbyszko signing with WCW at the turn of the year doesn't help, nor does bounced paychecks). Bulldozer gets a strike in the corner, but misses an avalanche. Zbyszko with a slam for three at 2:48. Easiest payday in HISTORY.

Whatever happened to that feud Blair had with Danny Spivey? Or with John Tolos? Is ANYTHING going to be followed up on?! Blair comes out to "You Shook Me All Night Long" by AC/DC. The Grappler is definitely not Davey Meltzer. Lockup and Blair with a waist-lock takedown. He goes for the arm, but Grappler makes it to the ropes. Blair with a side headlock into a hammer-lock and takedown. Blair with a half nelson into a pin for two. The smart crowd chanted something derogatory at Blair and chant for "Spivey" even though we'll never see Dangerous Dan. Suddenly, John Tolos and Bob Orton appear at ringside, answering my question at the top of the match. Blair traps the Grappler in an abdominal stretch, but let go after seeing Tolos. Grappler from behind with a school boy for two. Blair unloads with rights and a charging clothesline. Another distraction allows Grappler to cradle Blair for another two count. Whip to the ropes and Blair with a back drop. He connects with a back breaker and comes off the middle rope with a bionic elbow. Scorpion Death Lock finishes at 3:41. Post-match, Honey awkwardly keeps Tolos at bay with her stinger. Meanwhile, Orton lays out Blair and knocks Honey out with a headbutt. He's hardcore! He's hardcore! He's hardcore! At least her selling is better than her lack of ring presence during that whole exchange. Blair screams "God D---, you're dead meat, Orton!" Keep it PG, Blair.

- Come see the Universal Wrestling Federation on Thursday, December 6th. Greg Valentine's name is thrown out there. Was he already out of his WWF contract?!

- Captain Lou's Corner with "those dirty, rotten, scoundrels" Bob Orton and John Tolos. Albano is still selling Orton striking a woman (but what about Honey?). Orton says it was an accident and that he didn't realize he struck "the broad." Orton brings up "Women's lib" as if this were 1975 or something. Tolos says Honey isn't a woman, she's a Tarantula, and she walks around with a weapon like she thinks she's Zorro. I'm sure Zorro was a less-dated reference than women's lib in 1990 standards. At least they're not suggesting she's a cross-dresser. Tolos continues to preach as if he's failed an audition for a role on All in the Family.

- We replay an incident that took place on November 12th between Bob Orton and Brian Blair that could be used as an explanation for what took place.

The Viking vs. Stephen DeLeon:

Our friend Tony Halme (Ludvig Borga) is back, looking to destroy another jobber. After a quick online search, I guess Mr. Halme had almost zero professional experience, but him looking like a monster probably made up for it. One guy does his best to start a "Viking Sucks" chant. Lockup and Viking with a double choke lift and throw into the corner. He pounds away across the back with forearms and lays DeLeon out with a short-arm clothesline. Whip to the ropes and Viking with a side slam. Viking with a running Powerslam. Whip to the ropes and a gorilla press into a slam. He comes off the ropes with a series of elbow drops for the one-handed cover at 2:54. Post-match, the Viking comes off the ropes with another elbow drop. That'll teach these rotten fans!

- Andre The Giant has more words for the UWF and it's "Superstars." I'm sure this continued to piss Vince McMahon off to the point of offering Andre a spot in the upcoming Royal Rumble Match.

Main Event! Knockoff Bruno and Knockoff Strongbow should be a great combination. Can Cactus Jack carry three sh*t workers beyond a DUD rating? We see highlights from several weeks ago (November 5th, to be exact) when Cactus and "Strongbow" were going one-on-one. All four men brawl in the ring at the start. "Strongbow" lays into Armstrong with chops and the Jacks are cleared from the ring. Sammartino and Cactus start once things calm down. They trade blows until Cactus dumps him to the floor. "Strongbow" with a slam and leg drop on Armstrong for two. Rolling cradle for two. Sammartino works the arm while the crowd constantly chants for Cactus Jack. Armstrong catches David off the ropes with a slam and stomps away. "Strongbow" with a slight-delay vertical suplex for two. Armstrong tosses him to the floor, but this guy doesn't want to sell for anyone... maybe he really is related to the real Strongbow. He plants Armstrong on the concrete with a slam and suplex. Cactus tries to help his partner, but gets double teamed. Back inside, and the chaos continues. Armstrong looks to have bladed. Cactus smacks David with a chair to crowd approval. Armstrong's string of offense doesn't last long, and again is at the mercy of David and "Strongbow." Do these guys understand the basic formula of a tag team match? Cactus hits Sammartino with a clothesline that takes both men over the top rope. The crowd GROANS when Armstrong tags in. Cactus puts the boots to Sammartino and applies a Boston Crab. Larry Zbyszko shows up at ringside to taunt David. "Strongbow" with the hot tag and he dances around, no-selling. Chops for everyone! Zbyszko and Sammartino get into each other's face while "Strongbow" fights 2-on-1. Cactus nails Strongbow with a foreign object, and Armstrong covers for three at 11:00. DUD This was one ugly match. It's almost laughable that a no-name acting like Jay Strongbow doesn't sell for anyone. Even the real Strongbow at least sold occasionally.

- David Sammartino offered a challenge to Larry Zbyszko. We get follow-up comments from Zbyszko that throws in his face that he retired Bruno (Um...?) and accepts Sammartino's offer. I doubt we'll ever see that match. We also get more comments from Bob Orton and John Tolos, teasing Brian Blair over what happened earlier in the show.

Final Thoughts: The wrestling isn't good, and showing a bunch of squash matches with little direction just means boring television. We got something in the form of angle development with Orton physically assaulting Brian Blair's valet, but how will this be handled when we move on to the next set of tapings? The Viking is presented as an unbeatable brute, but what will his status be at the next tapings? David vs. Zbyszko? Good luck, since we probably won't see Larry at the next tapings, either. When things are being set up, it's hard to get excited when more than half the time, there's never conclusion to what they are building.