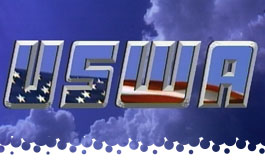 - Last Week on USWA Championship Wrestling... Jerry Lawler and "Mean" Mike Miller got into a fight around New Year's and Miller wore half-a-box of knock-off adhesive strips to sell the butt-whooping... Brian Christopher offered his hair to Jeff Jarrett, if he beats him at the Mid-South Coliseum on January 4th... Bill Dundee said goodbye to the studio audience and got into several brawls with the Masters of Terror and Mike Samples... Mike Samples and Leslie Belanger suggest Ms. Texas is really a man named Bubba Johnson, and he/she is having an affair with Eddie Marlin.

- Dave Brown and Corey Maclin (back from holiday vacation) are in the studio to call the action, conduct countless interviews, and send us to even more commercial breaks. This episode seems to be a bit shorter than last week, clocking in at 60-minutes with commercials, while the January 2nd episode clocked in at 67 minutes without commercials.

Christopher comes out with his companion Zeke Rivers and Mr. Clyde, and we can see, judging by the lack of hair on Mr. Clyde's head, that Jeff Jarrett was successful in defending his Southern Heavyweight Title at the Mid-South Coliseum. This is scheduled for 15-minutes, but I seriously doubt it will go anywhere near that long. Christopher cackles after successfully ducking a lock-up. God, that laugh makes me want to punch a poodle in the face, it's that irritating. Denucci has enough after the third time and drops Christopher with a dropkick. Whip across the ring and Denucci takes him over with a back drop. Back inside, Christopher with knees to the midsection. Crisscross and Denucci counters a leap frog with a spine-buster for two. Whip and Denucci misses a dropkick. Christopher gets a knee up in the corner and calls for a chair from Mr. Clyde, but heel miscommunication leads to Christopher being bopped with the chair, but a cover only gets two. Denucci with another (ugly) dropkick. Zeke Rivers trips him up (in front of the referee) and Christopher with a fist drop for two. We get a referee bump and now Christopher punches Denucci in the face with a chain. The referee sees a second chain in the ring, and the referee disqualifies him at 5:19!

- Post-match, Christopher chews out Rivers and Clyde for screwing up. Their job is to help him win, not screw him over. Ms. Davenport comes over to tell Christopher he's been a loser since associating with these guys, and has confidence he can win the title back from Jarrett if he takes her on as a valet. Christopher wastes no time dismissing the dynamic duds and agrees to have Davenport in his corner... and to put her hair on the line against Jarrett. She refuses to put her hair on the line for him, but she'll make sure he doesn't lose his hair. Christopher quickly turns sour on the relationship and says women are "good for nothing unless they put their hair on the line for me." Mike Samples and Bert Prentice wander onto the set. Prentice says it's time for Christopher to come back home, and they have the secret to beat Jarrett. Christopher says they'll put their hair on the line for him this coming Monday, but they decline on that part of the deal. He calls them a couple of women for wanting to use him for his money.

- Dave Brown is standing by with Richard Lee, the manager of the Moondogs. He points out the obvious that the Moondogs aren't here, but they're working out in the gym as we speak. He promised them that they get one more shot at the Tag Team Titles, and if they get in the gym and work hard, that Mike Samples in Bert Prentice won't cost them the titles. How? Samples, Prentice, and the Bruise Brothers show up and waste no time in attacking Lee. They throw him in the ring and one of the Harris Twins lays him out with a DDT. They take turns whacking him with chairs until Denucci, Jerry Lawler, and Jeff Jarrett spook them out of the ring. Samples says they better call 9-1-1 because someone died.

Jarrett is still the reigning Southern Heavyweight Champion, but this is clearly a Non-Title situation. Wolf attacks in the corner. Whip across the ring is reversed and Jarrett takes him over with a back drop. Wolf rakes the eyes and scoops Jarrett up for a slam. He climbs the ropes, and that proves to be a mistake, as Jarrett slams him down. Whip to the ropes, boot to the midsection, and Jarrett hops in the air for a DDT for the three count at 1:02.

- Jarrett makes his way to the announcer's booth to remind Christopher his day has come, and it will be his turn to lose his hair this Monday Night at the Mid-South Coliseum. Laura Davenport comes back out and says she and Jarrett have a common bond in hating Brian Christopher. She offers to be his valet for his match against Brian Christopher, but the crowd seems against the proposition. Jarrett says he's already beaten him enough times without the help from anyone else and turns down the offer.

- The USWA comes to Humboldt, TN on January 22nd, Jonesboro, AR on January 23rd, Blytheville, AR on February 5th, Harrisburg, ARK on February 11th, and Kennett, MO on February 12th. Jeff Jarrett, Jerry Lawler, and The Moondogs are advertised for the January shows. The USWA will be coming soon to Senatobia, MS, Marianna, AR, Hayti, MO, Ripley, TN, Ripley, MS, and Carruthersville, MO. Not a good sign when spell check doesn't recognize two of those cities. Those are the spellings on the screen, by the way.

- The USWA returns to the Mid-South Coliseum on Monday, January 11th! The opening contest will be "Nightmare" Danny Davis vs. Terror #2... Tony Denucci goes against "The Missouri Tiger" Jeff Gaylord... Danny Davis comes back for a second time, this time against Terror #1... Bert Prentice faces Ms. Texas... Ron and Don Harris defend the Tag Titles against the Moondogs... Jerry Lawler goes up against Mike Miller with a SPECIAL REFEREE... in the Main Event, Jeff Jarrett defends the Southern Heavyweight Title against Brian Christopher in a No Time Limit, No Disqualification Match. If Christopher loses, he gets his head shaved.

- We see highlights of Jerry Lawler vs. "Mean" Mike Miller from the Mid-South coliseum. Lawler is bleeding, of course. Referee Paul Neighbors is having trouble keeping the order, as they brawl at ringside. Neighbors holds back Lawler's arm at one point, allowing Miller to hit him with a cheap shot. The referee again intervenes, preventing Lawler from using a not that was handed to him by a fan at ringside. Even with the interference from Mike Miller, the match continued. Lawler took the strap down to start his big comeback, but Neighbors continues to get in the way, so Lawler decks him with a right hand. Lawler fights off Miller, Prentice, and Samples by himself until the Bruise Brothers come out, and Lawler is looking like the Undertaker at the '94 Rumble, fighting all of them off! The match eventually ends in a cluster-f*ck with the Moondogs and other babyfaces joining the battle.

- Jerry Lawler comes out with the USWA Championship and crown in hand. He apologizes for the sound of his voice, he has a head cold. He says Richard Lee is in the locker room and his shoulder is "messed up" and doesn't appear to be in condition to be at ringside Monday Night. Lawler took it upon himself to volunteer as the Moondogs manager in his place. With him as their manager, Lawler believes the Moondogs can't be beat. He can't wait to get in the ring again with Mike Miller. Nobody makes a name for themselves at the expense of his name. He's not here to win beauty contests, just to win matches and Championships. He would've beaten him half to death, but the referee kept stopping him. Lawler won't put up with the referee grabbing his arm and preventing him from knocking Mike Miller silly, so he brings out his own referee, BRUNO. Yes, that's WWF's Harvey Wippleman, and he will be the special referee for Lawler vs. Miller, this coming Monday Night, at the Mid-South Coliseum.

Laura Davenport is back, AGAIN, and she gives the same spiel looking to become his valet. Lawler beats around the bush before suggesting she's a dog. She slaps him around until he grabs her by her dress and threatens her physical harm until the trio of Mike Miller, Mike Samples, and Bert Prentice come out, but the baby-face locker room quickly empties to break it up. To make a long story short (too late), Mike Miller takes on Laura Davenport as his valet and vows revenge on anyone that lays a hand on Miss Davenport.

Bert Prentice takes over the segment, and says he found the doctor that did the surgery on Bubba Johnson, but Eddie Marlin won't let him disclose the name of that doctor because he's in bed with Mr. Texas. Meanwhile, Davenport is laying kisses on Mike Miller. We get another interruption, this time from Leslie Belanger, who takes offense to the kissing, and we get a catfight out of the dispute. Eddie Marlin comes out asking if they want to fight. Davenport says she wants to "fight the heifer" and Marlin says to sign the match... but it won't happen right now.

Any chance that Ricky has a brother named Willie? No, that isn't the easiest, laziest joke I've ever come up with. Ron and Don Harris waste little time attacking both their opponents. Norris gets dumped out of the ring and slammed onto the announcer's table. Inside the ring, one of the Harris' goes to work on Hayes, dropping a series of elbows. Whip to the ropes and they hit him with a double big boot. Powerbomb finishes at 0:56. Back on the floor, Hayes wakes up and gets laid out with a clothesline. The Harris Twins continue beating on both scrubs with a chair. Squashes like this make me like them a little, but somehow it didn't translate to the mainstream companies. Norris has done a blade job to sell the attack, and Eddie Marlin finally shows up, again, to break things up.

- We run down the card for Monday Night at the Mid-South Coliseum one more time as we wrap up another week of USWA Championship Wrestling.

Final Thoughts: This was even more of a talk-heavy show than last week, with only three matches, and two of them averaging to be 60-seconds each. The territory was known for using TV time to sell local events, and for the most part, the formula works. Considering the "southern" style of wrestling, it doesn't seem like there's many workers that the company can be built around without the gift for gab. The rivalry between Jarrett and Christopher reaches its apex and next week we find out whether we have a new Champion or a new victim of the Jarrett Shaved My Head Club. The angles between Lawler/Miller and Moondogs/Bruise Brothers continues, and there's tension between Laura Davenport (who became a bit annoying after so many appearances) and Leslie Belanger.