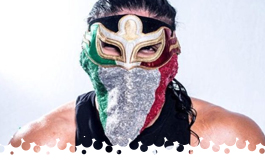 If I'm going to keep buying these PWG blu-rays, I might as well review some of them.

Taped August 1st 2021 in Los Angeles, California. Our host is Excalibur. This is the first PWG event since the COVID-19 outbreak. All the matches featured were kept secret until the last possible moment.

Deppen flips the fans off because he's a heel tonight, and they play along with chants for Cartwheel. Cartwheel blocks a kick and unceremoniously drops Deppen on his back. He then sends Deppen into the crowd for a nice tope suicida. The fans want more dives, so Cartwheel gives it to them. Deppen comes back with a knee lift to the gut. Jack uses his trademark cartwheels to gain an advantage and sweeps Deppen's legs. Jack slingshots into Deppen's boots. Deppen tries to build some heat, but Cartwheel keeps using his athleticism to block key moves. Deppen mockingly cartwheels across the ring to deliver a simple back rake. Cartwheel tries a corner splash but Deppen blocks with his boots. Jack hits another legsweep and slingshot elbow drop for 2. Jack misses a 450 splash, so they trade pump kicks. They exchange German suplexes, Jack hits a poison rana, Deppen answers with a clothesline. They take a breather before trading more counters until Deppen hits a Tombstone piledriver. Cartwheel blocks a Canadian Destroyer and nails a standing SSP for 2. Jack struggles but ultimately hits a deadlift Northern Lights suplex. Jack then hits a snap DVD, followed by a Sky Twister senton for only 2. Deppen blocks a SSP with a leaping kick, and his running knee strike ends it at 11:26. Good energy and effort in this sprint of a spotfest, and a fitting opener considering the very long hiatus, ***.
Winner: Tony Deppen

And now for something totally different. They shake hands before aggressively locking up. JD talks a lot of trash and puts his hands behind his back, and King takes him up on the challenge with a loud knife edge chop. They continue trading chops that would even make WALTER nauseous. King hits a body block and chops Drake out of the ring. They have a stiff ringside brawl until King puts Drake through a chair. JD responds by flinging King into the ropes for a clothesline to the face. Back to the ring, Drake gets some sustained offense to build his heat. King comes back with a Bossman Slam for 2. King struggles to lift Drake but ultimately hits a stuffed piledriver. Drake answers with a flying knee strike and they take a breather. They stumble up for another chopfest. JD hits a backfist to the face, followed by a Shining Wizard for only 2! King responds with a DVD into the buckles! Cannonball senton by King gets 2, and JD surprises with a Stunner, followed by his own cannonball. Drake misses a wild moonsault, but recovers for a lariat! JD tries again and hits the moonsault, but KING KICKS OUT! King desperately hits a clothesline and lands on JD for a nearfall. King hits one more clothesline and wins at 12:25. Really fun hoss fight with some interesting nearfalls and drama in the late stages, ***½.
Winner: Brody King

Flamita gets the first takedown, but Arez kips up defiantly. They trade wrist holds, with Arez rolling around on the ropes to counter. They trade rapid counters, sometimes in clumsy fashion, but get applauded for their stalemate. The match restarts with more fancy counters, until Flamita hits a nasty spear off the apron and into the crowd! Flamita goes on sustained offense to build some heat. Flamita teases a high spot but instead flips off the fans and stomps Arez. This blatant disrespect inspires an Arez comeback, who hits rapid consecutive dives to pop the crowd. Suplex on the wooden floor by Arez, but Flamita answers with a springboard moonsault to outside! They trade forearm shots until Arez hits a spear from the bottom rope. Standing Spanish Fly by Arez gets 2! Arez counters into a sitout powerbomb for 2. Arez hits a low 619, followed by an Arabian press for another 2 count. Flamita comes back and hits a 450 splash for a lukewarm nearfall. Arez hits a sloppy crucifix bomb for another frustratingly cold nearfall, and then hits a lungblower for a similar result. Flamita hits a muscle buster style lungblower but Arez kicks out again. Flamita nails a Phoenix Splash and wins at 15:41! Really pleasing high octane match as far as moves and workrate goes, but they didn't have the fans with them for the nearfalls, which deflated the final stretch, ***¼.
Winner: Demonic Flamita

And now for something totally different (again). They intensely lock up for the feeling out portion. Gresham shows off his technical prowess and gets some nice applause for his efforts. Moriarty is no slouch himself and is able to escape some tricky holds, but Gresham usually has an answer for him. They bonk heads, and Gresham overwhelms Moriarty with a leg sweep and dropkick to the arm. Moriarty begins selling an arm injury that prevents him from making quick covers, and relies on a body scissors. Gresham cleverly reverses into an ankle lock, but Moriarty answers with shoulder thrusts. Gresham uses his educated feet to dropkick Moriarty in the spine off the apron. Gresham then traps Moriarty on the canvas to continue punishing the bad arm. He wraps Lee's arms around his leg and pulls him into an unnatural position. Moriarty gets some space, and desperately unleashes a flurry of strikes. Gresham responds with an extra stiff avalanche back suplex. Despite being on the receiving end of the high spot, Lee rallies with desperation offense. Moriarty spins Gresham on his shoulders and hits a slam for a good nearfall. Gresham answers with a springboard moonsault, into a crucifix, into a crossface! Lee dramatically gets the rope break! They engage in a FIGHTING SPIRIT sequence and remove their medical tape for extra drama. Gresham rolls through Lee's crossbody for a nearfall, but Moriarty hits a mean lariat straight into an armbar! Gresham escapes for a mean German suplex, followed by running KO shots, finally winning at 23:34! This was downright ugly in the best sense in the later stages. Heckuva a technical war that transitioned into a nasty fight, ****.
Winner: Jonathan Gresham

The Lil' Rascalz (Trey Miguel and Myron Reed) vs. Rey Horus and Aramis

They start with a 2 on 2 slugfest, the Rascalz hit stereo enziguris to clear the ring. Aramis rushes back to prevent any diving, and reaches a stalemate against Miguel. Aramis offers a handshake, but Miguel responds with an enziguri. Aramis hits a flying body scissors takedown, but Reed returns with a scissor kick and then a guillotine leg drop. THe Rascalz swarm Aramis and the match finally begins resembling a tag team match. Aramis absorbs numerous double team attacks before delivering a desperate tornado DDT. Horus gets the hot tag and runs wild before the 5:00 mark. Aramis helps with a dazzling dive, and Horus hits Trey with a 450 splash for 2. Miguel answers with a sick neckbreaker/bow and arrow combo on both luchadores. Horus throws Reed at Miguel to break the submission. All four guys stay in the ring to trade chops while Jim Ross suffers a migraine miles away. Aramis powerbombs Reed onto Miguel for only 2. Miguel hits Aramis with a stuffed superkick and modified 619, then Reed helps for a combination somersault senton for a good nearfall. Miguel then slides on his knees while hitting a tope while Reed hits a more traditional tope. The Rascalz try to steal the Dudleyz' WASSUP spot but the luchadores block. Aramis struggles to find Reed but finds him for a dive while Horus powerbombs Miguel from the top rope to win at 11:16. Not the cleanest spotfest ever, especially noteworthy for the clunky finishing sequence, but still provided enough fun to be worth our while, ***.
Winners: Rey Horus and Aramis

Cassidy tries to put his hands into his pockets, but Uno insists on grappling, and lands a waistlock takedown. Cassidy is more interested in forcing his hands into pockets, and Uno hits a hurricanrana. Cassidy has no choice but to hit an armdrag and now he's free to put his hands where he pleases. OC shows off with his patented pocket offense, Uno offers a handshake as a last resort. Cassidy takes the bait, only for Uno to knock him down to stomp on his fingers. Uno is truly a cerebral assassin for biting OC's fingers. Brainbuster by Uno, but Cassidy answers with an inside cradle. Uno hides behind the ref to avoid the Orange Punch, and scores a cheap shot. Uno goes to his evil playbook again, but the ref stops him from choking with tape. OC marvelously considers tapping out after getting chopped. Instead, he tries a sloth comeback, but Uno hits a neckbreaker and flatliner for 2. Uno misses a senton, and OC IS READY TO TRY again. High crossbody by OC, followed by a tornado DDT. Uno blocks the Orange Punch, but OC hits Stundog Millionaire. Cassidy is too hurt to hit Beach Break, and Uno pulls him into a flatliner for 2. Referee Rick Knox is sick of Uno's antics and hits him with an Orange Punch, and Cassidy finishes with Beach Break at 11:09. Highly amusing comedy match with some clever psychology sprinkled in, ***.
Winner: Orange Cassidy

They start hot with rapid armdrags. They both try ranas, but they both land on their feet for a stalemate. Shotgun dropkick by Taurus, but Bandido pulls the ropes to send him outside for a quick tope. Taurus sprints back in for a Samoan Drop! Taurus hits a crazy corkscrew plancha to outside! Taurus slows things down and works over Bandido's knee. They trade open hand slaps but Taurus destroys Bandido with a discus lariat. Bandido answers with a SUPER RANA into the crowd! Bandido sprints into a pair of soaring planchas. Bandido follows with a Guerrero frog splash for only 2. Taurus answers with sling blade, crucifix bomb, and spear for 2. Bandido springboards into Taurus' arms and counters into a crucifix bomb. Poison rana by Bandido gets a close 2 count. Taurus no-sells and hits a devastating backbreaker for a mild nearfall. Bandido guts out a flipping powerbomb, but Taurus manages a mean lariat before collapsing. Taurus is up first and hits a TOP ROPE GORILLA PRESS, but BANDIDO KICKS OUT! Taurus tries to repeat the spot, but this time Bandido hits an AVALANCHE BLOCKBUSTER! Taurus kicks out! Bandido goes for a dive, Taurus blocks, but Bandido reverses a powerbomb on the floor! Both men are nearly counted out, before Bandido hits a swan dive hurricanrana! Bandido hits Go To Sleep, then a slingshot German suplex to win at 16:16! Totally unapologetic series of devastating MOVES and athleticism, ****.
Winner and still PWG World Champion: Bandido

Taurus and Bandido try to have a nice moment, but Flamita jumps Bandido. Taurus initially seems displeased, but then helps Flamita leave Bandido in a heap with a tandem lungblower. The lights go out, but it's only Super Dragon, and he joins in the beatdown. The lights go out again (is Tony Khan booking this?) and this time Malakai Black appears to a MASSIVE ovation. Black takes out Taurus and Flamita, and forces Super Dragon to retreat. Brody King slips in to hug it out with Black, and it looks as though the fans are going home happy.

Final Thoughts: Not much to say about this, just an easy, breezy show to sit through, full of talented wrestlers having high-workrate matches for the sheer hell of it. Sometimes, that's enough.