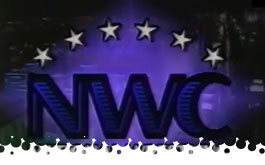 Not too long ago, I did a retrospective on the NWC (National Wrestling Conference), a small promotion based in Nevada that created a little buzz in the mid 90's before quickly flaming out once the market dried on available free agents with legitimate drawing power and a lack of homegrown talent to build around. Of course, NWC is probably best known for their short-lived relationship with Warrior, a.k.a. The Ultimate Warrior, a.k.a. Jim Hellwig, including one of his few in-ring appearances in a wrestling ring between his 1992 and 1996 WWF appearances. NWC's TV deal didn't last long, maybe 3-4 months, and I think was limited to the West Coast markets, so there's not a heck of a lot of footage out there. Why did I pick this episode? Give me literally 4-minutes and you'll know why this went into the "instant recap" file.

The show opens with "Get Ready for This" by 2 Unlimited (you've probably heard it in Space Jam and countless other sports related television and film), which I doubt had licensing rights cleared. Recognizable names in the open includes The Honkytonk Man, Virgil, Jim "The Anvil" Neidhart, Sabu, and Cactus Jack taking a chair to the face. NWC Slammin' is brought to us by Ultrazone, "The Ultimate Laser Adventure", KOMP 92.3 FM, "The Rock of Las Vegas", and Allstate Auto Marine & Electric repairs. T.C. Martin (the money man behind NWC) and Al Lorenz are standing by to run down what we'll see this week, including action from the NWC Tag Team Championship Tournament. WHO DOESN'T LOVE TOURNAMENTS?! Also, NWC comes to the Aladdin on October 7th for their anniversary show, with an advertised Main Event of Warrior vs. Jim Neidhart. CARD SUBJECT TO CHANGE.

Virgil vs. The Thug:

This is advertised as a "Grudge Match", and Virgil is credited as being one of the most popular stars in the NWC. I'm willing to accept one of those as truth but take a guess which. We immediately enter tasteless territory is "The Thug" comes to the ring WEARING A KLAN MASK. He's accompanied by someone in full Klan gear, as well. The best (worst?) part is the commentary team NO SELLS IT, like it's a common occurrence to dress up in KKK attire for cheap heel heat. "These two don't like each other." NO SH*T. The man in the full gear enters the ring and immediately unmasks to be Jim Neidhart. Thug and Neidhart double-team Virgil, and the referee seems completely incompetent, basically letting it go. HE'S COUNTING THEM TO FIVE AS THEY RELENTLESSLY DOUBLE-TEAM VIRGIL. The bell FINALLY rings at 1:07. The dastardly duo choke Virgil out with the sheet. This must be an inside job; the referee still isn't making much effort to break it up. The crowd "gets behind the very popular Virgil" (meh) as they dump Virgil over the top rope and hang him with the sheet. JESUS. F'N. CHRIST. Referee Jesse Hernandez finishes taking a dump and tries to help, and about an hour later comes "security" (a fat guy and a skinny guy with a Moe Howard haircut). In case you skipped all of that, they booked an angle where two white men in KKK masks simulated lynching an African American for heel heat. -*****

Bill Anderson (in the old Ken Resnick role of backstage promo hype man) is standing by to hype the show on October 7th. Jim Neidhart is here to hype the Main Event. He brags about what he did to Virgil ("I hear he's still hanging around!") and isn't impressed by Warrior's recent victory over the Honkytonk Man. Anderson calls it the "Biggest Main Event in NWC History." In the 30-second commercial that follows, we see "Honkytonk Man vs. Koko B. Ware" is on the under-card.

Commercial for "Warrior University." He's upfront and honest about his mantra that personality will get you further down the road to success. The long-dead phone number is (602)-566-4276, located in Scottsdale, AZ. I hope we get a commercial for his workout tape.

Johnny Psycho Paine is standing to challenge anyone to take him on. How is this guy shorter than the interview man? He rambles nonsense and teases attacking Anderson. We cut to comments from Bruce Allen from the "Out of Control Rock ‘n' Roll Show" on KOMP 92.3 FM that doesn't get me hyped for a match between a DJ and a midget Barbarian.

The Power Twins vs. Dreaded Paine:

Semi-Finals Match of the Tag Team Championship Tournament. Larry and David Power defeated the Bushwhackers in the 1st Round. Allegedly. Judge Dread and Johnny Psycho Paine make up the fittingly named "Dreaded Paine." Wait a second... did they spoil the result of this match when they did the promo spot from Bruce Allen in the previous segment? Paine rushes the ring like a goofball. Dread soon follows and we've got tons of fists flying. Paine chokes out a Power Twin with some ringside cables. WHAT A CLOSE-UP (of the Power Twin's bald spot). Dread sends David (or maybe Larry) Power into the corner and follows with a soft elbow. Larry (or maybe David) regains his footing and sends Paine into some front row seats. Paine whacks Larry (or is it David... and that wasn't me saying it, it was the commentator!) with a chair. Still waiting for a wrestling move. Wow, David took THE WORST IRISH WHIP INTO THE CORNER I'VE EVER SEEN. We get miscommunication from Paine and Dread. The Twins do the twin magic switch, and Larry cradles Dread for three at 4:08. This was the drizzling sh*ts. The Power Twins kept getting work on the Indy scene and I can't imagine why. Post-match, Dread and Paine get into a shoving match. Dread throws forearms and the crowd is in awe (or just dead for two goofs). -**

Bill Anderson is back with The Powers of Pain. Woah, The Warlord and Barbarian reunited! They're in the Tournament and get to face "Aerial Assault." This is the longest promo I've ever heard from the Warlord. These are some awful promo spots.

"The Best of the NWC" Volume 1: Total Chaos is NOW AVAILABLE, and the commercial features an ugly botch of a flying hurricanrana. We'll see the Desert Death Match between Cactus Jack and Sabu! The rematch in the Steel Cage WITH WEAPONS! IT'S TOTAL CHAOS! The Branding Iron Match between Terry Funk and Virgil! Interviews never seen on TV! More Sabu! ONLY $24.95!

Bill Anderson brings out the most disgusting human being in the company (Warrior?) and it turns out to be Johnny Psycho Paine. Again. Is that spit in his beard?! Anderson asks is Paine is "off his medication." Why is the interviewer trying to get himself over on the talent? I guess Paine physically assaulted him before. Anderson mouths off again and gets hit with a DDT on the carpet. "Another one bites the dust."

Aerial Assault vs. The Powers of Pain:

Our second Semi-Finals Tournament Match. Aerial Assault is the whacky combination of Bobby Bradley and ROB VAN DAM. I can't imagine the car crash we're getting with this blend of styles. Can we get one match that isn't deep in the negative stars scale? We can only hope. Barbarian and RVD start. Lockup and Barbarian quickly applies a wristlock. Whip to the ropes and Barbarian easily catches a body press and plants RVD with a powerslam. RVD avoids an elbow drop and barely phases Barbarian with a Super-Kick. Barbarian charges and goes over the top rope. RVD follows him out with an Asai Moonsault and the Aerial Assault with premature celebration. Warlord and Bradley in. Warlord wants a test-of-strength, but Bradley isn't dumb enough to accept. Warlord shrugs off a boot and sends Bradley crashing into the turnbuckle. Bradley flips over a charging Warlord but is turned inside-out with a clothesline. TC Martin calls the Powers of Pain "the veterans" despite Bradley having over a decade of experience. He attempts a crucifix cradle but Barbarian counters with a Samoan drop. Barbarian with a pair of back breakers, holding Bradley over the knee on the second. Warlord with boots in the corner. I don't think Bradley has executed one offensive maneuver in this match. Poor Bradley gets sent to the floor and introduced to the post. Back inside, Warlord with a back breaker for two. Whip and Barbarian with a boot to the face. He plants Bradley with a delayed suplex but RVD makes the save. Barbarian turns Bradley over with a Boston Crab and again RVD saves. Warlord in with a BEARHUG. Oh my GOD, how long is this match?! Bradley escapes by smacking the ears but can't get to his corner. I hope Bradley is paid double for this effort. Barbarian misses the flying headbutt, FINALLY allowing RVD to get the hot tag. He runs wild with awful strikes. Stick to the kicks, Rob. Crisscross and RVD with a jumping heel kick. He hits a twisting body press from the top rope to an out-of-position Barbarian. Warlord with a shot from the apron, allowing Barbarian to nail RVD with a big boot. Warlord throws the referee down as Barbarian plants Bradley with a Powerbomb, and we get a DISQUALIFICATION at 13:35. That long of a one-sided match FOR THAT FINISH? P*SS OFF. ½*

Bill Anderson is standing by, magically recovered from his brains splattered on the carpet. He introduces the "9th Wonder of the World", MR ELECTRICITY HIMSELF, The Warrior. He shakes Anderson's hand and dismisses him. Where's he been for the last 2 ½ years? He goes where he needs to answer the challenges of the Warrior. He's going to take the familiar ones back down to the dungeon where the Warriors have been hanging and banging. There are those that try to imitate and duplicate the Warrior, but there's no one that feels the power of the Warriors like he does.

MORE HYPE for the Anniversary at the Aladdin Theater on October 7th! The Warrior vs. The Anvil! Honkytonk Man vs. Koko B. Ware in a Battle of Memphis! Virgil vs. The Thug in ANOTHER Grudge Match! Johnny Psycho Paine vs Navajo Kid! Larry Powers vs The Original EARTHQUAKE! Don Juan! Superboy! Principe Hindu! Irish Assassin! Lady Victoria vs. Barbara Blaze! I love how the women are advertised last, after the prelim men. Also, meet Warrior at the Ultrazone at 1 pm that same day! CARD SERIOUSLY SUBJECT TO CHANGE.

Final Thoughts: Holy cow, this was some terrible stuff. The show featured a racial fueled angle for cheap heat, an undersized crazy heel getting cheap heat on an interviewer, an established tag team gobbling up an opponent for TEN MINUTES and still not doing a reasonable job, and bad promo after bad promo. I can't think of much that was worth complimenting. Warrior's rambling promo in the final segment was lightyears better than anyone else, only because of how poor the field was. After this sample of NWC TV, I'm not sure I'd waste my time watching another episode soon (which means I'm probably watching another episode tomorrow).