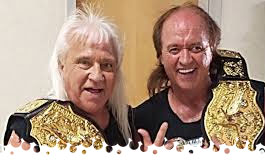 David Marquez interviews new NWA National Champion Aron Stevens, with the Question Mark, at the desk. Stevens is still wearing his karate gi and reminds Marquezn to look him in the eyes. Stevens says he's a dangerous man after 3 weeks of training to earn his Mongrovian black belt. The National title proves that he's a manly hunk of man, and demands the fans call him "Shooter Stevens" because he's actually a third degree National Champion. Colt Cabana interrupts and admonishes Stevens for hiding behind the Christmas tree throughout their match at Into the Fire. Colt stirs things up by saying that Stevens wouldn't be a champion if not for the Question Mark.

Thunder Rosa and Santa Melina come to the ring. Ashley Vox attempts an ambush, but Rosa quickly cuts her off. They prepare to stomp Vox's hand onto the ring steps when Allysin Kay and ODB makes a timely save.

Melina and Rosa confront Marti Belle for not helping them out. Belle argues she was ordered to stay out of it, but Melina accuses her of not having any common sense.

Galli and Bennett announce a tournament to crown a new Television Champion, culminating at the next PPV. Also, every match will have a 6:05 time limit!

Yes, that's CW Anderson of ECW fame. Dice is a heavily tattooed, bleach blond goofball, and Anderson plows him over. Everyone attempts sneaky pinfall attempts before everyone goes down on a triple clothesline spot! Anderson and Rinauro gang up on Dice. Sal hits Anderson with a Stunner and corner clothesline on Dice. Anderson hits Sal with a spinebuster, but Dice interrupts, shakes his pelvis, and finishes with his Snake, Rattle, and Roll neckbreaker at 2:02. Too short to really entertain or offend.
Winner: Zicky Dice

David Marquez interviews Zicky Dice at the stage. Dice speaks in a loud outdoor voice and says luck brought him to the NWA, but he doesn't need luck to become the Television champion. The Dawsons interrupts and take over the desk. They're mad about the Wild Cards ducking them on undelivered promises. Right on cue, the Wild Cards chase them off with chairs.

They cut right to footage from after Into the Fire with Marquez interviewing Marty Scurll. He's frustrated that everyone acted like they knew where he'd go, when in fact, he'll do whatever the hell he wants, and that means showing up in the NWA to make some noise. Scurll hasn't forgotten about the Crockett Cup, when he claims to have given Nick Aldis the fight of his life. He knows from the bottom of his broken heart, that he can beat Aldis and finally become World Champion.

Eddie Kingston joins commentary and gets on Galli's case for never having been in the ring yet voicing opinions.

Gibson locks up with Mosley and hits a shoulder tackle. Sims tries to interfere but runs into a hip toss. The RnR Express roll up both opponents for the win at 0:45. Quick squash that puts over the veterans' craftiness.
Winners: The Rock N Roll Express

Galli interviews the Rock N Roll Express at the desk about the trajectory of Nick Aldis after defeating James Storm at Into the Fire. Gibson says Aldis proved to many people why he's the champion. Galli wants to know what Aldis needs to do to be considered one of the greatest champions of all time, but Gibson isn't having any of that, and they leave. The Dawsons show up again and declare they aren't leaving until they get the truth from the Wild Cards. Another brawl breaks out.

The Wild Cards (Thomas Lattimer and Royce Isaacs) vs. The Dawsons (Zane and Dave)

Lattimer and Man Bun Dawson go right at it swinging fists. The Dawson avoids a double team, but accidentally chops the ring post. Lattimer stomps the newly injured hand into the ring steps and serves him up for Isaacs to isolate. There's not hot tag, as the Wild Cards finish with their DVD/Powerbomb combo at 3:03! Can I just say how refreshing it is to have a tag match where the heels isolating the face in peril actually leads to a finish? I am so happy that someone was finally brave enough to break the formula that every tag match I've recapped in the past 15 years has held on to. You should see the smile on my face.
Winners: The Wild Cards

The Wild Cards aren't finished and keep attacking the injured hand. Finally satisfied, they high five each other (with their HEALTHY HANDS) and go to the desk to tell Marquez that this is what happens when you tell lies! They're interrupted by the fans chanting for "Santa" as Jocephus shows up dressed as ol' Saint Nick and tosses gifts into the crowd. The Santa fan in the audience wants a hug, but Jocephus goes full Grinch and rejects him.

James Storm is interviewed after Into the Fire. Storm is frustrated that the whole world saw what Nick Aldis did, pointing out the gash on his forehead as evidence. Storm knows he may have to go back to the bottom of the pile and work his way back, but he is not done gunning for the World title.

David Marquez has Zicky Dice back at the desk for the introduction of the other tournament competitors: Ricky Starks, Caleb Konley, Colt Cabana, Trevor Murdoch, Thomas Lattimer, The Question Mark, Eddie Kingston, Tim Storm, the Dawsons, and even Nick Aldis. Most of the guys get a great pop from the live fans. Marquez then brings out Nikita Koloff to inspire the competitors. Fans chant "welcome back." Koloff says it's great to be back and is excited to see who will be the next to follow in his footsteps as Television Champion. They pull names out of a bowl to determine the first participants, and it's Starks and Kingston, who get right into each other's faces. Next names drawn are Cabana and Question Mark, earning a Pavlovian response from the fans.

Nick Aldis and Ricky Starks remain at the desk with Marquez. Aldis assures us that no one can take his World title unless they're ready to be as committed to the NWA as he is. Aldis says he's put himself into the TV title tournament because he has "no more challenges left" which gets the "Marty" chant I was hoping to hear. Aldis puts Starks over for being his top draft pick in wrestling, who could even dream of making it to the tournament finals to lose to him. Aldis has nothing to say about Scurll, because he's been building the NWA on his back, and now suddenly guys are coming out of the woodwork to make a name at his expense. Also, Aldis didn't hear what Ricky Morton said about him earlier, but he's sure it was complimentary. Marquez can't help but ask about Kamille seemingly not being allowed to speak again, and Aldis announces that she is no longer his insurance policy. I could listen to Aldis riff on his competition and fans all night.

Stu Bennett sits down with Marty Scurll to talk about his intentions in the NWA. Scurll says he got a taste of the NWA back at the Crockett Cup and it reignited his passion for professional wrestling. This interview doesn't really go anywhere, I may have advised them to cut this.

Tim Storm joins commentary to talk about what Nick Aldis should do next. Storm admits he wants to see Marty Scurll get a shot and feels he'll earn it quickly.

David Marquez hosts Eli Drake at the desk. Drake can barely talk after getting Pillmanized by Mr. Anderson at Into the Fire. Drake thinks it's a little funny that he wasn't included in the TV title tournament, which is a great point. First, he's going to punch Anderson's ticket in their no DQ match.

Bell rings and they immediately exchange haymakers. Crowd chants "Let's go, Eli" as he absorbs a knife edge chop and reverses a hard Irish whip. Drake clears Anderson from the ring and smashes him into the stands. The fans are enjoying this so much, it's infectious. They reach the rafters and Anderson throws Drake to the ground. Drake blocks getting thrown into his own poster on the wall, and takes a selfie while pushing Anderson's face into some cables. Anderson recovers and rams a steel door into Drake's face. Anderson takes control as they head back to the ring. Anderson sets up a chair for a repeat of his attack from Into the Fire, but Drake blocks the Mic Check and hits a drop toe hold into the chair! Drake hesitates on a chair shot and hits Gravy Train instead for a high ground victory at 7:02! This was tons of fun, ***.
Winner: Eli Drake

Immediately after the match, Nick Aldis storms to commentary to confront Tim Storm and chews him out inaudibly. Storm has a passionate rebuttal and storms into the ring and challenges Aldis to do something about it. Aldis answers the call and they trade shoves, but the Wild Cards run into attack Storm! Aldis stands back and watches Storm get his ass handed to him. Is this all because Storm wouldn't tow the company line by endorsing Marty Scurll? Kamille interrupts and gets into Aldis' face, only to turn around and spear Storm! Kamille then makes out with Lattimer! Aldis, Wild Cards, and Kamille hug it out. I would daresay this ends Aldis' status as a tweener, and this counts as a full blown heel turn. Crowd boos them heavily.

Final Thoughts: This succeeded as a reset show after Into the Fire and nicely sets the stage to build up the next PPV. I love the numerous, complex, and nuanced story threads that are being told up and down the card. I can't recommend this show more.