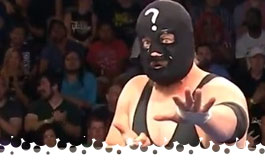 From GPB Studios in Atlanta, Georgia. Our hosts are Jim Cornette and Joe Galli.

David Marquez hosts the Rock N Roll Express at the desk. Morton is excited to see Homicide and Eddie Kingston get their shot at the tag titles. Gibson says the NWA is #1. Outlaw Inc join them and are humbled by their stamp of approval.

They lock up and Murdoch scores first with a tackle. Conley answers with a dropkick. Murdoch counters a charge with a double legged spinebuster. Murdoch continues to rough Conley up with power slams. Conley counters with a double stomp to the chest. Conley's back leg sweep sets up a senton to the gut. Conley trips Murdoch to hit another double stomp for a good 2 count. Murdoch comes back with a half nelson slam. Murdoch's flying bulldog finishes at 3:40. Perfect TV match with well paced action and no filler.
Winner: Trevor Murdoch

Joe Galli hosts Aron Stevens, who is dressed as a pirate again, at the desk. Stevens angry and declares that he is no longer a part of the NWA or professional wrestling. He will go put on some pants and confirm on his phone a new starring role in some nonsense. Stevens officially quits!

Belle starts and quickly finds herself double teamed in the corner by the blond jobbers. Belle breaks a wristlock and tags in Rosa, who lights up Creed with knife edge chops. Rosa's lariat in the corner sets up a slingshot dropkick. Rosa knocks Rose off the apron and kills Creed with a shotgun dropkick. Rosa's double stomp finishes at 1:35. Great squash for Thunder Rosa.
Winners: Marti Belle and Thunder Rosa

David Marquez hosts Belle and Rosa at the desk and wants to know why they joined forces. Belle says she doesn't know much about Rosa, but wants to move on from her past. Rosa cuts a Spanish promo and Belle translates. The bottom line is that Allysin Kay doesn't know what's coming for her.

James Storm rants and raves about Colt Cabana robbing the National title from him.

David Marquez hosts new National Champion Colt Cabana at the desk. Colt can barely contain his excitement to be champion again, and imitates Oprah to suggest that everyone gets a championship. Ricky Starks interrupts and is clearly eyeing the title belt.

Dan Parker vs. ?The Question Mark?

Crowd likes the Question Mark immediately, as he's a kind of generic looking masked guy with exaggerated body movements. The Mark quickly takes control with a chop to the back. Parker's flurry of offense goes nowhere as The Mark cuts him off with a missile dropkick. The Mark hits a hard palm strike to the face and gains the pinfall at 0:57! Crowd thinks this great. Okay squash.
Winner: The Question Mark

Clips of Thunder Rosa training for and arriving at her MMA debut. This ends up being a teaser for a longer documentary coming soon.

Cornette and Galli continue speculating about why Kamille won't talk. Eli Drake interrupts at the desk and is tired of this subject. Drake says the reason why Kamille won't speak is because she might admit that he can take the World title from Nick Aldis. The Wild Cards interrupt. Lattimer doesn't like Drake sticking his nose in their business. Drake argues he is minding his business and could make Kamille squeal if given the chance. I'm a bit lost on why the Wild Cards care. Mr. Anderson interrupts and startles Drake with his loud noises. This was all very confusing.

Billy Corgan thanks the fans for coming to NWA tapings and making the show a success. He promotes the NWA Email list, which allows fans to get first opportunities for tickets, and he teases that we will want to get on board now, because bigger things are coming.

At Tony's Faulk's wrestling farm, they grow heels and babyfaces. This is delightfully demented and out of left field.

Joe Galli hosts NWA World Champion Nick Aldis at the desk and asks for his opinion about a possible conspiracy going on in the NWA. Aldis wants to remind all the guys in the back that the wrestling industry owes them nothing. He got to present Dory Funk Jr. with an award and stand side by side with the late Harley Race, because he earned their respect by doing things the right way in the ring. Aldis demands that his contenders also do things “the right way” and takes a seat at ringside.

A brawl breaks out before the opening bell. Homicide catches Isaacs with an overhead belly to belly suplex, but Isaacs quickly answers with a power slam. Lattimer tags and continues the assault until Homicide surprises with a DDT off the buckles. Outlaw Inc double team Lattimer and Kingston gets 2 with a lariat. The Wild Cards isolate Kingston, despite his biting. Kingston takes a beating but hits a uranage. Homicide gets the hot tag and unleashes a flurry on Lattimer. Homicide suplexes Isaacs for 2. Jim Cornette gets carried away on commentary, ranting that the NWA doesn't have midgets or cosplay wrestlers, just men competing for real prizes. Meanwhile, Kingston desperately charges at Lattimer, but his knee is too hurt to hit a suplex. Lattimer zeroes in on the bad knee, and the match breaks down until everyone hits the mat. Wild Cards knock Homicide off the top and he lands near Aldis at ringside. The Wild Cards double team Kingston, hitting a powerbomb into the Hush Money and the champs retain at 7:18. This was a bit clunky at times, but had an invested crowd, well defined babyface challengers, and plenty of drama in the closing moments.
Winners and still NWA Tag Team Champions: The Wild Cards

Kamille shows up by surprise and argues with Aldis, as the Dokken theme song plays them out. Final Thoughts: If you've been meaning to give Powerrr a chance but haven't yet, don't start with this episode. It was fine as a middle chapter, but that's about it.