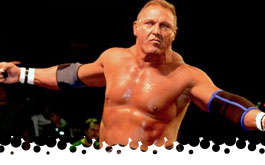 Episode 12: "Something Left to Prove."

Cold open video package highlighting the history between Tim Storm and Nick Aldis, leading up to Aldis going full heel, while Storm hams it up as the proud son of "Mama Storm."

David Marquez interviews Tim Storm at the desk. Storm is pleased to be facing Nick Aldis in the TV title tournament. He says that Aldis treats wrestling like a business, but he treats wrestling like his life and plans on kicking his ass. Aldis and Kamille interrupt, and Aldis stirs the pot by suggesting that Storm is on the verge of a heart attack. Aldis thinks he's gotten under Storm's skin and dares him to "embrace the hate." Aldis challenges Storm or any of the other "Randy the Rams" in the back to step up to him. Tremendous mic work from both guys.

National Champion Aron Stevens and The Question Mark talk backstage. Stevens puts over the Mongrovian Spike, as they've proven it can be hit at any direction. They have the power of karate and will soon have all the belts.

Stevens teases karate shots and scores a single leg takedown. Stevens shows off with a Judo throw. Back leg sweep by Stevens but Rinauro escapes an armbar in the ropes. Rinauro rallies but Stevens blocks a Figure Four. Stevens hits a "karate clothesline" and applies the "Mongrovian Clutch" for the win at about 3:00. Fine squash that was about entertaining character work than intense action.
Winner: Aron Stevens

Trevor Murdoch interrupts Stevens' post match interview, calling him an ass for picking on others. Stevens advises Murdoch to wash his shirt and accuses him of fishing for a National title shot. Murdoch says he doesn't want a shot, only wants to kick some ass. Stevens agrees to a match only if Murdoch puts his spot in the TV title tourney on the line, but jumbles his lines, earning a "You can't talk" chant. Murdoch agrees to the stip, in order to prove who the real man is.

Murdoch immediately hits an elbow shot, flustering Stevens. Murdoch blocks a roundhouse kick and delivers a scoop slam. Side Russian legsweep by Murdoch sets up a modified head scissors, but Stevens gets the rope. Murdoch continues to dominate and applies an Indian Deathlock for the win at 3:10. Storyline-wise, this was fun because Murdoch was fresh, but he still looked great in victory.
Winner: Trevor Murdoch

The Pope talks to Homicide and Eddie Kingston in a casual interview format. Pope puts them over as threats to the tag titles, and Homicide reminds us that he's a former World Champion in Ring of Honor. Then it just ends as abruptly as it began.

Hard Times hype video set to, um, "Hard Times" by Billy Corgan. I like this.

Joe Galli hosts Eli Drake at the desk about his New Year's plans. Drake plays with the fans, getting over a ‘YEAH!' catchphrase, sort of apologizes for being drunk last week, and complains about not getting booked for a match yet again. Drake accuses Nick Aldis of pulling the strings to keep him out of the spotlight, so he must be scared. He agrees with the things that Ricky Morton has been saying, and if Aldis won't fight him, he'd be happy to. Drake wants a tag partner, but won't consider 2-time loser, Mr. Anderson. Colt Cabana interrupts, as he's tired of hearing him bad mouth his buddy, Anderson, because he's a good dude. Drake only wants to know if Colt will team with him, but Colt rejects, because he wonders if Drake is not a good guy. Drake declares that Colt will never be a tag team champion, so Colt rubs his 2 NWA championships in his face. Drake wants a fight, and Mr. Anderson arrives right on cue, and Colt and referees have to separate them. I guess that feud isn't over and now Eli is the heel? This was more great talking from everyone involved, except this segment muddied the storyline.

They lock up and trade wristlock reversals. Steelz hits a sideheadlock takedown, but Belle counters with a leg scissors. Steelz escapes via head stand and mocks with a hand gesture. Belle cuts her off with a big boot for 2. Vertical suplex by Belle, who then stomps a mudhole in the corner. Belle misses a running hip check and Steelz makes a comeback. Swinging neckbreaker by Steelz gets 2. Steelz follows with a Cutter for the win at 4:45. Perfectly solid TV match.
Winner: Tasha Steelz

Melina is FURIOUS with Belle for the loss and lets her know it.

It's time for Tim Storm vs. Nick Aldis, but the latter shows up not dressed for action, accompanied by his cohorts, Thomas Lattimer, Royce Isaacs, May Valentine, and Kamille. Aldis says he entered the TV title tournament for fun, but Storm has taken all the fun out. The fans chant "coward" and Aldis mocks them for making the most "PG" chant he's heard. Aldis brands his new stable to be "Strictly Business" and says he can't risk injuring himself in an unimportant tournament match and is happy to give Storm a Bye. Storm says Aldis talks and talks and talks, and until recently, he's been able to back it up, but now he's exposed himself as a coward. That's enough to goad Aldis to the ring, or so it seems, as he backs off at the last second. Aldis orders Isaacs to wrestle in his place.

Don't forget about the 6:05 time limit! It's all Storm early on, as he clubs Isaacs around in between mocking Aldis for being all talk. Lattimer distracts, allowing Isaacs to hit an exploder suplex for a 1 count. Isaacs follows with punching… lots and lots of punching. Isaacs misses a second rope senton, and Storm rallies. Isaacs counters into a cutter, but Storm breaks the pinfal with a rope break. Storm answers with The Perfect Storm for the win at 4:25! Highly enjoyable TV match.
Winner: Tim Storm

Aldis pouts over the outcome and doesn't see the Rock N Roll Express sneak up on him. Morton warns him to never turn his back on an opponent.

Final Thoughts: Routinely brisk and enjoyable edition of Powerrrr. I'm not sure what's going on with Eli Drake, but everything else clicked.