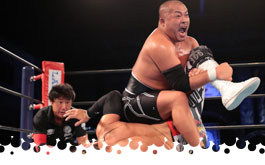 -From Osaka, Japan. Our hosts are Kevin Kelly and Rocky Romero.

It's kind of funny how much of a size advantage Robinson has over the rather scary Ishii, and he wins a running-the-ropes exchange with a shoulder block. Umino tags and Ishii no-sells everything he does. SHO tags and continues to beat up on the young lion. Umino gets tired of being disrespected and finally hits Ishii hard enough for a reaction, and follows with a missile drop-kick. Robinson returns and dominates Ishii with a cannonball. Ishii is selling injuries from his Omega match and is in a daze while Robinson jabs him. Ishii saves himself with a vertical suplex and tags in SHO, who gets dropped hard. Umino gets a hot tag of sorts and manages a spinebuster on Ishii. Robinson spinebusters SHO and sets him up for Umino's missile drop-kick. Ishii saves SHO From the Boston Crab, and Robinson dispatches him with a crossbody to the floor. Umino hangs with SHO for a while but succumbs to a bridged German suplex at 8:12. Just a match, but a good showing for the young guys, **.
Winners: SHO and Tomohiro Ishii

-Umino has to be carried out of the ring, as Robinson shows a considerate level of concern.

Naito cheap shots at the opening bell but gets whipped into his partner in short order. Naito eats a double suplex for an early 2 count. Henare turns his back long enough for Naito to hit an opportunistic neckbreaker. Henare and Naito have a miscue while running the ropes, but Henare salvages it with a headbutt. Finlay returns with a head of steam and hits running forearms. Naito mistimes ducking Finlay in mid-air for another blemish on the match. Finlay rebounds with a belly to back suplex on SANADA. Henare tags and hits Sanada with a Samoan drop. Henare's spinebuster gets a 2, but SANADA retaliates by drop-kicking the knee. SANADA blocks a suplex and Henare submits to Skull's End at 6:41. This was sloppy and phoned in, *.
Winners: SANADA and Tetsuya Naito

-Naito attacks SANADA after a fist bump but manuevers into his relaxation pose as if to say "Just messing with ya."

YOH seems happy to not be tagging with Jay White and shows some fire against Michinoku. ZSJ Tags in and goes right to work dismantling various body parts. Michinoku disrespects YOH while beating him down, and there's seemingly not much YOH can do about it, well, except tag in a fired up Goto. ZSJ eats a Saito suplex but reverses into a fancy submission. Goto springs up for a clothesline and serves ZSJ to YOH, who quickly falls victim to arm abuse. YOH finally catches Taka with a superkick and Falcon Arrow for 2. Taka comes back with a crossface while ZSJ wraps himself around Goto. Michinoku reverses YOH'S O'Connor roll, but YOH reverses a pinning predicament for the win at 5:39. Not a bad story here, with YOH being in completely over his head until pulling out a crafty victory, **.
Winners: Hirooki Goto and YOH

Yujiro Takahashi (with a stripper) and Kota Ibushi vs. Guerrillas of Destiny (Tama Tonga and Tanga Loa)

The Tongans try to recruit Takahashi to their side before the opening bell, but then end up blindsiding him and Ibushi. After a brief brawl, the match settles into Loa power slamming Takahashi and serving him up for Tama to slap and headbutt. Ibushi storms the ring to save Takahashi from a double team, but Loa flips him with a lariat. Ibushi hits Tama with a missile drop-kick and wipes him out at ringside with a crossbody. Meanwhile, Loa delivers Ape Shit and pins Takahashi at 3:35. Just a squash to build up the Tongans, *.
Winners: Tama Tonga and Tanga Loa

Gedo squares off against Owens and gets an advantage by attacking the face. Omega helps Owens drop double elbows on Gedo, followed by snapping his legs wishbone style. Yano tries to help, and he and Gedo suffer the same humiliating wishbone leg stretch. Bullet Club continues to work Gedo over until Yano gets a hot tag and immediately unwraps a turnbuckle. Omega and Owens stop him and take the paddings for themselves, but they miss their swings and hit each other. Yano and Omega simultaneously go for the hair, get tripped, and escape full nelsons in stereo (which is far more amusing than it reads). The match breaks down and Owens gets down to business, hitting Gedo with a package piledriver for the win at 6:37. The Yano segment was a ton of fun, otherwise this was just a match, **¼.
Winners: Kenny Omega and Chase Owens

YOSHI-HASHI looks to use his speed but Fale grabs him by the hair and no-sells some shoulder blocks. Loa trips YOSHI-HASHI up and Fale clotheslines him to the floor for a Loa suplex. Fale picks apart YOSHI-HASHI, including targeting his bandaged shoulder. YOSHI-HASHI connects with a desperate neckbreaker to gain some traction on offense. Top rope neckbreaker by YOSHI-HASHI gets a 2 count. Fale blocks the Fisherman Buster and delivers a big splash for 2. YOSHI-HASHI builds some steam, despite Loa's interference, and superkicks the back of the head. Codebreaker on the interfering Loa, and double knees to the face of Fale! YOSHI-HASHI applies a cross armbreaker but Tama Tonga storms the ring with a chair and it's a disqualification at 8:30. The match wasn't pretty, but I was getting behind YOSHI-HASHI leading up to the abrupt finish, **¼.
Winner via DQ: YOSHI-HASHI

-A 3 on 1 assault leaves YOSHI-HASHI down and out. Tama Tonga heads into the stands to attack a fan for taunting him, which I'm sure you've heard all about by now. He ends up beating up a security guard instead and then sneaks into position to ambush YOSHI-HASHI again.

Page is a man on a mission and clears out Desperado before engaging Suzuki in a brawl into the aisle and ramp. Suzuki and Desperado are considerate enough to stand still while Page telegraphs and hits a moonsault off the stage. Back to the ring, Suzuki kicks out of a cover and applies an armbar. Page is gingerly holding his arm while being driven into the barricade. Suzuki drives a non-folding chair against the hurt arm and buries him under furniture. The referee is nice enough not to count anyone out and tolerates Suzuki grabbing him by the collar. Back to the ring, Page connects with a desperation clothesline and punches his way back into it. Overhead slam by Page seems to annoy Suzuki more than anything. They trade shots and Page spits at Suzuki for running his mouth. Suzuki slips into a choke hold but Page counters into a discus punch and superkick. Page connects with a lariat but Suzuki counters back to the choke hold. Page reverses a spike piledriver into the Rite of Passage for the win at 11:58! That finish was all kinds of awesome. Page really shined here, coming across as both an ass-kicker and resilient, ***.
Winner: Hangman Page

White is aggressive in the early going, but Makabe clears him with a shoulder tackle. White side steps Makabe's head of steam and proceeds to thrash him into the rails and apron as per usual. White slaps the back of the head mockingly, which inspires Makabe to throw a chop and hit a power slam. White is fighting from behind as Makabe nails a suplex for 2. Desperation Saito suplex by White buys some time. Spinning vertical suplex by White gets 2. Makabe absorbs a series of shots and dares White to hit him even harder. This throws White off his game as he runs into some standing lariats, but he recovers with a snap suplex, followed by a German suplex. Makabe pops up for a lariat and they both go down. White blocks a super German, but Makabe improvises with a toss out of a tree of woe. Suplex by Makabe but he wipes out on a top rope maneuver. White swings a chair, but Makabe clotheslines it into his face. The ref takes a bump thanks to White, and Makabe takes a chair shot. White's Blade Runner neckbreaker ends it at 10:20. This had a good flow throughout most of it and I feel disgusted at White for the right reasons, ***.
Winner: Jay White

-White beats up a member of the ring crew for good measure, as well he should.

Elgin is still sporting a heavily taped shoulder, which has been his story for the tournament, as least when he remembers to sell it. Tanahashi escapes a Greco-Roman knuckle lock, but Elgin pops out of his headlock. Elgin catches Tanahashi for an electric chair slam. Elgin works Tanahashi over with a series of crisp power moves. Tanahashi punches his way back into contention. They simultaneously block kicks but agree to let go at the same time, which is cool to see in a face vs. face match. They exchange dragon screw leg sweeps. Overhead belly to belly by Elgin and a Falcon Arrow for 2. Tanahashi counters with a dragon screw off the second rope! Elgin survives a Texas Cloverleaf and scores a superplex! Some reversals result in a deadlift powerbomb by Elgin! Tanahashi absorbs a buckle bomb and pops up to hit Sling Blade! Elgin attempts rolling Germans but Tanahashi fights out and hits a neckbreaker. Elgin rolls through a flying crossbody, avoids any power moves, but Elgin knocks him down with a lariat. Splash Mountain by Elgin only gets 2! Buckle Bomb by Elgin, but Tanahashi counters into an inside cradle for the win at 16:00! Just a simply excellent match that kept a deliberate pace that built to a crescendo and ended right as it was peaking, ****.
Winner: Hiroshi Tanahashi

The crowd is pumped for this, giving it cool "big match" feel. EVIL teases a quick upset with a decapitation lariat. Okada answers with his neckbreaker. They head to the floor, where EVIL reverses a vicious Irish whip and wraps Okada's head in a chair before driving him into the ring post. EVIL takes his time dishing out offense while in control. Okada rallies with a series of quick elbow shots, and a flapjack gets 2. Okada misses a drop-kick and EVIL hits a back senton. They jockey for position on the apron and both end up taking a bump into the guard rail. EVIL directs Okada to the long, slopey, entrance ramp, where Okada counters with a DDT and shotgun drop-kick! Back to the ring, Okada hits another shotgun drop-kick, followed by top rope missile drop-kick. EVIL shields himself with the referee and then props Okada on the ref's shoulders for the Magic Killer! EVIL hits Darkness Falls for a 2 count that no one bought. Okada looks for Rainmaker, but EVIL steals the move for a nearfall that the crowd did buy into. Half Nelson suplex by EVIL and a hard lariat get a red hot nearfall. Okada is unable to hit Rainmaker again but settles for a TKO for another great 2 count. Tombstone piledriver by Okada but EVIL reverses Rainmaker again! Okada blocks a TKO and delivers a pair of Rainmakers for the excellent victory at 18:14. This told a nice story of Okada struggling to hit his signature moves and EVIL teasing a big upset, and it ended right as it was peaking, ****.
Winner: Kazuchika Okada

Final Thoughts: This show got progressively better once the tournament matches started. Otherwise, this was a bit of a drag, and it took me almost a week to get through it all. If you're behing in the G1 shows, you can probably skip this one. Thumbs in the Middle.