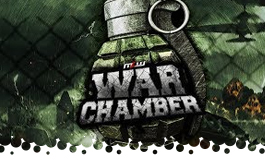 Taped from the 2300 Arena in Philadelphia, Pennsylvania. Our hosts are Joe Dombrowski and Rich Bocchini.

Cesar Duran comes to the stage to hype the main event. 2022 will be about aggressive expansion, which means MLW will be holding events in Mexico.

Video promo - Mads Krugger is ready to lead CONTRA soldiers into the "final battle" that is War Chamber. He's on a mission to break Alexander Hammerstone's spirit.

Video package highlights the construction of the War Chamber structure spliced with footage of the Hammerheads training and getting mentally prepared.

CONTRA has been invading MLW for the past 2.5 years, and this is billed as the grand finale. This is MLW's answer to War Games, with a wired cage surrounding a single ring. Jacob Fatu starts for CONTRA, Cesar Duran brings his brother, Matanza Duran to the ring. Matanza unmasks and reveals himself to be JEFF COBB. Fatu and Cobb have 5 minutes along for their hoss fight. Fatu takes over with hard Irish whips. Cobb comes back with a power slam. Sentai Death Squad Soldier #1 joins the fight and takes Cobb down with a Black Hole Slam to send us to commercials. They return with Cobb suffering a 2 on 1 beatdown. Savio Vega joins the match with kendo stick in hand, and cleans house on CONTRA. Ikuro Kwon is out next to give CONTRA the numbers advantage again. Richard Holliday joins the match with a backbreaker on Kwon. He hits the Soldier with a back suplex, and reverses (?) Fatu's avalanche neckbreaker. The ring has become awfully crowded. Sentai Death Squad Soldier #2 is next, and allows CONTRA to regain control with kicky/stompy offense to send us to commercials. They return just as EJ Nduka joins to even things up for the Hammerheads. Nduka cleans house in a spiritual hot tag and looks monstrous (like, how did WWE let this guy go?). Mads Krugger is the final CONTRA entrant and goes right after Nduka for a hoss brawl. A third Sentai Death Squad member guards the door, but Hammerstone gets right by him and takes his turn to clean house. There's a lot of bodies stuck in a relatively small space. Krugger cuts Hammerstone off with a chokeslam. Hammerstone answers with a Nightmare Pendulum, and shucks, we need a third commercial break. They return with Fatu and Hammerstone finding each other for a slugfest. Fatu applies an ankle lock, but Holliday assists and shoves Fatu into Krugger. Fatu misses a springboard boot and takes Krugger down. Hammerstone snapmares Kwon into position for a pump kick. Kwon submits to Hammerstone's Torture Rack at 22:46! The Hammerheads win! Well, if this is it for CONTRA, this was kind of anticlimactic with a pawn like Kwon taking the loss. This still makes for a feelgood win for the Hammerheads, and sets up a potential feud between Fatu and Krugger, ***.
Winners: The Hammerheads

Kwon tries to play peacemaker between Krugger and Fatu, who accuse each other of f*cking things up. A brawl breaks out, Kwon turns on Fatu, and eats a Samoan Drop. Krugger tackles Fatu to the floor, but Fatu swings the door into Krugger's face. Fatu continues taking out his frustration with chair shots to various Death Squad members. Security rushes in to hold the men back, but to little avail.

Final Thoughts: Well, this was (literally) a one match show, and that match was pretty good, but lacked the intensity and attention to detail of history's great War Games-style matches. This is still a pivotal episode of MLW that shouldn't be skipped.