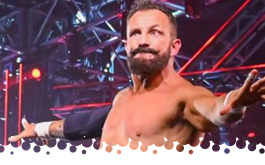 A nosy reporter ambushes The Hammerheads and Alexander Hammerstone for an update on his injured ankle, but EJ Nduka tells him to buzz off. Meanwhile, Richard Holliday tells his friend “Max” that it's okay if he's too busy to join the War Chamber team. Cesar Duran arrives to pitch a final member for their team, but they don't trust him and are sick of his riddles. Duran dangles a key and leaves.

Taped from the 2300 Arena in Philadelphia, Pennsylvania. Our hosts are Joe Dombrowski and Rich Bocchini.

This is meant to be a six man tag, but the original Park is MIA after a previous backstage altercation. The match starts as the two junior Parks brawling with Rivera and Boogie. Homicide arrives as a late surprise (and you've never seen pure happiness like Julius Smokes dancing for joy). The final Park arrives to even the odds and the Parks hit triple dives. A young Park catches Boogie with a German suplex and Destroyer for 2. Boogie suplexes Park into a board, and LA Park hits a blatant chair shot for the DQ at 5:18. The guys keep fighting anyway, Rivera hits a corkscrew plancha. Homicide looks for the Gringo Killer, but settles for a tope con hilo instead. OG Park hits a mean spear on Boogie. The brawl spills out to ringside and Los Parks gain the upper hand with their educated chair shots. This match and segment felt like the Attitude Era with the volume turned way up.
No Contest

CONTRA propaganda video package. Josef Samael talks a lot of trash about The Hammerheads, and they won't be able to run or hide in the War Chamber.

Meanwhile, 5150 and Los Parks brawl into the loading dock area. El Hijo's face gets ripped off, and Los Parks surrender to cover his face.

This match is what happens when you let Sophie book the show on EWR. The good guys clear out the bad guys. WARHORSE and Ku start with the exchanging of chops. Shotgun dropkick by WARHORSE, but he misses a flying double stomp. Kwon ambushes WARHORSE with a gut wrench back stabber to eliminate him at 1:56. Nduka hits King Mo with a spinebuster to pin him at 2:15. Ku lights Nduka up but eats a Powerbomb and pinfall at 2:35. This is turning into the worst kind of elimination tag match that buries everyone. Back from commercials, Holliday and Nduka are doing the “CAN THEY GET ALONG?!?” shtick. Navarro takes advantage with a dive onto Holliday. Frog splash by Navarro but Holliday kicks out. Zenshi tags himself in, misses a leg sweep, and eats Navarro's double stomp. Navarro hits an extra flippy head scissors but Zenshi lands on his feet. Zenshi hits a modified Blue Thunder Bomb for 2, and hits a double Pele kick on Navarro and Kwon. Beast Man enters and slows Zenshi down with a fallaway slam. Beast Man nails a corner cannonball to pin Zenshi at 6:46. Vega lights Beast Man up with a kendo stick. The ref takes away the stick, and Beast Man hits a splash to pin him at 7:37. Blue Meanie dances in and challenges Beast Man to a sumo fight. Kimchee grabs Meanie's leg and Beast Man finishes with a splash at 9:03. Nduka throws Kimchee into the buckles and Beast Man splashes his own guy with a missed dive. Nduka plants Beast Man for the pinfall at 10:00 and pins Kimchee too (for good measure). Medina and Holliday square off with chops. Holliday's power slam gets 2. They spill to ringside and brawl away, Kwon helps with a superkick on Holliday, who gets counted out at 11:50. It's now Nduka alone against Kwon, Medina, and Navarro. Spinebuster finishes Medina at 12:25. Spinebuster finishes Navarro at 12:48. The Verdict finishes Kwon at 13:20. I don't think matches like this should ever be made unless you plan on devoting 30+ minutes to it, the rushed eliminations hurt the guys getting pinned and don't really help the guys who are theoretically getting put over, *.
Winner: EJ Nduka

Cesar Duran has a friendly conversation with Willow Nightingale in a dimly lit room. Willow credits Duran for coming up with the craziest matches of the century and wants to work with him and gain the Middleweight title. Duran excuses himself.

NZO is still coming soon. Does he have to?

Jacob Fatu fights his way past some goons for a conversation with Duran. Fatu is still fuming over having lost the MLW title. Duran tries to turn Fatu against Josef Samael, but Fatu won't hear any of it... for now.

Davey won't shake Fish's hand, but WILL give him a fist bump. They lock up and tease KO kicks. They exchange holds until Richards connects a stiff kick to Bobby's arm. Fish clotheslines Richard's feet out from under him on the apron and lights him up against the rails. Davey is forced to play defense but hits a knee lift to send us to commercials. They return with Davey working over the arm. Fish comes back with a series of kicks. Fish lifts Richards into the buckles and nails a vicious dragon screw. Low clothesline by Fish gets 2. Richards blocks a slingshot senton, but Fish reverses a kick into the Fish Hook! Richards reverses into a Sharpshooter, but Fish counters with a roll-up for 2. They hit stereo kicks, but Richards shakes off the effects for the ankle lock. Brainbuster by Richards gets 2, so he goes back to the ankle lock. Fish taps at 12:08, ending a serious, physical contest, ***¼.
Winner: Davey Richards

Fans give Richards and Fish a standing ovation. Richards offers another handshake, this time Fish accepts and they hug it out.

Alicia Atout interviews The Hammerheads backstage. They are contemplating taking Duran up on his offer of using the key to summon "his brother."" They've added Savio Vega to their team, Richard doesn't like it because he's "not a babyface like us." Hammerstone argues that Holliday is really a tweener. They joke around about how Richard is obviously going to betray Hammerstone later. If you think AEW is too meta, stay away from this. Hammerstone explains that Duran's mind games aren't working.

Final Thoughts: Take away my displeasure with the elimination tag match, and you're left with a really good hour of episodic wrestling TV. I think there are a lot of people out there who aren't watching MLW that would be enjoying it if they were.