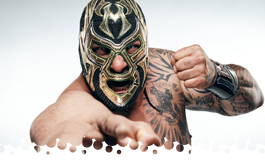 Taped from Auditorio de Tijuana, in Tijuana, Mexico. Our hosts are Rich Bocchini and Joe Dombrowski.

Cesar Duran welcomes the large crowd to the best Lucha Libre show in the world.

Only Myzteziz gets an entrance. I’d be lying if I said I could tell them all apart. They keep a quick pace from the opening bell and stuff just keeps happening before I can process what’s just transpired. The fans sure are enjoying the stunt show, which isn’t short on high flying moves to outside. Black Destiny hits a super cutter on Dinamico. There are no tags, lucha rules and all, so the action quickly moves on. Aramis counters Skalibur’s superplex attempt with a big moonsault onto his feet. Dinamico interrupts Aramis with a tilt-a-whirl backbreaker. Skalibur hits a crazy 630, leading to rapid flying attacks for a near triple pinfall. Back from commercials, they stumble up for a 3 on 3 brawl. Another diving sequence results in double nearfalls. Dinamico hits a springboard senton to outside, leaving Aramis to hit an airplane spin slam on Arez to win at 7:35. This delivered exactly what was promised, **¾.
Winners: Aramis, Black Destiny, and Myzteziz Jr.

Video recap of Alex Kane winning the Middleweight Championship, starting the Bomaye Fight Club, and feud with Calvin Tankman. Alicia Atout interviews Kane about the issue with Tankman, who recently went to jail for carjacking him. Kane denies that he’s afraid of Tankman and calls him a crybaby. Kane promises to make Tankman submit while the fans chant BOMAYE!

Cesar Duran enjoys some time with Karlee Perez, who offers up a cryptic tale of the scorpion. They’re joined by King Muertes, which brings us to the unpleasant topic of sacrifice. Duran has a myth, a creature, to fight by his side. Their enemies are basically toast.

Video recap of Alexander Hammerstone spurning Duran, which has made life hard for him around MLW.

Alicia Atout joins commentary at Holliday’s request. She says no to him so often, she figures she should throw him a bone. Bell rings, and they play for crowd support, with Psycho earning cheers and Holliday getting jeers. They gradually lock up, Psycho clotheslines them both over the ropes. Psycho hits a tope suicida. Psycho signals another dive, but Holliday stops him with a punch to the face. Back from commercials, Psycho makes a routine comeback. Holliday answers with a Torture Rack slam. Holliday is distracted when Duran’s henchman removes Alicia from commentary, and Psycho hits a top rope Spanish Fly for the win at 10:45. Boring match that served as a backdrop for the angle with Alicia, *.
Winner: Psycho Clown

Psycho Clown celebrates with a pair of mini clowns.

Video promo with MLW Tag Team Champions 5150. They say the Von Erichs are barking up the wrong tree, especially if they think they’re taking their gold. 5150 are the champs for a reason.

Hype video for the returning Bestia 666.

The Von Erichs are training in Hawaii, er, a dark studio. Kevin Von Erich calls the boys over for a pep talk. They can’t let up if they intend to end the family’s 40 year championship drought.

Richard Holliday confronts Cesar Duran about Alicia Atout’s whereabouts. Duran says the abduction was for her own protection and introduces him to a local police detective, who has questions about a recent club incident. Holliday is dragged away, but Duran will be hearing from his lawyer. Duran’s plan is in motion.

There’s no rules, so they brawl with no regard to tags. Taurus dismantles Pagano in the ring while Muertes takes weapons to Hammerstone at ringside. Hammerstone fights back with a chairshot. They hit the ring, Hammerstone hits an overhead belly to belly suplex. Muertes answers with a power slam. Taurus drags Pagano in by the hair and smashes a cookie tray over his head. The brawl heads back to ringside and into the front row. Hammerstone kicks Taurus in the face, meanwhile Muertes and Pagano head up the stage. Back to the ring, Taurus and Muertes dominate with weapons attacks. Back from commercials, Pagano and Muertes find themselves alone for a slugfest. Rana by Muertes, and then a spear, but Hammerstone saves the match. Hammerstone puts Muertes through a plastic trash can with a TKO for only 2. Hammerstone leans a floor board in the corner, but Taurus cuts him off with sling blade. Hammerstone puts Taurus through the board with a back body drop. Pagano hits Muertes with a blockbuster. Hammerstone and Pagano hit Taurus with a springboard doomsday clothesline. Hammerstone hits Muertes with a German, and then a powerbomb. Pagano takes Taurus down with a dive, leaving Muertes to hit a lungblower on Hammerstone for 2. Pagano puts Taurus through a board with a DVD. Meanwhile, Hammerstone finishes Muertes with the Nightmare Pendulum at 15:27. Substandard main event weapons brawl, mostly thanks to the fans not reacting to anything, **½.
Winners: Alexander Hammerstone and Pagano

Cesar Duran arrives to threaten Hammerstone with a throat cut gesture. Pagano then turns on Hammerstone and takes him down with a lid. Pagano is suddenly aligned with Taurus and Muertes and they lay waste to Hammerstone.

Final Thoughts: Kind of a quiet show this week, although it was neat seeing MLW in a larger building. The Duran/Hammerstone feud has a lot of legs left to it, though I’m not convinced that Hammerstone is up to the task of being the Stone Cold to Duran’s Mr. McMahon. Guess I’ll let it play out and see where it goes.